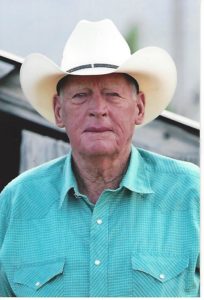 Orvel Allen Bundy, 82, passed away July 17, 2016, at his home in St. George, Utah. He was born November 1, 1933 in Mt. Trumbull, Arizona, to Roy and Doretta Iverson Bundy. He was the youngest of twelve children. He went to school in the one room schoolhouse at Mt. Trumbull and later in St. George. He met his wife, Sara Berry Hamilton (Sally), while they both worked at Eaton Ranch near Sheridan, Wyoming. They were married on June 9, 1956 in Ardmore, Pennsylvania. Their marriage was later solemnized on June 9, 1962, in the St. George LDS Temple.

Orvel and Sally purchased his parent’s homestead at Mt. Trumbull in 1960 and he spent most of his life doing what he loved, ranching. He was known for his prayers for rain. He loved and knew each of his cows. He enjoyed deer hunting and cooking sourdough biscuits. He bribed his grandchildren with jerky and Jolly Ranchers for hugs and kisses.

Orvel loved being the door greeter for the St. James LDS Ward. Bishops came and went, but he kept his beloved calling. He was a stalwart member of the church and was deeply devoted to living the gospel. He has left a legacy of faithfulness and humility for his posterity.