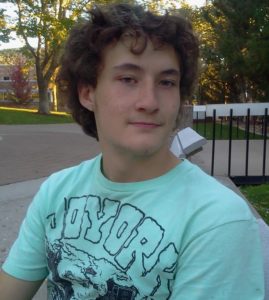 Derek was born on Feb. 28, 1997, in Cedar City. He passed away peacefully at home on June 21, 2016, surrounded by family and his hospice nurse who has been by his side helping him fight a battle with cancer. He was a member of The Church of Jesus Christ of Latter-day Saints.

From the moment Derek learned to ride a bike, he never stopped; you would spot Derek all over town jumping off walls, stairs, railings and dirt piles. At the skate park, he was determined to perfect certain BMX moves. To earn money for his bike, he started at a young age delivering the Iron County Newspaper.

Derek loved rock climbing with anyone that was willing to invite him. He became so confident and fast he could climb a rock face quickly and with no safety ropes attached.

Derek was involved in Cyber Core and FBLA. He took 1st place at State and went on to Nashville, Tennessee, for Nationals. Every year he loved staying up all night programming at Code Camp. He attended Southern Utah Computer Program Camp and was accepted to learn how to create apps at BusyBusy.

He loved spending time with his brothers and sister, along with his cousins and grandparents, camping, hiking and taking road trips to the new adventures awaiting.

April 21, 2015, changed our family. Derek was diagnosed with bone cancer called Osteosarcoma, and tumors were discovered in his lungs. Derek never complained. He found laughter during the worst moments. He was greeted with hugs because of the humor he brought with him.

On graduation day, Derek was receiving Chemo at PCH. His sister, Alissa Hoyt, accepted his diploma for him while SUU livestreamed the graduation.

Derek is survived by his parents, Kirsten and Jeffrey Catella and Carlon Hoyt; his siblings Jason Catella, Dawson Hoyt, Alissa Hoyt and Kevin Catella; grandparents Richard and Barbara Gull of St. George and grandmother Julia Clorene (Errol) Hoyt of Fredonia, Arizona. He is also survived by aunts and uncles RaJan (Hoyt) Meiner of Peoria, Arizona; Ed and Julie (Hoyt) Hawkins of Blanding; Charrena (Hoyt) Barton of St. George; Kelly and Misty Hoyt of Santaquin; Jason and Mary (Gull) Shakespear of Cedar City; Dean and Liz Gull of Maryland; Alice Gull of Pennsylvania and Thomas Gull of St. George; and many cousins that love him.

Thank you to the doctors and nurses at Primary Children’s Hospital, Huntsman Cancer Hospital, Cancer Center in Cedar City and Cedar Hospital. A special thank you to IHC Home Health, April, Haley and Craig, for being there every step of the way. We love you!

Derek has requested in lieu of flowers, your generous help to pay it forward by making a donation to Natty’s Wish Foundation, which helps teenagers with cancer fulfill their wish. A box will be available at both viewings.