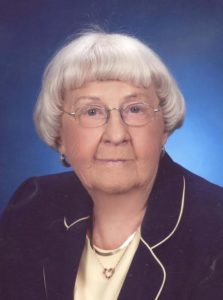 Dorothy’s father worked for Union Pacific Railroad, first in Salt Lake, then in Pocatello, Idaho, and Portland, Oregon, before returning to Salt Lake to continue has career. Dorothy attended East High School in Salt Lake City and the University of Utah. She was affiliated with Kappa Kappa Gamma Sorority.

After they were married, Dorothy and Ted continued to live in Salt Lake where he owned a business with his two brothers. As well as supporting Ted in the business, Dorothy was content to be a homemaker and mother. She was also an active member of the Salt Lake City P.E.O. chapter, and she and Ted were members of Hidden Valley Country Club.

Ted retired in 1979, at which time he and Dorothy moved to St. George where they thoroughly enjoyed their retirement years. After joining the Bloomington Country Club, Dorothy became an avid golfer. She was a superb bridge player, which she continued to enjoy into her 90s. She was an original sponsor of the St. George P.E.O. chapter, and she and Ted were two of the original members of the Good Shepherd Presbyterian Church.

She was preceded in death by her brother, Roy; her daughter, Bonnie; and a granddaughter, Anne.

In lieu of flowers, please make a donation to the Good Shepherd Presbyterian Church or the charity of your choice.