According to the press release, officers responding to a report of a trespass in progress learned that the suspect who had already left the scene was Webb, 21, of Hurricane. Webb was wanted on multiple outstanding arrest warrants and was possibly armed with a gun, the release states.

Golding said officers then saw Webb driving a vehicle in Hurricane and tried to pull him over, but Webb sped off at a high rate of speed toward LaVerkin. Officers began pursuing Webb, but lost sight of the vehicle for a short time after it entered a LaVerkin neighborhood.

Officers later found the vehicle the man was driving parked near the rear of a residence. As officers approached the house Webb was seen running toward his vehicle, and despite numerous warnings by police to stop he quickly got in the car and started backing up, directly toward two officers standing behind the vehicle, Golding said.

Officers shouted several commands for Webb to stop the car and when he continued, one officer fired his handgun four times at the vehicle. Webb changed gears and began pulling the vehicle forward and the same officer fired another three rounds toward the car.

At that point the man stopped the vehicle, jumped out and began running. Officers pursued him on foot and were able to quickly take Webb into custody. Five of the officer’s rounds hit Webb’s vehicle. Webb was not hit by any of the shots.

Webb received minor injuries from a barbed-wire fence during the foot chase, but was otherwise unharmed.

The officer who fired his weapon was taken to the hospital to be treated for minor injuries related to the capture and arrest of the subject, and was later released in good condition.

Information on a second suspect who was in the vehicle when the incident began was obtained, however that suspect fled and is still at large at the time Golding issued a press release.

Webb was booked into Purgatory Correctional Facility Thursday on 11 charges that include two felony counts of aggravated assault with a weapon, two counts of auto theft, felony evading, and numerous misdemeanor charges.

Anyone with information regarding this case can call Barry Golding at 435-634-5723.

The initial story on this incident, published early Thursday morning, is below.

LAVERKIN — A man fleeing police refused to stop his vehicle at law enforcement commands Wednesday evening, instead driving straight at one of the police officers who fired his weapon at the suspect.

The incident began at 6:53 p.m. when Hurricane Police officers responded to a trespassing call in progress and found the suspect had just left the scene in a vehicle, Hurricane Police Sgt. Brandon Buell said.

While investigating the trespassing incident officers also came upon what they believed to be a stolen vehicle at that location.

Meanwhile, officers located the man described in the trespassing incident at another location in Hurricane and when officers attempted to stop the vehicle the man was driving, he sped away, Buell said.

Officers began a pursuit, which continued into LaVerkin where they lost sight of the suspect for a time. When authorities spotted the man in his vehicle and approached him, the suspect drove directly at the pursuing officers with his vehicle.

The suspect then stopped and jumped from the vehicle and fled on foot, with several officers close behind. When officers caught the man he became combative and started fighting, but was taken into custody.

The chase ended in the 70 North block of 60 East in LaVerkin, where an entire block was cordoned off. Over a dozen law enforcement officers and investigators responded from various agencies.

Authorities received reports of a second suspect that fled on foot in LaVerkin during the time that officers lost sight of the vehicle there. That subject is being sought and is still at large at the time of this report.

The Washington County Critical Incident Task Force was called in to investigate the incident. One officer was placed on administrative leave pending an investigation, which is standard protocol in any officer-involved shooting, Buell said. 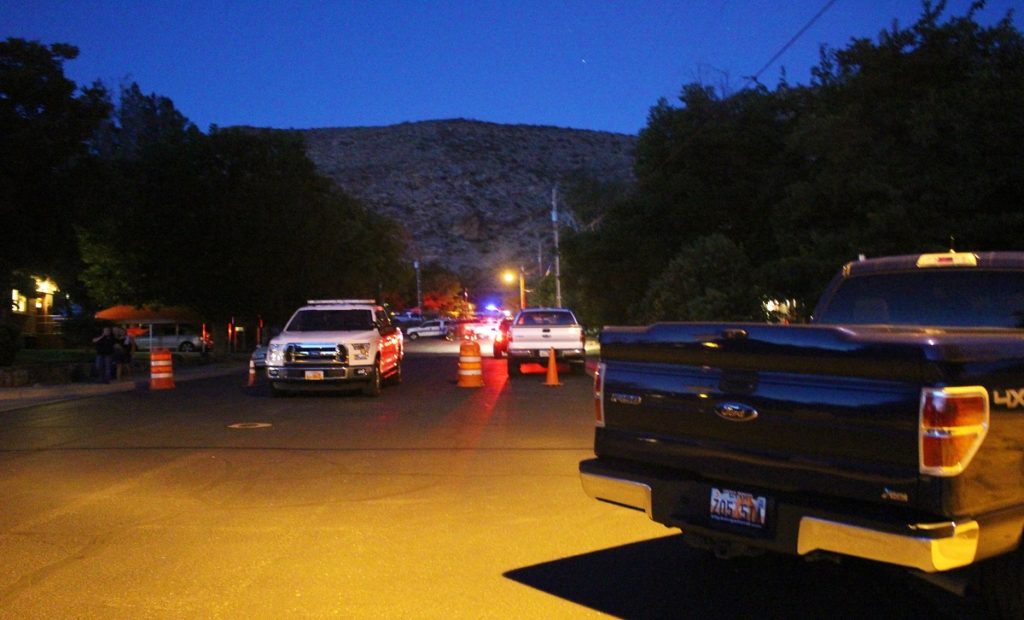 An entire block in the area of 70 North and 60 East is cordoned off after a police pursuit ends with shots fired. The Washington County Critical Incident Task Force will conduct an investigation, LaVerkin, Utah, July 6, 2016 | Photo by Cody Blowers, St. George News 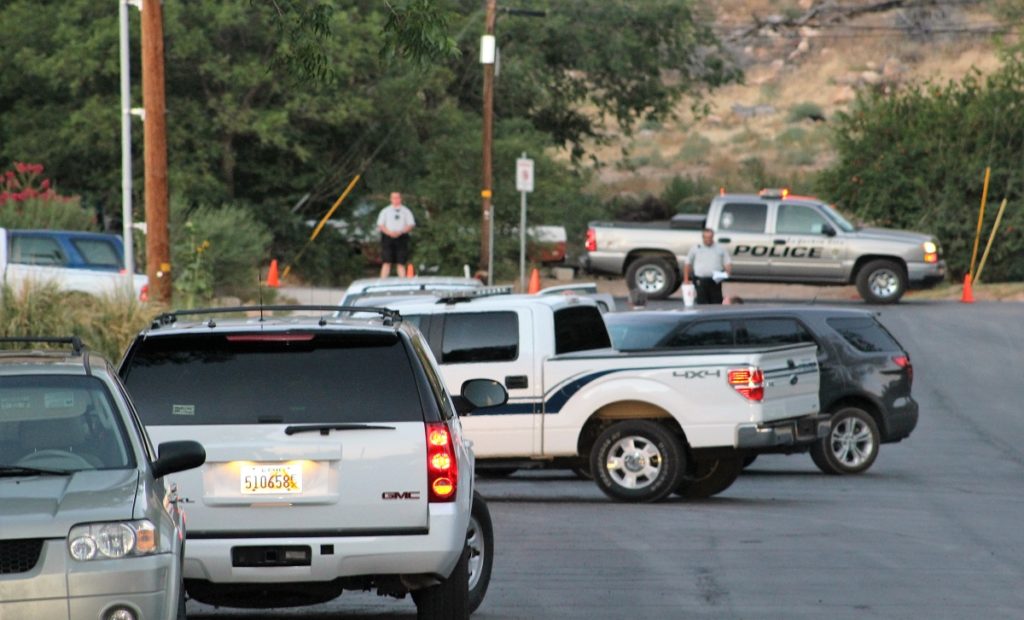 Officers from LaVerkin and Hurricane Police Departments are searching for a second subject believed to be involved in a stolen vehicle report that started in Hurricane and ended in LaVerkin, Utah, July 6, 2016 | Photo by Cody Blowers, St. George News 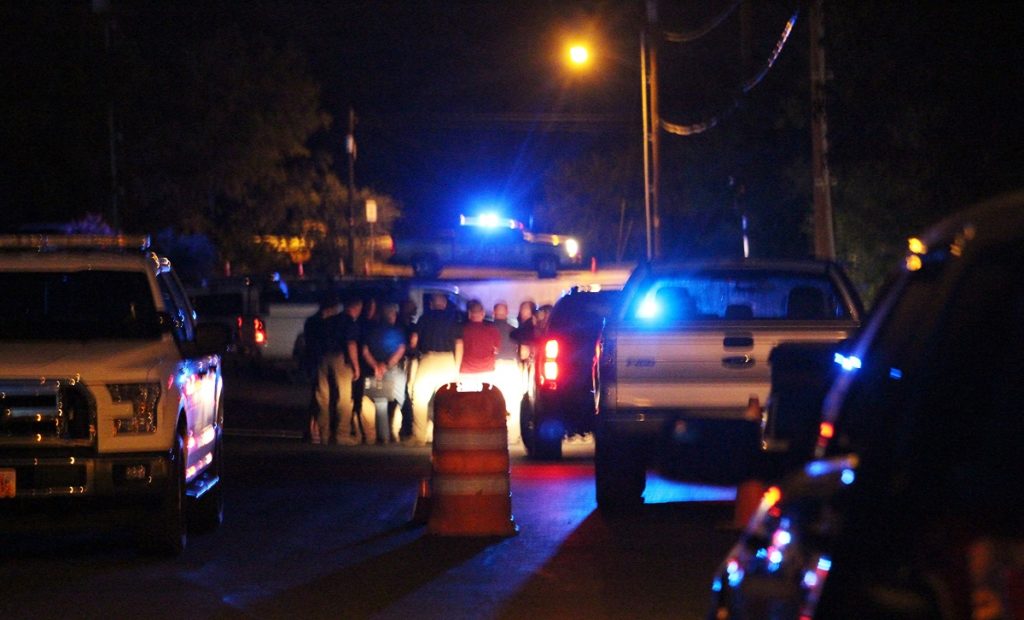 Over one dozen investigators and officers responded to the 70 North block of 60 East after shots were fired during a police pursuit in LaVerkin, Utah, July 6, 2016 | Photo by Cody Blowers, St. George News 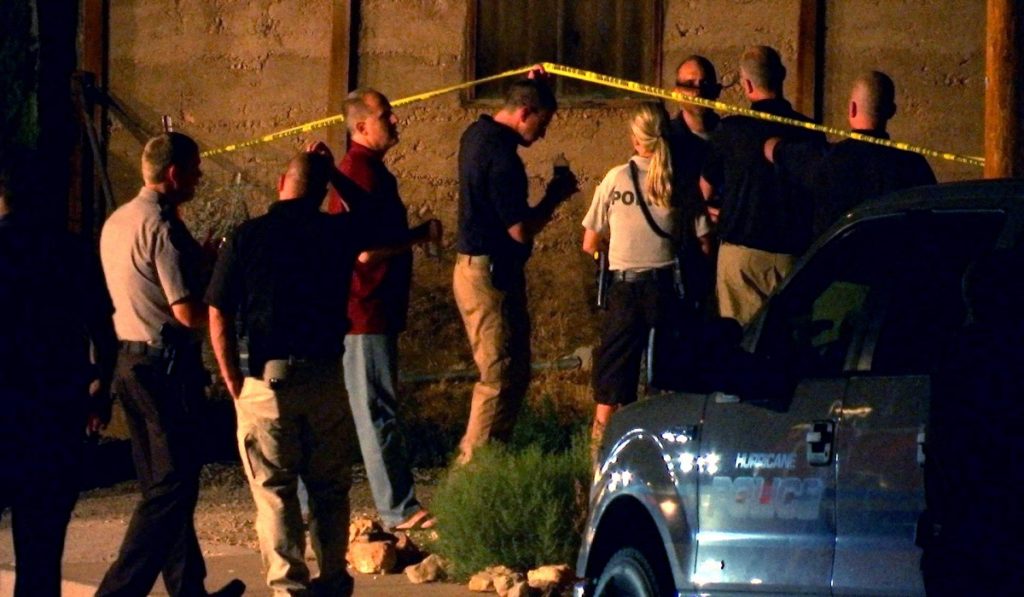 Over one dozen investigators and officers responded to the 70 North block of 60 East after shots were fired during a police pursuit in LaVerkin, Utah, July 6, 2016 | Photo by Michael Durrant, St. George News 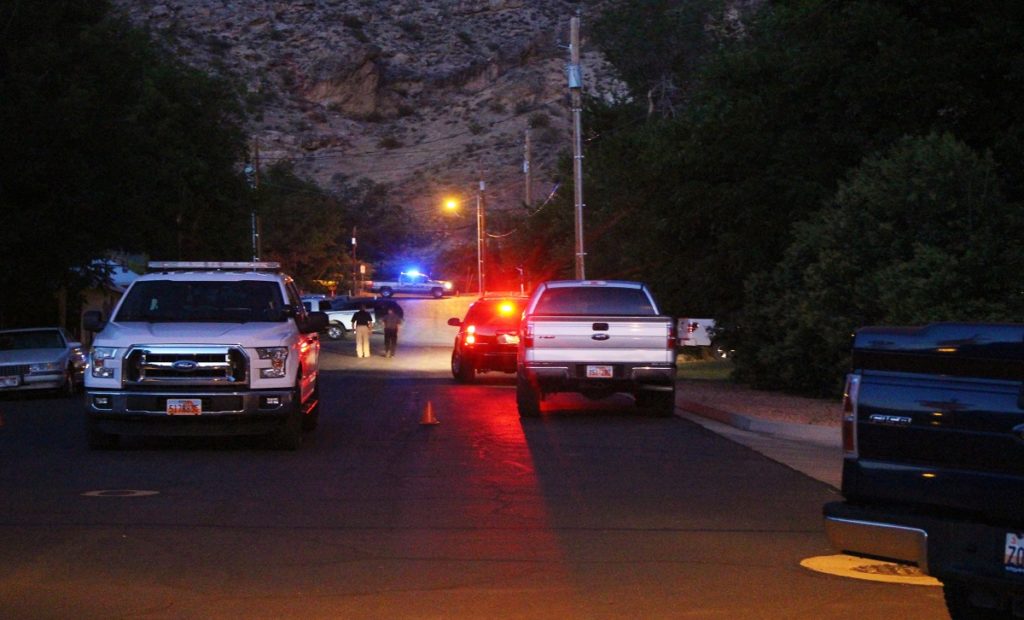 The Washington County Critical Incident Task Force will conduct an investigation into an incident where an officer discharged his weapon to stop a suspect who was driving a vehicle directly at him, LaVerkin, Utah, July 6, 2016 | Photo by Cody Blowers, St. George News 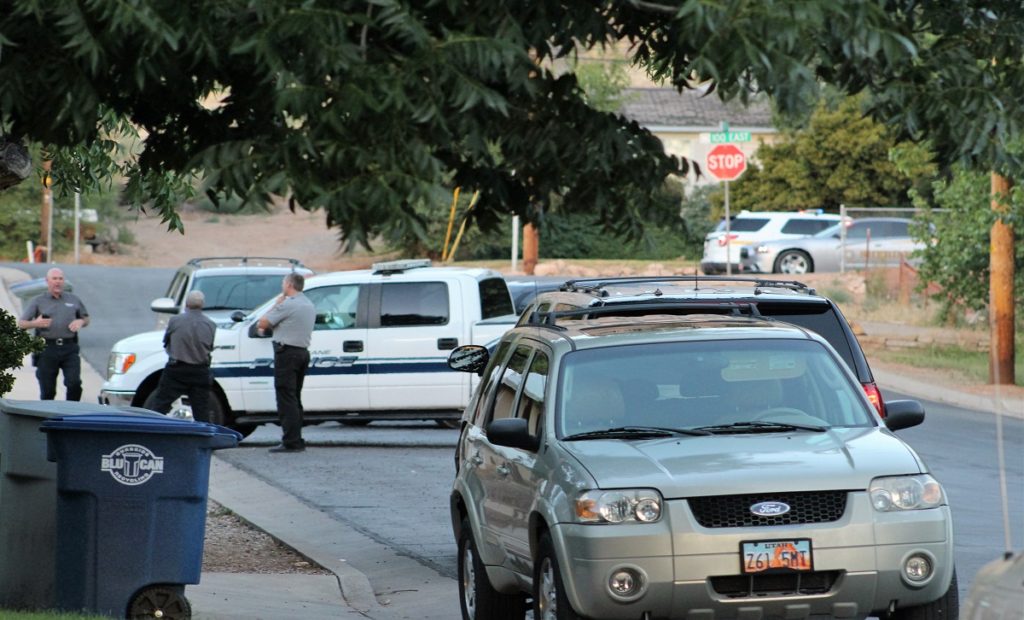 A man was arrested after a vehicle and foot pursuit with officers where shots were fired in the 70 North block of 60 East in LaVerkin, Utah, July 6, 2016 | Photo by Cody Blowers, St. George News 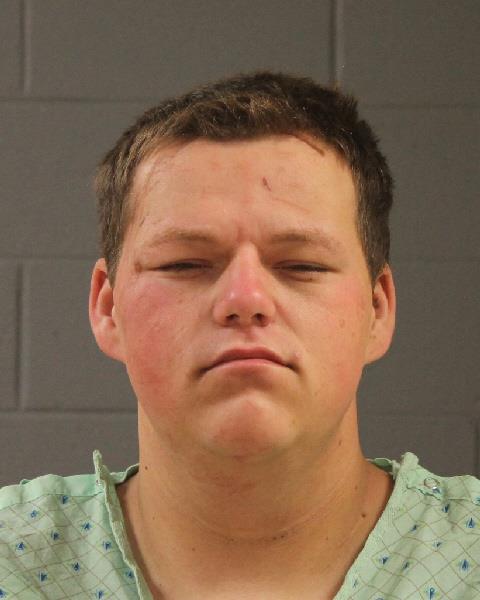