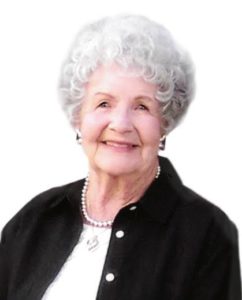 Manoma (Noma) Andrus Jenkins was born April 15, 1921, to Charles Andrus and Rose Turner Andrus in St. George, Utah.  She died peacefully in her home surrounded by family on July 2, 2016.  She was raised in St. George where she spent winters in town and summers on their farm in the Washington Fields.

Noma was blessed with a beautiful singing voice. At the age of 5 she sang a solo in the St. George Tabernacle.  She traveled to Salt Lake City at the age of 8 to sing in a contest to select the state song.  The song she sang, “Sego Lilly of the Valley” was chosen.  Singing was her talent when she was crowned “Days of ’47 Queen” in 1941.

During her reign as Queen she was hosted by the Mayor of Salt Lake, Ab Jenkins, and his wife Evelyn. They were so taken by her, Evelyn told their son, Marv, “I have met the girl I want you to marry.” Marv and Noma married 11 weeks later and lived in Salt Lake City where their daughter Judy was born. As a pilot for Western Airlines, Marv moved his family to California where their daughter Jeri, and their son’s Ab and Charlie were born.  They moved to Fort Worth, Texas, in 1956 where they lived for 26 years.  When Marv retired, they returned to St. George, where Marv built the home they lived in for 35 years.

Noma was a faithful member of The Church of Jesus Christ of Latter-day Saints where she continued using her vocal talents.  She was best known and loved as the Primary chorister where she served faithfully for many years.

She was a wonderful and gracious hostess.  Over the years countless people dined at her table.  Her apple pie was famous from coast to coast.   Most visitors to her home were greeted with a large slice. In the neighborhood she was known as the “Cookie Lady.”  The neighborhood children would ring her doorbell and she would give them her famous Butter Cookies.  It didn’t take long for the adults to catch on to the trick also.

She was a wonderful seamstress and regularly surprised her children with new clothing.  She introduced her 16 grandchildren to “magic eggs” and “dancing worms.”  She was an avid gardener and loved anything that bloomed, twined around a lattice or was showy.  She talked and sang to her plants daily.  In keeping with her Queenly personality, her hair and makeup were always perfect, and she adorned herself with beautiful jewelry even when walking to the mailbox.

Noma enriched the lives of many with her inviting smile, her warm laugh and sincere interest in everyone.  She was always happy and maintained a cheerful attitude.  Her common phrase of gratitude, which she spoke frequently, was “Thank you, Thank you, Thank you.”  She greeted friends and family with enthusiasm.  But her pride and joy was her family.  She was a grand lady, a loving and devoted wife, a wonderful mother and the greatest grandmother of them all.

She was preceded in death by a brother, three sisters, husband Marv, and great-granddaughter Amelia Hansen.