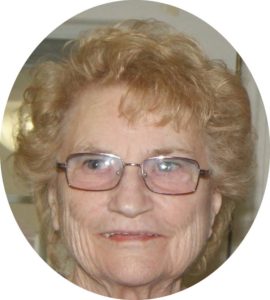 Joan Cox Hafen was born November 6, 1936, in Rockville, Utah to Julius and Genevieve Cox. She was the fifth of ten children.

Joan grew up in Rockville, spending much time in Zion’s National Park. As a teenager, she worked at Grandma’s Kitchen as a waitress, as well as babysitting the owner’s children. She also worked as a housekeeper at the North Rim of the Grand Canyon. She graduated from Hurricane High School in 1955.

She met Donald Weston Hafen and after only six weeks of courting, they were married in Joan’s parents living room on April 25, 1959. They were sealed for time and eternity in the St. George Utah Temple on September 29, 1960.

Joan spent her married life working side by side Donald, taking care of their family business- Hafen Nursery, driving trucks and hauling plants. This is where they taught their children the important value of hard work.

Her life could be summed up on one word- service. She spent her life in service to family, friends, and church. She gave endless service to her children, especially to her handicapped daughter, Donita, working tirelessly each day since Donita was born to make sure she had every need attended to.

Joan was a faithful member of The Church of Jesus Christ of Latter- Day Saints. She accepted and magnified every calling extended to her.

Her hobbies included hand sewing, quilting, playing the piano, playing bells in the bell choir, and spending time with her family.

She was a colon cancer survivor, but due to the many years of the effects of it and subsequent surgeries, she passed into eternity on Wednesday, June 22, 2016, in Las Vegas, Nevada.

Our Family would like to thank the doctors and nurses at Valley Hospital for the compassionate service given to our mom.