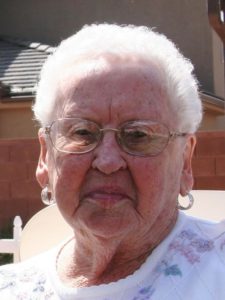 After graduation from Drummond High School, Shirley worked at the Dingwall Ranch until she moved to Hill Field Air Force Base in Ogden, Utah, during World War II. She served there for two years before being transferred to the Pentagon in Washington D.C. In 1946 at the end of the war, Shirley moved to Oakland, California. This is where she met and married a handsome Army Sergeant, Elwood Royce Kitchen, who had just returned from Europe after serving five years in the United States Army.

Shirley was a homemaker and brought another son and three daughters into the world. She remained active as a member of The Church of Jesus Christ of Latter-Day Saints. Once her children were older, Shirley began working for Los Angeles County at Olive View Hospital in Sylmar, California. She earned her vocational nursing license while there. During 1971, the earthquake destroyed this hospital while she was on duty. For the next 11 years Shirley worked at Sierra Memorial Hospital in ICU located in Sun Valley, California. During that time she received the “Outstanding Nurse of the Year” award.

At retirement, Shirley and Elwood sold and moved to Lake Nacimiento, on the central coast of California. She enjoyed living on the lake so very much. After 10 years of retirement, the two of them decided to move and settle for their remaining time in beautiful St. George, Utah. This is where Shirley became very active in her genealogy work and attended the St. George LDS Temple regularly.

Shirley will be greatly missed by all who knew and loved her.