CEDAR CITY — This chair has a powerful history. And were it not for the efforts of a young Utah craftsman and aspiring politician himself, it might have been lost to those still around to appreciate everything its original occupant had not only witnessed but played a part in.

The United States Senate can take its toll on a person. After a long career of intense debate, close votes and history-making compromise, one can expect to emerge with more than a few proverbial scratches, bumps and bruises. But for the valued chair of Utah Sen. Wallace F. Bennett, a 35-hour ride in a moving truck from Washington, D.C., to St. George proved to be its undoing.

The chair seemed invincible, sitting through 47 years in Washington, 24 of which were on the floor of the Senate — with its occupant witnessing the passage of the Civil Rights Act, the Voting Rights Act, the creation of Medicare and Medicaid, Nixon’s resignation and the Vietnam War — and then an additional 23 years settled in the study of Bennett’s grandson and political lobbyist Douglas Bennett.

However, upon its arrival in St. George when Doug Bennett moved to Southern Utah in 2014, the chair was in shambles. The wooden legs were beat up, one arm was completely broken, the base had caved in, the leather was scratched and the finish worn down. The moving truck had not been forgiving.

But this would not be the end of the story.

The senator and his chair

Sen. Wallace Bennett, a Republican, was elected in 1950 and served Utah for four subsequent terms. While in office, he focused on water and land issues. He sat on the Finance and Banking committees — eventually as the ranking member — and the Senate Select Committee on Atomic Energy, and he was the vice chair of the Senate Ethics Committee.

Doug Bennett describes his grandfather as a “remarkably humble and gracious man … deeply ethical and honest with a wonderful sense of humor.”

Tom Korologos, former U.S. Ambassador to Belgium, worked as a staff member for Wallace Bennett from 1962 to 1971, the last five of those years as his chief of staff. Korologos described the Senate chamber as being “tradition bound from top to bottom.”

The chamber is split in half by an aisle — the Democrats on one side and the Republicans on the other. The more senior the senator, the closer to the front and center is his or her chair. The Majority Leader sits in the front row seat closest to the aisle, and the Minority Leader sits across the aisle. This is where the famous political term “working across the aisle” comes from.

“Sen. Bennett was very senior, so as I recall, he sat in the third chair over from the aisle,” Korologos said. “The chairs themselves are on wheels … and usually follow the senator as he moves closer to the front. Senators can buy their chair when they leave, so the chairs are rotated out frequently.”

Korologos said that as the ranking member on the Finance Committee, whenever economic bills were up on the floor, Bennett sat in that chair to manage the bill. His top aide would sit next to him and be his assistant.

“He would give the speech and I would take notes,” Korologos said, “and whenever the Senator was questioned on something, he would turn to me for the answer. These were pre-Google days, so I had to have all that data at my disposal in case someone asked a question.”

Doug Bennett spent several of his childhood summers with his grandfather in Washington and said the senator loved to walk. In fact, as Doug recalls, his grandfather walked every day to the Dirksen Senate Office Building — approximately 6 miles from his apartment.

“When I stayed with him, he would wake me up at five in the morning and say, ‘Come on, Doug. Let’s get going. We’ve got to get to the office,’” Doug Bennett said. “I’d make it to Dupont Circle and say ‘Grandpa, we’ve got to call a cab!’ I was 14 years old, and I was exhausted trying to keep up with him.”

Doug Bennett said those summers and many other moments working with his grandfather inspired him to get involved in politics.

“It opened up a whole new world to me,” he said. “I couldn’t wait to get back to Washington because it was so compelling. It was so dramatic … It’s where people were making decisions that affected the whole world, and I very much wanted to be a part of that.”

When Doug Bennett went to Washington to start his career in 1989 as counsel to the House of Representatives Committee on Energy and Commerce, most of the people who served with his grandfather were gone. However, one day at a reception in the Capitol, he was introduced to then-Sen. Joe Biden.

“Sen. Biden asked if I was related to Wallace Bennett, and I said that I was,” he said.

Biden told Bennett he was always welcome in his office and then continued to tell Bennett a story of his early days in the Senate.

(Biden told me), ‘When I was first elected, before I was sworn in, my wife and daughter were killed in an automobile accident. My whole world crumbled, and I was only 29 years old. But one day, I got a letter from a man I’d never met, and the letter said, “You don’t know me, but you have just experienced a tremendous loss and you’re about to begin a very difficult career, so if there’s ever anything I can do to help, I will.”‘

“Well,” Doug Bennett said, with the emotion evident in his voice, “that letter was from Grandpa. Across the aisle, across the country, across the ideological lines of left and right … I think with a little bit more of that, the place [Congress] would work better.”

Back in St. George

Wallace Bennett died in 1993, and Doug Bennett said he got his grandfather’s chair by “wrestling it away from my little brother.” He offered it to his uncle — Wallace Bennett’s son, Utah Sen. Bob Bennett — but his uncle said he wanted to keep his own Senate chair, which he eventually did.

So the chair stayed at Doug Bennett’s home in Washington, D.C., until he moved to St. George in 2014.

“I always like to keep it nearby,” he said, “because every time I look at it, it reminds me of him (Wallace Bennett), and I like being reminded of him.”

Doug Bennett began teaching political science classes at Southern Utah University in the spring of 2014, and shortly thereafter, he learned that Clay Crozier, one of his political science students from Roosevelt, Utah, had experience in building and refurbishing furniture.

Crozier said he took a cabinetry class in high school and fell in love with cabinetry and furniture design, taking his furniture designs throughout the state to compete in fairs and always winning the top prize.

Crozier did a few other furniture projects after high school but hardly anything once he arrived at Southern Utah University.

“We were in Professor Bennett’s American National Government class one day,” he said, “and it came up that I make wood furniture.”

Bennett immediately asked Crozier to get in touch with him about a possible project of fixing up the chair.

Bennett told Crozier this was a “side job” and not tied to his academic performance in his class.

“He had the chair for a couple of months,” Bennett continued, “and when he brought it back, Mary (Bennett’s wife) and I just said, ‘Wow, it’s better than new!’ He did a beautiful job. We know it’s at least 66 years old — and probably older — and Clay made it look like new.”

“He was dazzled with it,” Crozier said. “I didn’t know much about Sen. Wallace Bennett before I started working on the chair, and so Professor Bennett told me a little about the history behind it and how he and his grandpa were so close.”

Crozier said knowing it was the senator’s chair made it more of a “priceless item,” taking that into consideration as he was working on it.

“I made sure it was done really well,” he said.

Bennett said he thought using Crozier was the right decision.

“I thought about it, and said, ‘What would Grandpa do?’” he said, “and I think Grandpa would rather have it refinished and restored by a bright young man from Utah than a random furniture shop.”

The chair now sits in Bennett’s fourth floor office, where students visit him regularly to joke around, talk about the political news of the day and get career advice. It continues to remind Doug Bennett of the humble, funny and generous man he walked to the U.S. Capitol with during his teenage summers.

Inspired by his favorite professor, Crozier is attending law school this fall and eventually plans to get involved in politics. He is currently spending the summer in Washington — his first time in the nation’s capital — as an intern in the U.S. Senate for Sen. Mike Lee. However, this time his work for a senator will involve policy, not furniture polish. 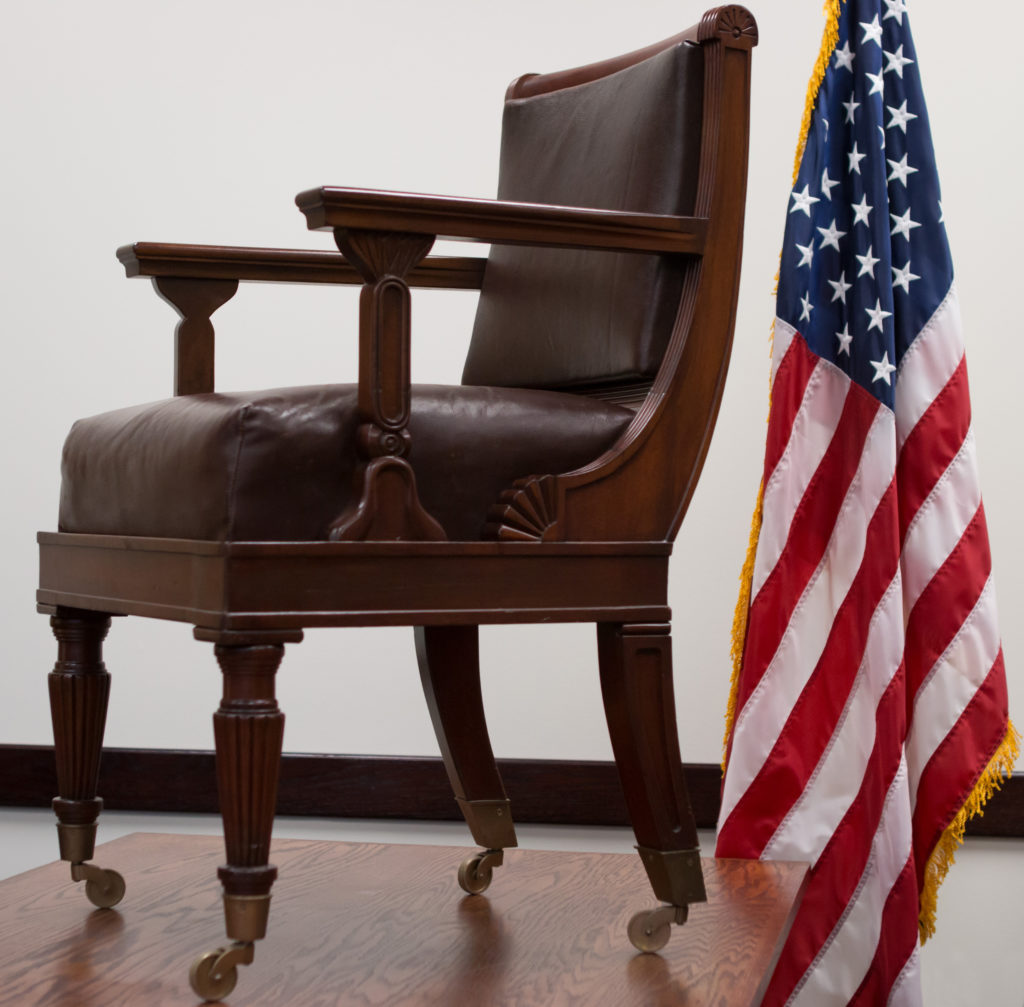 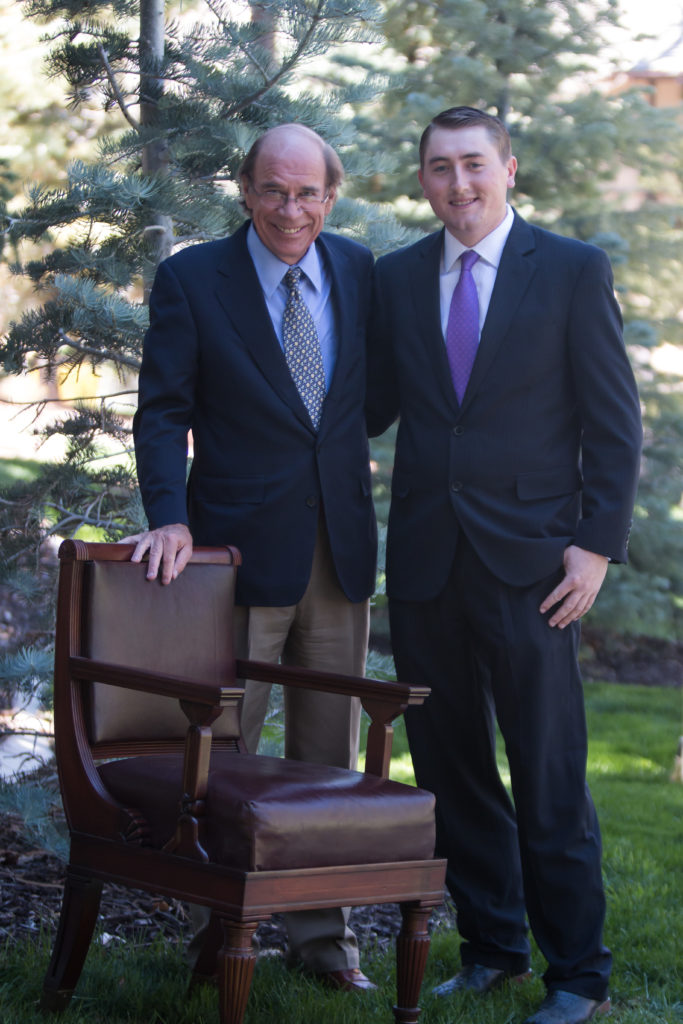 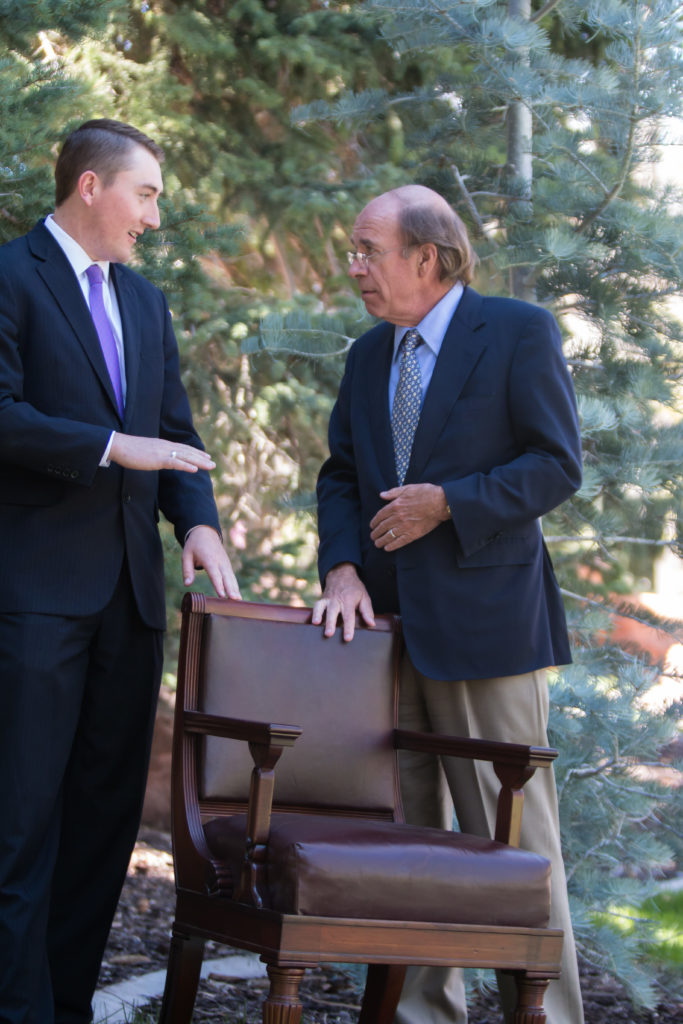