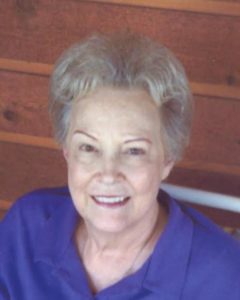 Carol Peterson Felt, 78, passed away June 13, 2016. She was born March 24, 1938, to Lee and Grace Peterson. She grew up in Rexburg, Idaho and graduated from Madison High School in 1956. She attended Ricks College.  Carol taught 4th grade in Rigby, Idaho for three years. In September 1961, she went to Utah State and graduated with a degree in Education.

Carol married Gene Felt on December 23, 1961, in Rexburg, Idaho. They were later solemnized in the Idaho Falls LDS Temple. In July 1962, Carol and Gene moved to Sheridan, Wyoming where Carol taught 4th grade for three years.

They moved to Cheyenne, Rock Springs and Worland, Wyoming. In Worland, she was Chapter One Remedial Reading and Math Coordinator for 13 years. She attended BYU in 1985 and received a Master’s Degree in Special Education. She taught special education at the High School for three years.

Carol retired in 1990 and moved to Star Valley Ranch, Wyoming. She went to Goodyear, Arizona for the winter and Star Valley Ranch in the summer for many years. In 2006 she had a kidney transplant in Salt Lake City. They spent the winters in Ivins, Utah and summers in Star Valley. In 2014 they moved to Ivins full time.

She enjoyed traveling and reading. She was an active member of The Church of Jesus Christ of Latter-day Saints serving as Relief Society President twice.