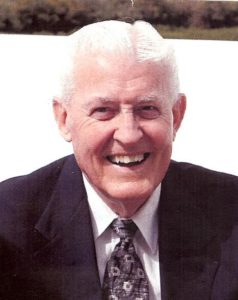 The family lived in Oregon but later moved to Boise, Idaho. Woody graduated from Boise High School then served in the Army Air Corps from 1944-1947 as a navigator, on B-17’s and B-29’s out in the Pacific. After the war, Woody returned home and attended Boise Junior College. He left after a year of college to serve as a missionary for The Church of Jesus Christ of Latter-day Saints in Norway.

Returning home from Norway 2 ½ years later, he married the love of his life, Donna Marie Hatch, in the Salt Lake LDS Temple on Sept. 14, 1951. He graduated from University of Utah in Accounting and had a career as a CPA for Ernst and Ernst, then later in his own private practice. Most of his career, he lived and worked in Southern California. He enjoyed golfing, swimming, racquetball and flying a small plane. He loved flying with the Flying Sams (Samaritans) taking doctors and nurses down to Mexico for free medical clinics.

He loved to serve others and enjoyed many church callings, serving as a Seminary teacher, Bishop and Stake Patriarch.

Donna, his wife of almost fifty years, passed away in 2001. They served as LDS senior missionaries in Norway from 1996-1997. In 2007, Woody married Gerd Weiberg, whose parents and sisters he baptized as a missionary in Norway. They traveled, enjoyed family gatherings and have many dear friends.

He is preceded in death by his wife, Donna; grandson Garrett; his parents; and sister, Doris Thornton.  He is dearly loved and will be greatly missed.