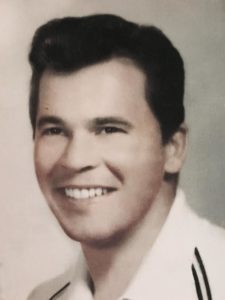 James Everette Gunter, age 78, of Hurricane, Utah, passed away Sunday May 29, 2016. He was born February 23, 1938, in Pace, Mississippi to Robert George Gunter and Mary Belle Alexander Gunter. He married Elaine Phyllis Williams Guerue on October 7, 1964, in St. George, Utah.  They were later sealed for Time and all Eternity in the St. George Temple.  They later divorced in 1992.

“Jimmy” Gunter was raised in Las Vegas since he was 2 years old. He loved growing up in Vegas with his older brothers and his life-long friends. He raised his family in the mountains outside of Las Vegas, Nevada and later in Hurricane, Utah. He enjoyed the outdoors and all of its many activities, especially fishing! He also loved traveling and he took numerous vacations, almost yearly, to the west coast with the family. He was hard working and had unconditional love and loyalty to everyone.

He was a member of the Teamsters Union of Nevada and drove for Nevada Ready Mix for over 20 years until his retirement in 1993. After retiring he enjoyed gardening, fishing, and caring for his dogs, and his many children and grandchildren became his hobbies and source of great happiness.

He was preceded in death by his parents listed above; 2 older brothers, Buck Gunter and Bob Gunter; and his son, Robert Gunter.