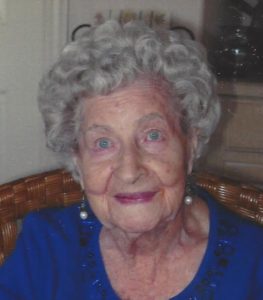 Our beloved and loving mother, Stella Victoria Henderson, age 99, passed away Monday, May 23, in St. George, Utah. She was born Feb. 4, 1917, in Oglesby, Illinois, to Stanley and Josephine Rosalek Feliksiak.

Stella was raised in Moline, Illinois, where she married Emil George Blomgren on June 27, 1936. They were married for 40 years. In 1947, they moved to Salt Lake City, Utah. Stella was active with the ladies group at Sacred Heart Catholic church and worked for ModeOday in Salt Lake City.  They moved to San Rafael, California, and then to Phoenix, Arizona, where she worked for Montgomery Wards and Dillard’s department stores. Emil passed away at age 64 on July 28, 1976.

Stella enjoyed bowling and loved to go dancing, which is where she met Charles Henderson who became her dance partner, and they married on Sept. 1, 1989.