FEATURE — A thousand and more veterans, including some from Southern Utah, have begun a pilgrimage Wednesday, riding over 5,200 miles across America to Washington, D.C., to honor servicemen and servicewomen who died and who never made it home and to find fellowship and healing in one another’s company.

The annual “Run for the Wall” is in its 28th year. Veterans will depart from Ontario, California, 15 minutes apart in three groups for three separate routes beginning at 7:35 a.m. PDT.

More veterans will join the companies along the way such that by the time they reach District of Columbia in 10 days their number will have more than doubled.

“At the end there are approximately 900 motorcyclists in each route,” said Doug Hunt, second vice president of Chapter 961 of the Vietnam Veterans of America in Southern Utah.

One of Run for the Wall’s hallmarks is its missing man formation. As in its longstanding aerial counterpart, the formation travels with an open space representing the missing man – whether still missing in action, killed in action or prisoner of war unaccounted for. They are escorted from the front and guarded at the rear.

“It gives many veterans the chance to ride for someone that’s not here anymore,” Hunt said, “and in some way, to honor them for the sacrifice that led to their absence.”

Many will carry names in their pockets representing the missing, names they will carry thousands of miles to the memorial wall in the hope those represented will be noticed and perhaps even found.

“Everybody that makes this ride literally has a pocket full of names of those who can’t make it,” said Washington City resident Jerry Shields, a retired Marine staff sergeant who served in Vietnam from 1973 to 1975.

The annual expedition remembers not only American military personnel who have been killed in action but the 83,000 still missing since World War II. Its mission is simple:

To promote healing among ALL veterans and their families and friends, to call for an accounting of all Prisoners of War and those Missing in Action (POW/MIA), to honor the memory of those Killed in Action (KIA) from all wars, and to support our military personnel all over the world.

What happens in the space of those 10 days is what makes these veterans return year after year, Hunt said. He drives the Vietnam Veterans of America merchandise trailer along Run for the Wall’s central route to D.C. and has done so for the past nine years.

The veterans trailer itself also carries the message: “We ride for those who can’t.”

Moving thousands of bikes through towns and cities across the country, through gas stations, stores and restaurants for that matter, takes a lot of organization. But veterans with their logistical and operational military experience are equipped to organize. Each group has teams – teams for fuel, ambassadors, chaplain, medical, hydration and others specific to the needs of the ride – and preparations have been made months in advance.

The routes for the run include a central, midway and southern route. Southern Utah’s VVA Chapter 961 participants will ride with the central group.

During their journey, the groups will make many stops. They will visit memorials, veterans hospitals, elementary schools and enjoy parades, Shields said. There will be “Welcome Home” receptions, police escorts and countless meals provided by many organizations in host cities.

On May 28, Run for the Wall will arrive at Arlington National Cemetery to attend a wreath laying ceremony at the Tomb of the Unknown Soldier, formally known as the Tomb of the Unknowns. It’s dedicated to American service members who have died without their remains being identified. Sentinels guard the tomb 24 hours a day, 365 days a year, changing the guard ceremoniously every half-hour or hour, depending upon the time of year.

A few veterans will be chosen to represent the Run for the Wall Group at the Tomb. The guard will begin the ceremony and escort them down into the tomb to present their memorial wreath.

Veterans will then convene at the Vietnam Veterans Memorial, a wall engraved with more than 58,000 who lost their lives in the Vietnam conflict. There they will lay their plaque and there, in keeping with the plaque’s message, the Run for the Wall XXVIII will be “Mission Accomplished.” 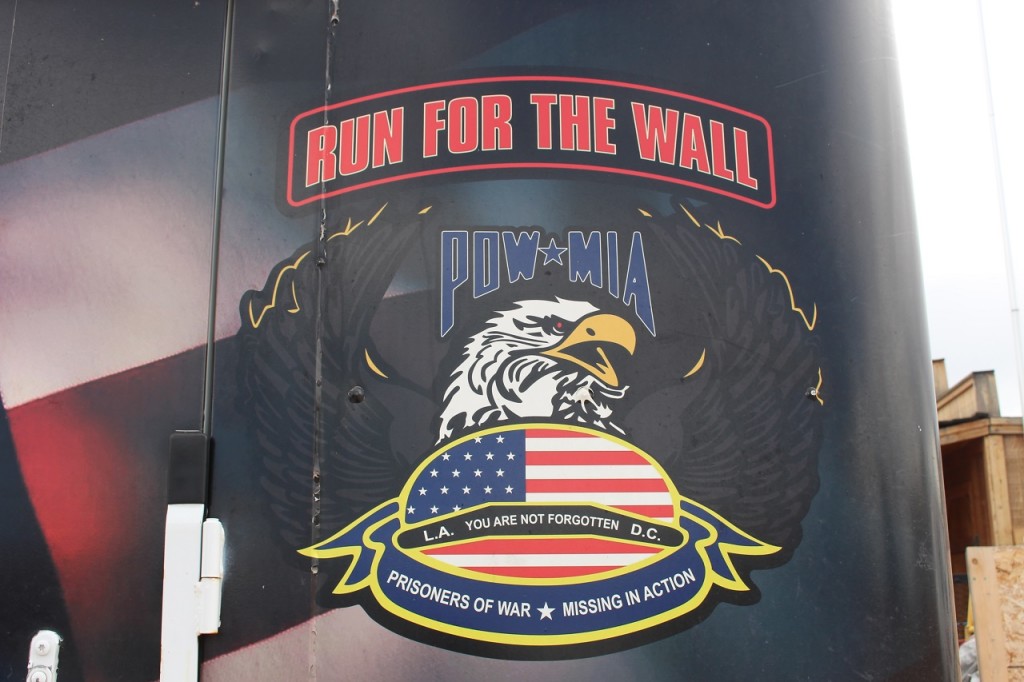 Message on the merchandise trailer headed for Washington D.C. in the Run for the Wall, Washington, Utah, May 12, 2016 | Photo by Cody Blowers, St. George News 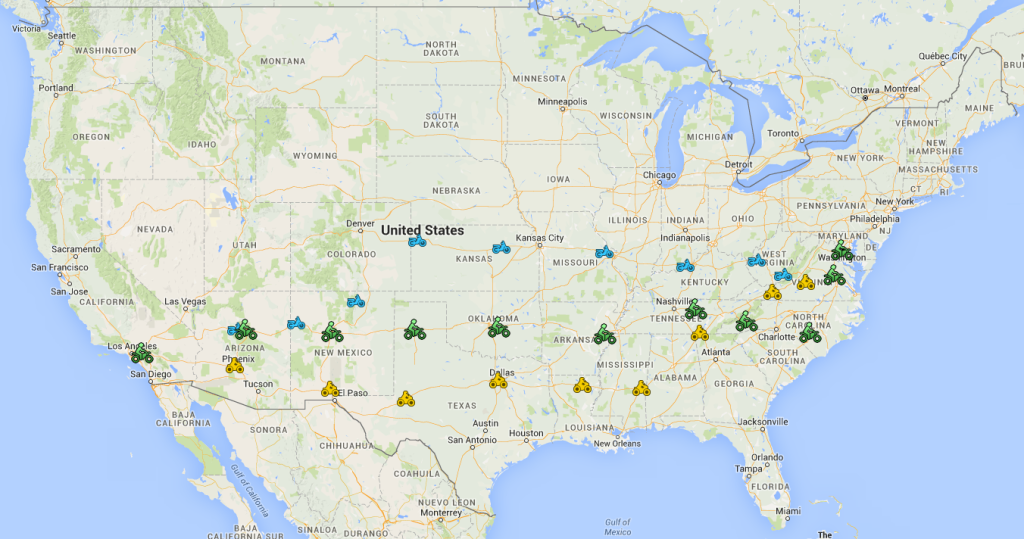 More than a thousand veterans will participate in the "Run for the Wall" motorcycle ride from Ontario, California, to the District of Columbia May 18-27. The 28th annual run is "kickstands up" Wednesday, with riders falling into three different groups for a central, midway and southern route, designated by three colors of motorcycle icons on the map, to the finish at the Vietnam Veterans Memorial. There the veterans will place a "Mission Accomplished" plaque at the apex of the memorial. | Map courtesy of Google Maps via RFTW.org; St. George News 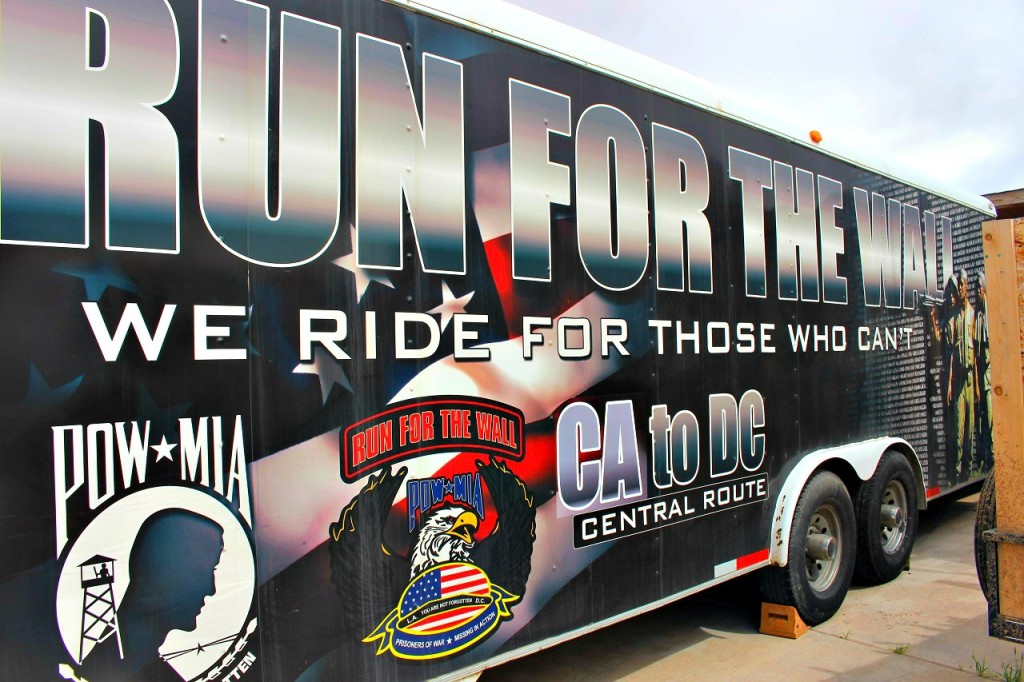 The Vietnam Veterans of America Chapter 961 of Southern Utah takes this merchandise trailer on the "Run for the Wall" from California to Washington, D.C. Doug Hunt, second vice president of the local chapter, has driven the trailer nine years on the annual run. Washington City, Utah, May 7, 2016 | Photo by Cody Blowers, St. George News 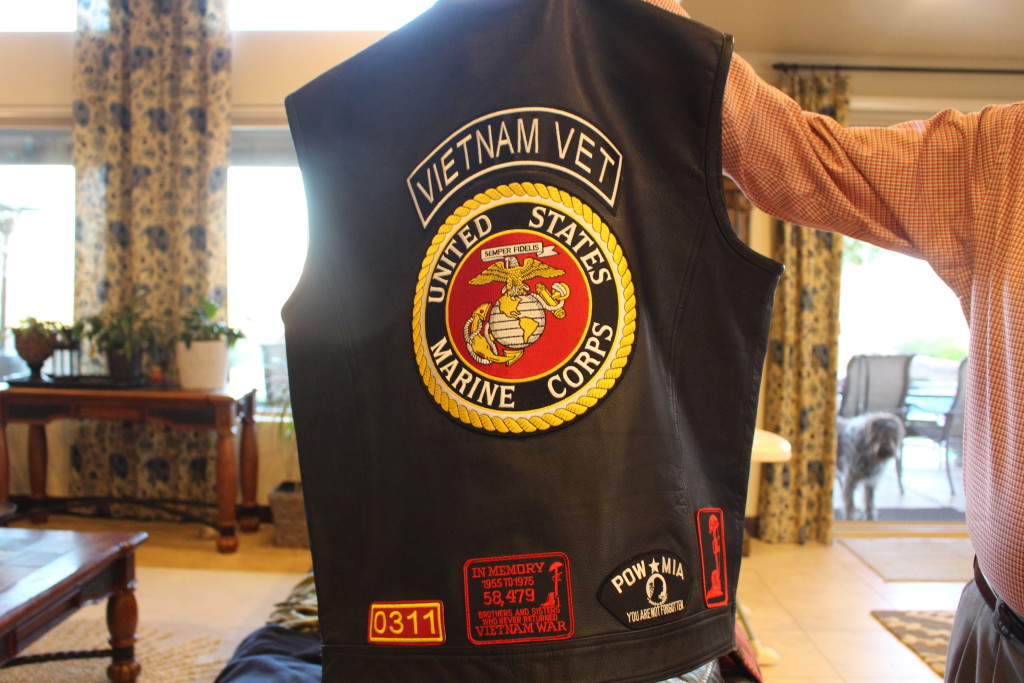 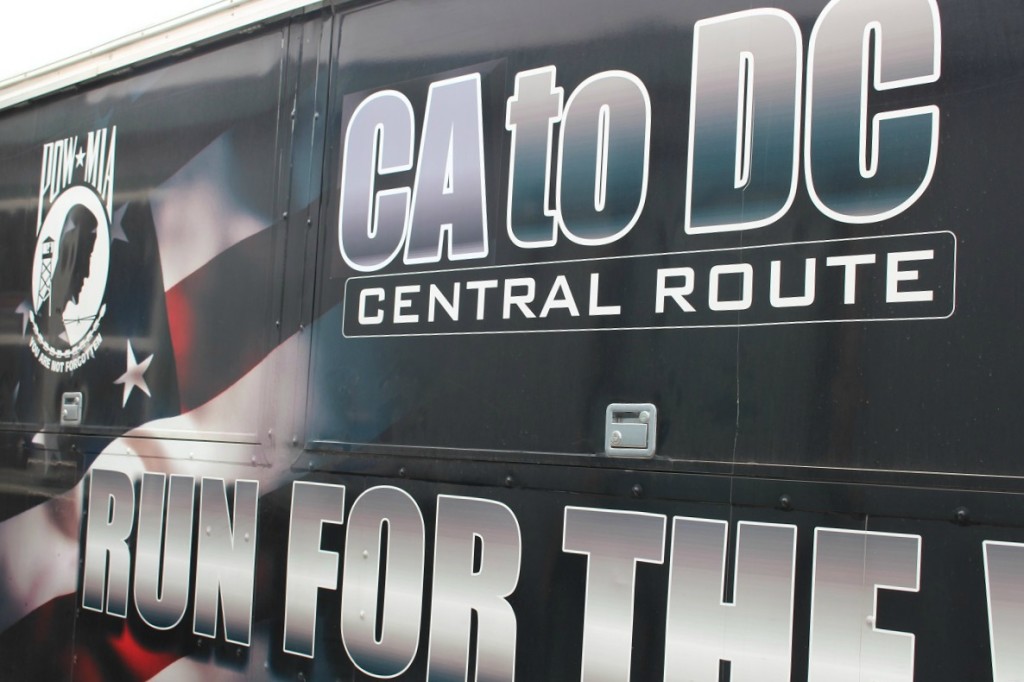 The Vietnam Veterans of America merchandise trailer being driven to Washington D.C. on the central route of "Run for the Wall" from California to the District of Columbia. Washington City, Utah, May 7, 2016 | Photo by Cody Blowers, St. George News 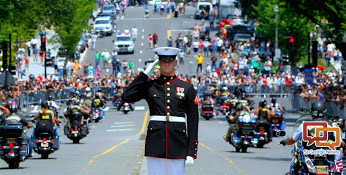 This 2013 photo is given for illustration purposes. It shows a Marine salute during a Rolling Thunder ride of veterans in Washington D.C., May 27, 2013 | Public domain photo, St. George News 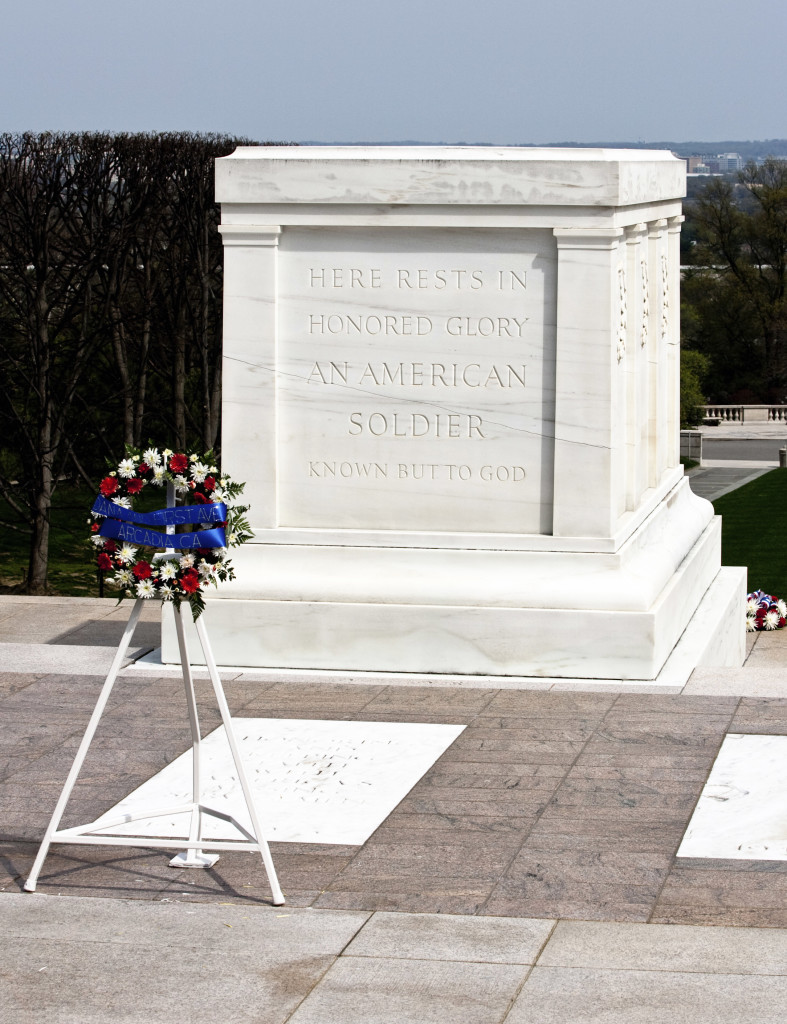 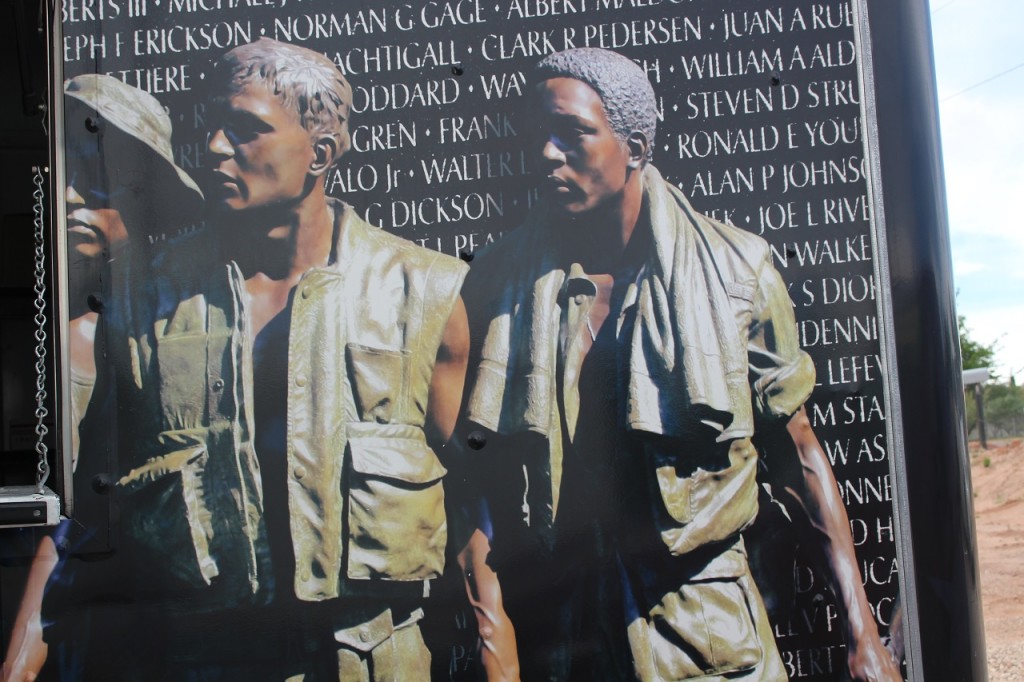 "The Three Soldiers" statue from the Vietnam Veterans Memorial in Washington, D.C., is depicted on the merchandise trailer the Vietnam Veterans of America, Chapter 961 in Southern Utah, takes with it on the "Run for the Wall" from California to the District of Columbia. Washington City, Utah, May 7, 2016 | Photo by Cody Blowers, St. George News

Vets overflow the hall at the Vietnam Veterans Recognition Day