Say what? Region 9, the banner carrier for 3A baseball for years now, took some lumps Saturday, finishing the day with a collective 5-3 record. Region champ Pine View got a sweep at home, but Desert Hills, the second seed, Dixie, the third seed and Cedar, the fourth seed, all dropped gut-wrenching losses in Saturday’s second round after capturing opening round victories.

So, while the Panthers are sitting pretty in the winner’s bracket, the other three squads will have to navigate the seemingly alligator-infested waters of the elimination bracket. In other words, one more loss for DH, Dixie and Cedar, will end their respective seasons. 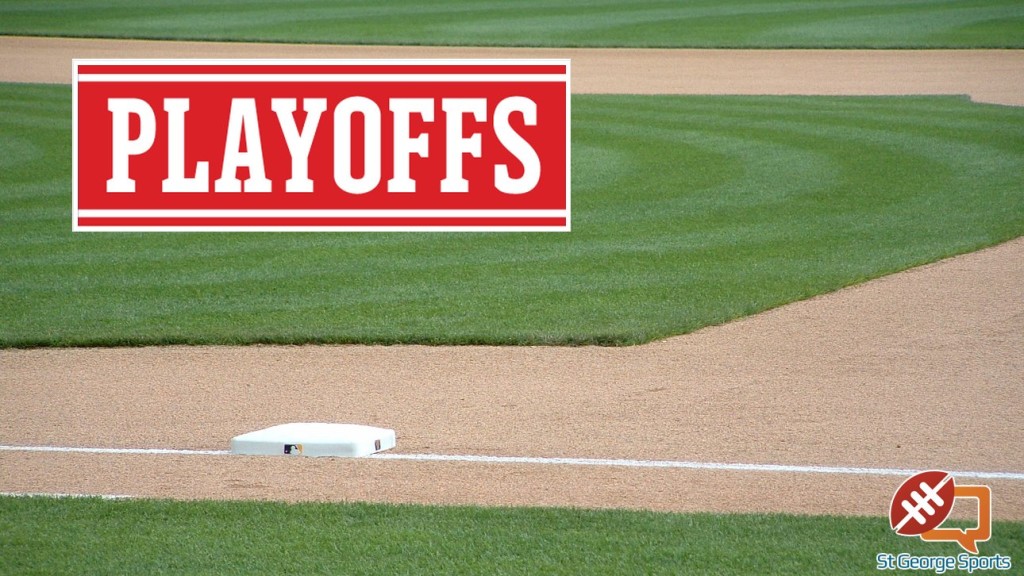 It was, in fact, Region 12 that seized the day Saturday, going a combined 7-1. Richfield may be the biggest Cinderella of the tournament. The Wildcats, seeded fourth from Region 12 and entering the tourney with just an 11-10 record, stunned Region 10 champ Stansbury 6-5, then knocked Dixie to the loser’s bracket with a 4-3 extra-inning win.

The biggest loser on the day was Region 10, with champ Stansbury losing two at home to get eliminated and No. 2 and No. 4 Park City and Union also heading home for the season with two losses. Only third-seed Grantsville kept its season alive, surviving an elimination game against Morgan. All-totaled, Region 10 was just 1-7 in the first two rounds.

Region 11 didn’t fare much better, with all four region teams losing their first-round games. Region champ Juan Diego got blistered at home 13-7 by Cedar. No. 2 Bear River lost a close one to Dixie, 2-1. But both Logan and Morgan got 10-runned in the first round, with the Grizzlies losing 16-2 to Desert Hills and the Trojans falling 12-2 to Pine View. Region 11 did rebound in the second round and ended up a combined 3-5, with only Morgan being eliminated.

But with many around the state expecting Region 9 to dominate, Saturday’s results were surprising.

“I’m a little bit shocked, to tell you the truth,” Pine View coach Troy Wall said after hearing of the three Region 9 losses. “That’s why you play the games, I guess. You’ve got to show up. You can’t take any game for granted, especially this late in the year.”

So the playoffs set up in an interesting way next Thursday. Pine View will battle Carbon in the first semifinal at 11 a.m. at Gates Field at Kearns High School and Canyon View will battle region-mate Richfield at 1:30 p.m.

Meanwhile, Dixie will battle Grantsville in an elimination game at 11 a.m. Thursday at Granger High and Desert Hills will square off with Juan Diego at the same time at Taylorsville. If the two Region 9 teams win, they will face each other in a loser-out game at 4:30 p.m. at Gates Field.

Cedar is in the lower elimination bracket and could face one of those two teams Friday evening. The bottom line: only one of the three could possibly survive to championship Saturday.

The Panthers weren’t swinging the bats particularly well heading into the state tournament, but that all changed Saturday as Pine View scored 22 runs on 23 hits in just 11 innings with a pair of mercy-rule shortened games.

“I’m really happy,” Wall said. “We’ve been working constantly on going the opposite direction. We hit the ball well today. The only ball that was really pulled was (Dakota) Donovan’s home run, and when he hits it like that, that’s fine.”

Donovan had just about as good a day as a baseball player can have. He was 4 for 4 against Morgan, then pitched a no hitter against Juab and hit his first homer of the year.

“We’re hitting the ball better now and I’m excited to see how it’s going to be next week,” Donovan said.

“I try to keep my hitting and my pitching separated as much as I can so I don’t go out frustrated on the mound if I happen to strike out. I just happened to have a good day with both today. It was nice.”

Pine View actually trailed the Trojans 1-0 early and it was just a 3-2 Panther lead going into the bottom of the third. But PV scored seven runs over the next two innings to cruise to a big lead. Logan Lafemina’s sacrifice fly with no outs in the sixth made it 12-2 and ended the game early.

Jarod Stirling, who reached base four times in six plate appearances Saturday, is one of the unsung heroes for the Panthers.

“I like flying under the radar a little bit,” he said. “It makes it a lot easier to stay focused and not get as nervous. I love it.”

Stirling had a two-run triple in the win over Juab. His hit broke the scoreless tie in the second inning and he scored later in the inning as PV jumped out to a 3-0 lead. The Panthers added five more in the third with Jackson Bithell singling home a pair of teammates.

Donovan’s home run, which came with Connor Clark on base, disappeared deep into the desert beyond straightaway left field and provided the 10-run margin needed for the mercy rule. The only suspense left was whether Donovan would get the no hitter or not.

Juab’s Trent Rindlisbacher hit a hot shot down the first base line with two outs in the fifth that skipped under first baseman Brooks Barney’s glove. The play was initially ruled a hit, but changed to an error after review. Donovan then got Juab to ground out to end the game.

Lafemina, along with his three hits and four RBIs on the day, played some spectacular second base. He flipped one inning-ending ball behind his head to shortstop Tybo Johnston while Lafemina laid on the ground. The last out of the Juab game was another incredible effort by the senior as he ranged far to his right and then made a leaping throw to end the game.

Playing in Cedar City, the Thunder took batting practice in the first game, racking up seven runs in the first inning and eventually built a 16-0 lead before Logan finally got on the board in the fifth. Preston Creager and Chance Milne both homered in the runaway and Quinn Kiser had three RBIs.

DH added five more runs to the 7-0 start in the second and third innings, then built the 16-0 advantage with a four-spot in the fourth.

The Thunder carried the momentum into the first part of the Canyon View game, which started just minutes after the 16-2 blowout. Creager hit his second homer of the day as Desert Hills jumped out to a 3-0 lead in the third inning.

But the Falcons got their wings and cut it to 3-2 in the bottom of the third. With two men on, the Thunder committed an error to bring home the two scores and cut it to a one-run game.

Jackson Vasi, meanwhile, began to pick up the pace on the mound for the Falcons, throwing up zeroes on the linescore. Canyon View got a run in the fourth to tie the game, then exploded for four in the sixth to take a 7-3 lead, knocking Thunder starter Brayson Hurdsman out of the game.

Known for their pitching, the Flyers kept both games close. Tyson Fisher continued to dominate on the mound, with the sophomore shutting the Bears out until the seventh inning.

Dixie scored first on an RBI by Cade Christensen in the top of the fifth that brought home Payden Harrah. The Flyers were able to add what turned out to be a huge insurance run in the top of the sixth when Chance Vowell and Fisher socked back to back doubles.

Bear River scored one in the bottom of the sixth and got the tying run on base in the seventh, but Dixie was able to hold on for the win.

Down 1-0 early against the Wildcats, Dixie rallied for two in the bottom of the first and one in the second inning to take a lead that the Flyers would nurse most of the game. Fisher had a home run in the first and Hobbs Nyberg had an RBI in the second for Dixie.

The Flyers opened the bottom of the eighth with a pair of singles, but both runners were left stranded as the fourth-seeded Wildcats won their second game of the day.

The Flyers face the same daunting task as Desert Hills and Cedar now, having to win seven straight games next Thursday through Saturday to earn a state championship. Dixie opens the third-round play with an 11 a.m. game against Juan Diego at Taylorsville High School.

The Redmen stunned the No. 1-seeded Soaring Eagle by racking up 18 hits in the morning game. It was a shootout from the get-go, with Cedar snaring a 4-0 lead in the top of the second, then Juan Diego taking the lead back in the bottom of the inning with five runs, including a home run by Colbee Gagon.

Cedar got the lead back with four runs in the fourth, including a Treyson Esplin homer. At 10-7 in the sixth, Juan Diego left the bases loaded. The Redmen made them pay, pushing the lead to 13-7 behind the hot hitting of Kyler Carrizosa. He also pitched a complete game as the fourth-seeded Cedar got the upset win.

In the second round, Carbon had no offense in the first five innings. Cedar built a 3-0 lead behind an RBI triple by Carrizosa. But the Dinos, coming off a 14-inning marathon win over Park City, seemed the team of destiny when Cole Fossat hit a three-run homer in the bottom of the sixth to tie the game.

In the seventh, Cedar threatened but left men on base. On to the bottom of the inning, where Dallyn Moyer got an infield single, Chase Morgan got hit by a pitch and Taylon Abeyta loaded the bases with an infield single that caromed off the glove of diving shortstop Rykker Tom.

Trey Richardson then drew a walk with the bases loaded to end the game in unconventional fashion.

Cedar will compete in the one-loss bracket Thursday with a 1:30 p.m. game against Logan at Granger High School. If they win, the Redmen would face the winner of an elimination game between Juab and Bear River. 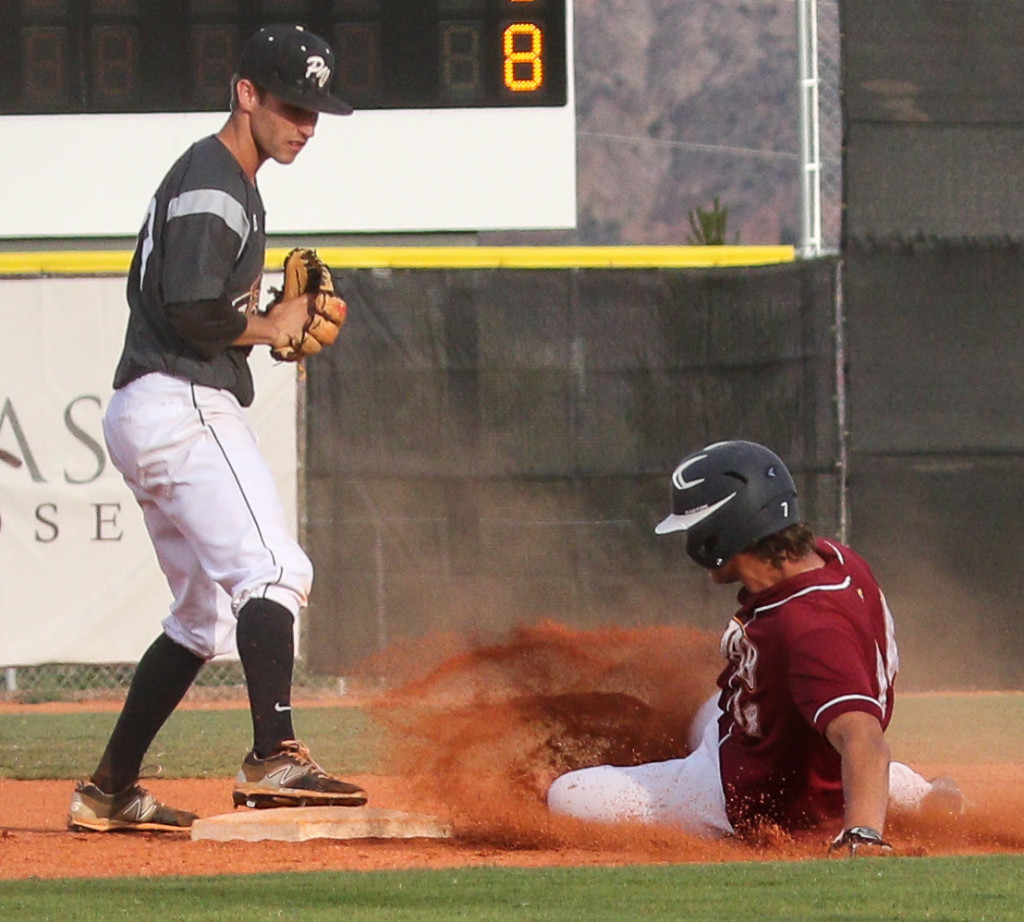 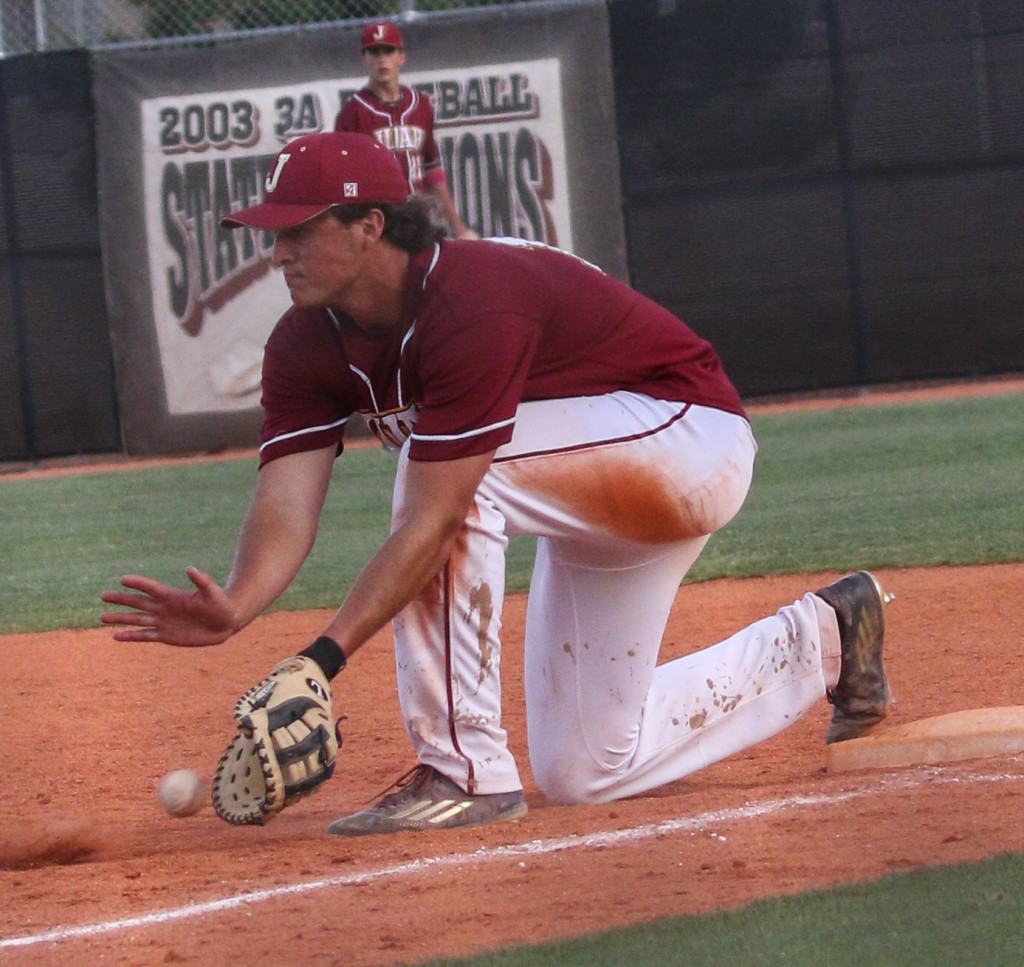 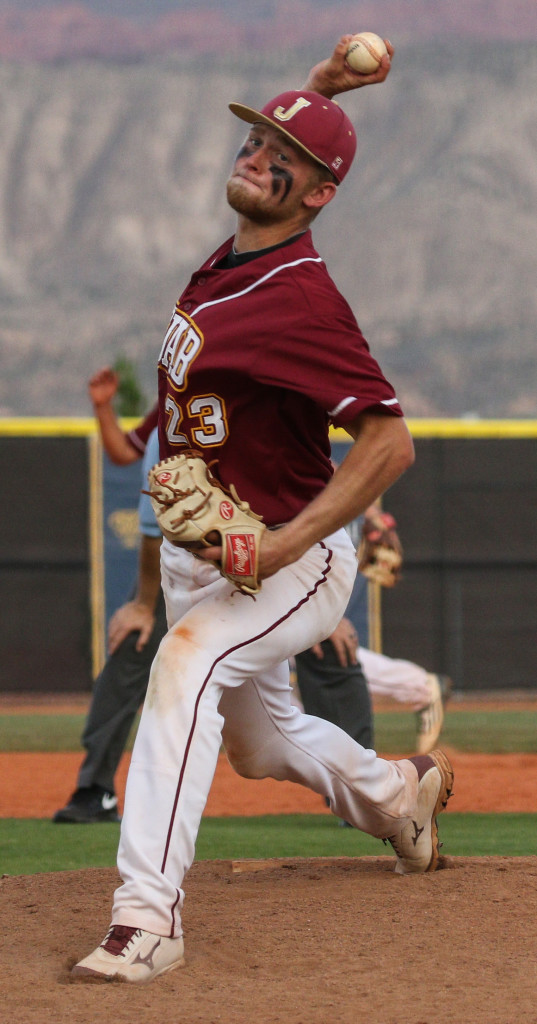 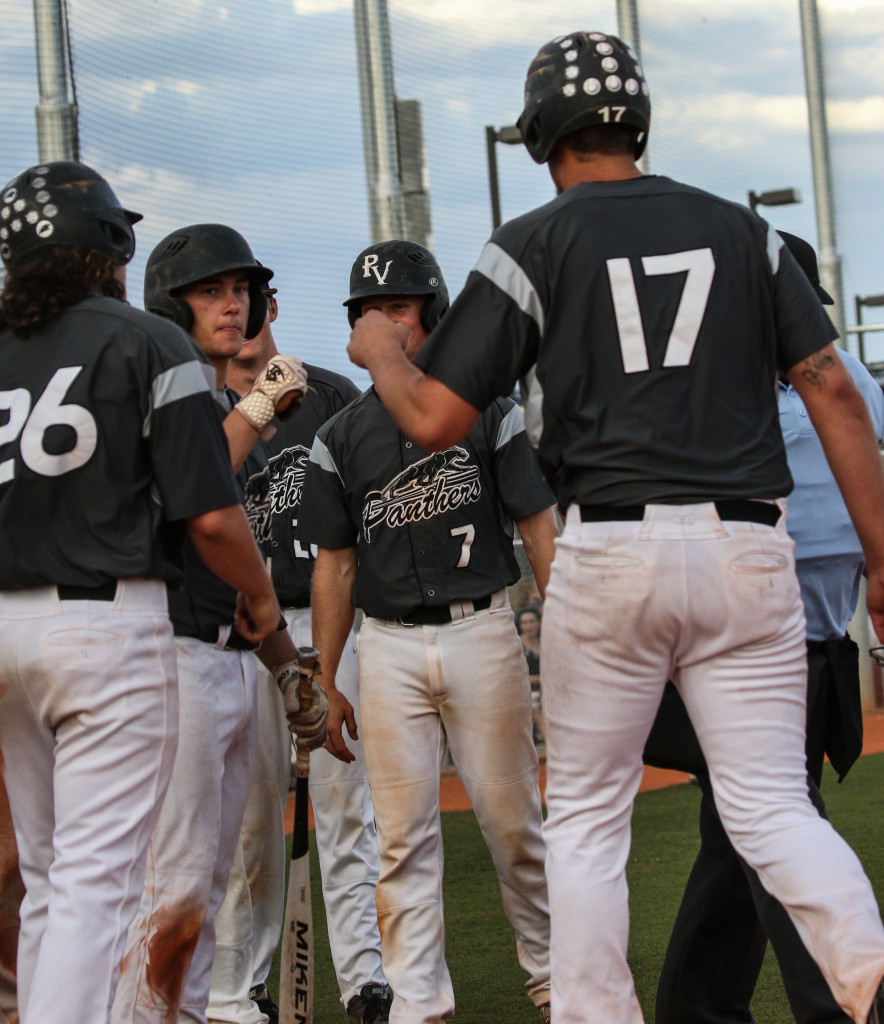 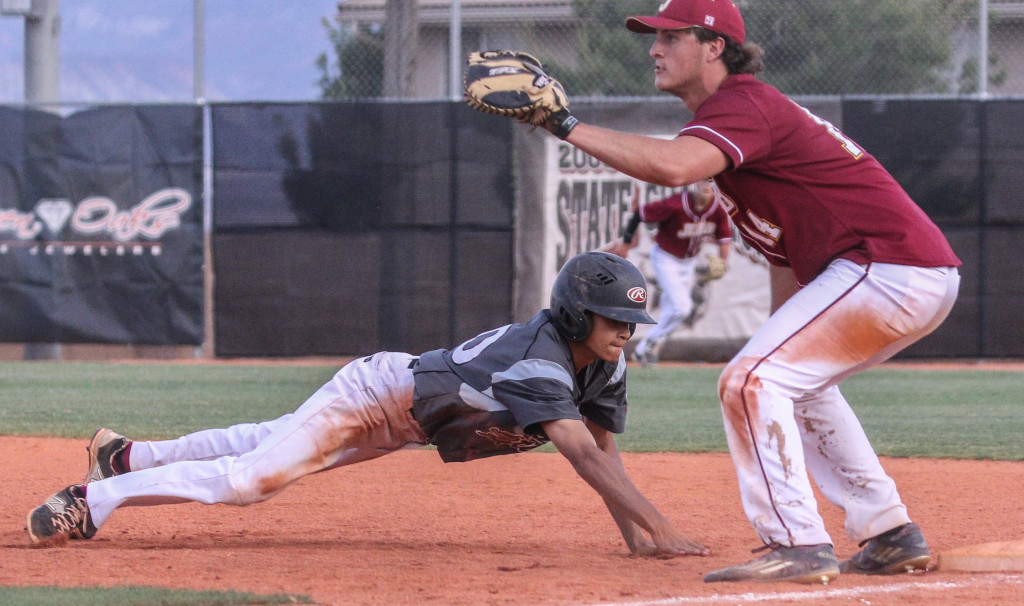 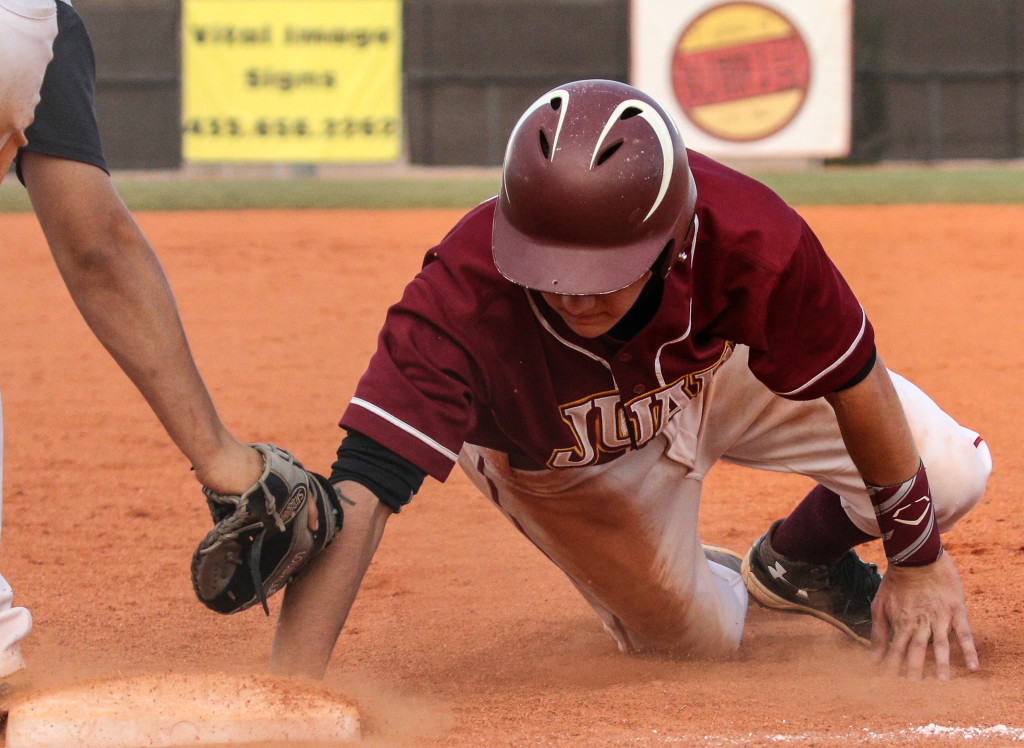 Prep playoffs live: Updated scores from around the state (updated)