ST. GEORGE – A concerted search effort of multiple agencies in Coconino National Forest, Arizona, that began Friday ended Sunday when the body of 59-year-old Debra Schwartz was found in a slot canyon.

Schwartz, an Arizona State University Professor, checked into Pine Flat Campground in Oak Creek Canyon and was planning to camp alone from Tuesday-Thursday. When she failed to check out as scheduled, the campsite host notified authorities she was missing and a massive search effort was initiated.

At approximately 11:10 a.m. Sunday the body of Schwartz was located in an unnamed slot canyon below the rim of Oak Creek Canyon. According to a news release issued Sunday by the Coconino Sheriff’s Office, a three-member technical rescue team that was tasked with checking the slot canyons located her body.

Cause of death has not yet been determined.

On the third day of the intensive search for Schwartz, rescuers were in the field and under way by daylight. Sunday the search resources consisted of:

The three technical rescue teams that were deployed Sunday were assigned to thoroughly check the slot canyons in the area, leading to the location of Schwartz’s body.

The technical rescue team completed two rope rappels to make their way into the canyon to a spot where they were able to see the body and then a third rappel to actually reach the body. She was located approximately ½ mile from her campsite.

Assisting the Coconino Sheriff’s Office were: Yavapai County Sheriff’s Office and Search and Rescue Unit that provided ground searchers, dog search teams, mounted searchers, the Yavapai County Jeep Posse, its Air Rescue Helicopter and technical rescue teams; Arizona Department of Public Safety that contributed air rescue helicopters and crews based in Flagstaff and in Kingman; the ASU Police Department that helped gather information to help in the investigation; and, the Sheriff’s Office said in its release, the tireless men and women of the Coconino County Search and Rescue Unit. 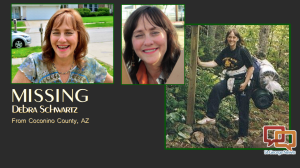 Mom of 2 kids missing from Rexburg, Idaho, found in Hawaii with new husband

'We need to be in charge of our own government again'; Sen. Mike Lee hosts town hall at SUU