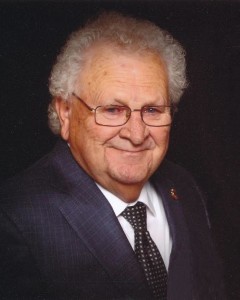 Martin Arthur Sherman passed away April 24 at his home in Cedar City, Utah, at the age of 83. He was born Sept. 6, 1932, in Wichita, Kansas, to Alonzo and Gerda Sherman.

Marty — as he was known to his friends and family — grew up in Wichita, where he worked in the family auction and restaurant businesses. He and his first wife, Barbara Smith, had four children. Marty then moved to Henderson, Nevada, where he was a lieutenant in the Henderson Police Department and president of the Henderson Police Benevolent Association. At the police department, he met co-worker Patricia Rae. They were married on May 13, 1972, and were later sealed in the Las Vegas Temple of The Church of Jesus Christ of Latter-day Saints. Marty was a mid-life convert to The Church of Jesus Christ of Latter-day Saints and treasured his membership in it.

After leaving the police force, Marty owned a lock shop in Las Vegas, Jack’s Key Service, and then worked as a property manager in a real estate firm, Nevada Properties. He and his wife, Pat, retired to Cedar City in 2003.

Marty was active in the Lions’ Club in Southern Nevada and Cedar City, serving as a district governor in Utah and receiving many distinguished service awards, including the Melvin Jones Fellowship, the Helen Keller Fellowship and the Dr. Wayne Cannon Patron of Sight Fellowship. In Cedar City, Marty was instrumental in many Lions’ Club projects, including the Veterans Memorial Park, the downtown park pavilion, Lions’-sponsored bus stops and fund raising efforts for the blind.

At home, Marty loved to be in his extensive workshop, where he did woodworking, metal art and jewelry.

Marty was preceded in death by his parents, his brother Lewis Sherman, and his son Alan James Sherman.

The family suggests contributions in lieu of flowers to the Huntsman Cancer Foundation.