Boxer Pano Tiatia appears in promotional material for "The Beginning," his professional boxing debut to be held at the Dixie Center In St. George, Utah. Location and date of photo not specified | Photo Courtesy of Victory Boxing Promotions, St. George News

ST. GEORGE — St. George’s own Ropati “Pano” Tiatia will add the title of professional boxer to his already impressive sports resumé Saturday when he steps into the ring at the Dixie Center St. George in Victory Boxing Promotions’ inaugural event, dubbed “The Beginning.”

The nine-time National Junior Golden Gloves Champion and USA World Open Champion will top an eight-bout card at the Dixie Center, 1835 Convention Center Drive, which will feature top undefeated boxing prospects from around the country.

Tiatia, a heavyweight standout who caught the attention of local sports media with an impressive high school football career, earned regional MVP and First Team All State honors during his time at Pineview High School in St. George.

Despite his success on the gridiron, boxing lit a fire in Tiatia like no other sport had, according to a news release from Victory Boxings, and after high school, he set his sights on winning a world title.

“St. George’s fans and media have been supporting me since I was a kid,” Pano Tiatia said.  “It’s a dream come true to begin my professional journey here in my hometown, in front of my family and friends.”

The days are long for 19-year-old Pano Tiatia, who wakes at 6 a.m. to begin training and roadwork before he starts a 10-hour shift at his family’s restaurant, Island Grinds.

“This is his dream,” his father, Paki Tiatia, said.

Paki Tiatia owns the restaurant and trains his son late into the night after its closing each day.

“It’s not always easy, but the community has always supported us, and it’s my job to support Pano in his dream,” Paki Tiatia said.

Paki Tiatia knows quite a bit about supporting young people in their dreams.  In addition to the rigorous work and training schedules he maintains for his family, he runs a nonprofit organization to help at-risk youth called New Beginnings Academy.  The organization targets homeless and at-risk kids, sponsoring their athletic and academic endeavors.

“It’s truly a blessing to be working with the Tiatia family on Pano’s debut here in St. George,” said Victory Boxing Promotions founder and promoter Christopher Middendorf.  “It’s great to be working with a family that has had such an impact on the community here, and I’m looking forward to seeing Pano show his friends and supporters what the future holds.  This truly is ‘The Beginning.’”

Tiatia recently inked a management deal with former Boxing Writers Association of America Manager of the Year Cameron Dunkin, who has guided the careers of tens of World Champions, including Kelly Pavlik, Terence Crawford, Brandon Rios and others.

“Pano is an outstanding fighter, from an outstanding family. He’s going to bring a title to St. George in the next few years, and I’m proud to be a part of his career from the very start,” said Dunkin of his fighter’s hometown debut. 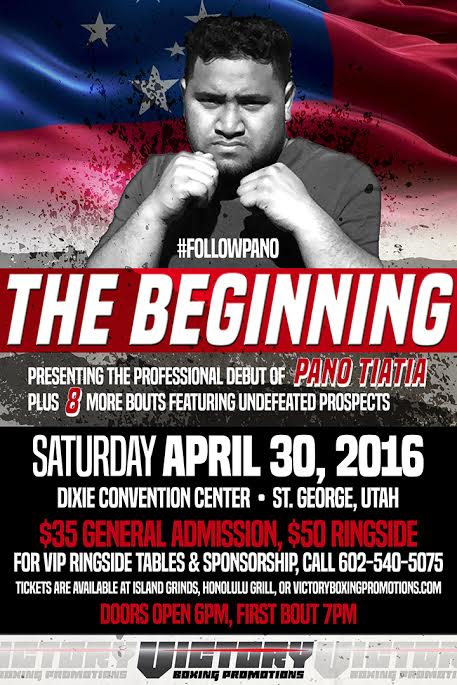 Tickets are priced at $50 for ringside seats and $35 for general admission seats and are available along with VIP tables at victoryboxingpromotions.com or at Island Grinds, 1973 W. Sunset Blvd. and Honolulu Grill,  700 East 700 South in St. George.

In addition to fight night, the public is invited to attend events leading up to the competition. Below is a schedule of fight week events:

Local youth is powerhouse in and out of ring

Get out and ride, because at its heart, 'cycling is about having fun'