All three road teams won in Region 9 baseball Friday night, including Hurricane, which went 0-12 in region last season. The Tigers stunned the defending state-champion Panthers 3-2. Here’s a look at the night’s action:

First-year head coach Jon Homer pretty much summed up the turn of events that led to the road upset.

“I’m still trying to wrap my mind around it,” he said. “Coming off of that Tuesday game, well that was one of the lowest of the lows. And now we’re really high with this win tonight. But I keep telling the guys that we’ve got to keep it up. We can’t be satisfied. We have to keep playing like this every Tuesday and Friday.”

It was quite a week for the Tigers, who shocked Desert Hills in a rain-postponed game Monday night, lost a heartbreaker to Pine View at home on Tuesday, then pulled off a road stunner Friday night.

“You know, my brother is Chris (Homer) and he turned the football program around at Hurricane,” Jon Homer said. “All it takes is one special group of kids who is willing to put in more time and effort than ever before to turn a whole program around. I always tell them that there is absolutely no reason we can’t be as good as the St. George schools. I’ve said that for years.”

Hurricane fell behind 2-0 in this game, with the Panthers scratching across a pair of runs in the first two innings. Logan Lafemina fueled the runs, scoring in the first after a lead-off triple and then knocking Jarod Stirling home in the second with his second triple of the game.

But the well went dry after that as Hurricane starter Alec Flemetakis shut Pine View down, posting up zeroes in the third, fourth and fifth innings.

The Hurricane offense starting chipping away at the lead despite impressive pitching by Connor Clark. He allowed just two hits in 5.2 innings, but two runs scored after errors in the fourth and sixth innings. Flemetakis and Tobie Swenson had RBIs in those two innings.

With both starters giving way to the bullpen. The game went into the seventh tied at 2-2. Hurricane immediately put together a rally, with the 7-8-9 hitters loading up the bases. Michael Lacy singled, Thomas Christiansen walked and Lucas Stout reached on an error with two outs.

Kyle Williams then stepped to the plate and was promptly plunked by PV pitcher Brooks Barney to force home the go-ahead run. Barney got out of the jam after that, but the Tigers now had a 3-2 lead.

Like in Tuesday’s contest, the game ended in a bizarre way. With one out and Dakota Donovan at second base, Pine View was looking to tie the game. A ground ball turned into a force-out at first, with Donovan sprinting for third on the play. Hurricane tried to gun him down after the force, but the ball was overthrown. Donovan then sprinted for home, but Flemetakis had backed up the play and gunned it home for the third out and the end of the game.

“It was a strange end to a game,” Homer said. “But Alec made a heck of a play. We were just like, ‘Wow!’ after the game ended. We were disappointed with the way Tuesday’s game ended, but I think it gave us confidence that we knew we could play with these guys. Sometimes it’s all about just getting the guys to believe.”

The Tigers, who only had three hits in the game, improve to 8-6 overall, 2-2 in region play, having split with last year’s two region co-champions. Williams got the win, pitching two scoreless innings of relief. Hurricane plays two games vs. Dixie next week.

Pine View, which had six hits (three by Lafemina, two by Tyler Johnston), falls to 11-5 overall, 3-1 in region play. The Panthers have two games vs. Cedar next week.

Chad Nelson had one of those nights many of us just dream about.

The Thunder junior pitched six magnificent innings on the mound and homered for his team as well in helping Desert Hills complete a two-game sweep of the Flyers.

“We really needed this win,” Nelson said. “Me personally, I was just focusing on doing my job, locating my pitches, and then at the plate, waiting for my pitch to hit.”

Nelson shut the Flyers out on their own field through the first four innings and when he took the mound for the fifth, his teammates had helped to build a 6-0 lead.

“Chad, what he did tonight, that’s huge for us,” DH coach Jerry Beck said. “Stretching him out like we did this week, asking him to start two games — originally we weren’t planning on that, but as the week went he felt better and better. And then to see him get the big home run, well, Chad was huge for us this week, no doubt about it.”

Nelson scattered seven hits in six innings of work, allowing two earned runs. He was good, especially when faced with adversity. In the third inning, with the tying run at the plate, he struck out Dixie slugger Tyson Fisher with the bases loaded to end the inning. Again Dixie loaded them up in the bottom of the fifth, but Nelson got another Dixie slugger, Trevor Connell, to ground out to short.

“Chad did a really good job of staying focused and keeping his composure out there,” Beck said. “Those are things he’s been working on over the last year, basically, and I really feel like he’s come a long way with his composure and mound presence and he’s just doing a phenomenal job.”

It also helped that he had a lead the entire game. Desert Hills got two runs in the top of the first on a gapper by Daniel Arrey that scored Quinn Kiser and Brayson Hurdsman.

The Thunder doubled the lead in the third to 4-0 on an RBI double by Hurdsman and an RBI single by Arrey.

With Nelson wriggling out of trouble on the mound, DH was able to push its lead to 6-0 in the fifth with Nelson’s two-run homer to left with two outs and Trey Winget on base.

Dixie got a run in the bottom of the fifth on an RBI single by Wyatt Woodland, and then cut it to 6-2 in the sixth when Chance Vowell hit a moon shot over the left field fence.

DH added an insurance run in the top of the seventh when Winget doubled, then scored on a DH error. He came in to pitch in the bottom of the seventh and things got a little dicey for the Thunder.

Winget walked two batters, gave up two hits and the Flyers were able to cut it to 7-4 on two-out RBIs by Connell and Vowell. But Winget made a savvy pick-off move to first with the tying run at the plate to catch a Dixie base runner napping and end the game.

The Thunder had six extra-base hits and 10 total hits in the game, including a triple by Winget. Hurdsman doubled twice and Arrey had threee RBIs.

Dixie got a three-hit game out of Vowell. He also had two RBIs as Dixie finished with nine hits in the contest.

Desert Hills, 8-9 overall and 3-1 in region, will battle Snow Canyon twice next week.

The senior right-hander allowed just three hits — and only one after the first inning — as the Redmen earned a split for the week against the Warriors.

“We would have been in trouble if we had gone to 0-4 in region,” Cedar coach Eric Fieldsted said. “Berick Englestead just locked things down for us after that first inning.”

The game started like the last game (a 13-2 Snow Canyon win) ended, with the Warriors jumping all over Cedar. Snow Canyon had a 2-0 lead after a Cedar error was followed by big hits from Austin Deming and Cannon Secrist.

“We actually should have gotten out of that first inning, but our left fielder just dropped the ball,” Fieldsted said. “Deming doubled after that and Secrist singled to bring him home, so we kind of opened the door a little. But after those two hits, Englestead only gave up one more hit the rest of the game.”

In the second inning, Cedar scored a run, but a bases loaded popup that was not called an infield fly-rule play, turned into a double play to end the threat.

“We could have crumbled after that,” Fieldsted said. “It was controversial and our guys were upset. But it was out of our control and we just had to let it go and take care of the things we could control. I think we were pressing against Dixie and earlier this week against Snow Canyon. We just need to worry about ourselves.”

The Redmen got an RBI double from Ryan Slack and a follow-up RBI single from Travis Tait to take their first lead of the night in the top of the third at 3-2. Drake Lewis added to the CHS advantage with a two-run single in the fourth to make it 5-2 and Englestead made the lead stand up.

“He did a really good job of staying in the strike zone and mixing up his speeds,” Fieldsted said. “He hit his spots well and was in control all night.”

Lewis, Tait and Jaden Hulet had two hits each to lead the Cedar attack. The Redmen had nine hits and drew seven Snow Canyon walks.

The Warriors 1-2-3 hitters were a combined 0 for 7 against Englestead. Tanner Howell was effective in relief for Snow Canyon, pitching 3.2 innings and allowing no runs. 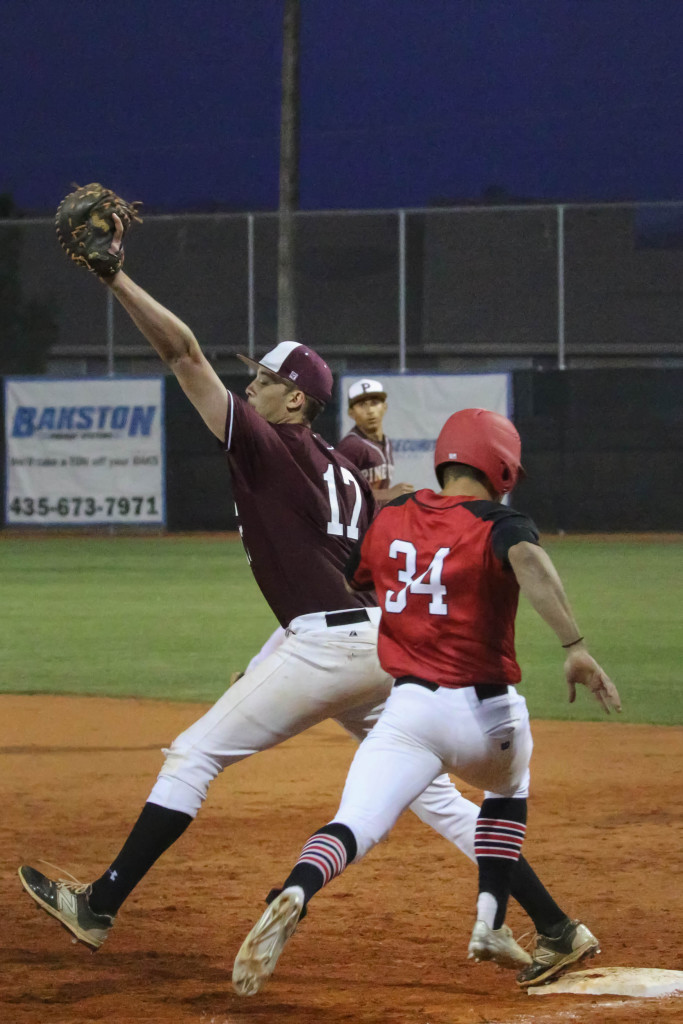 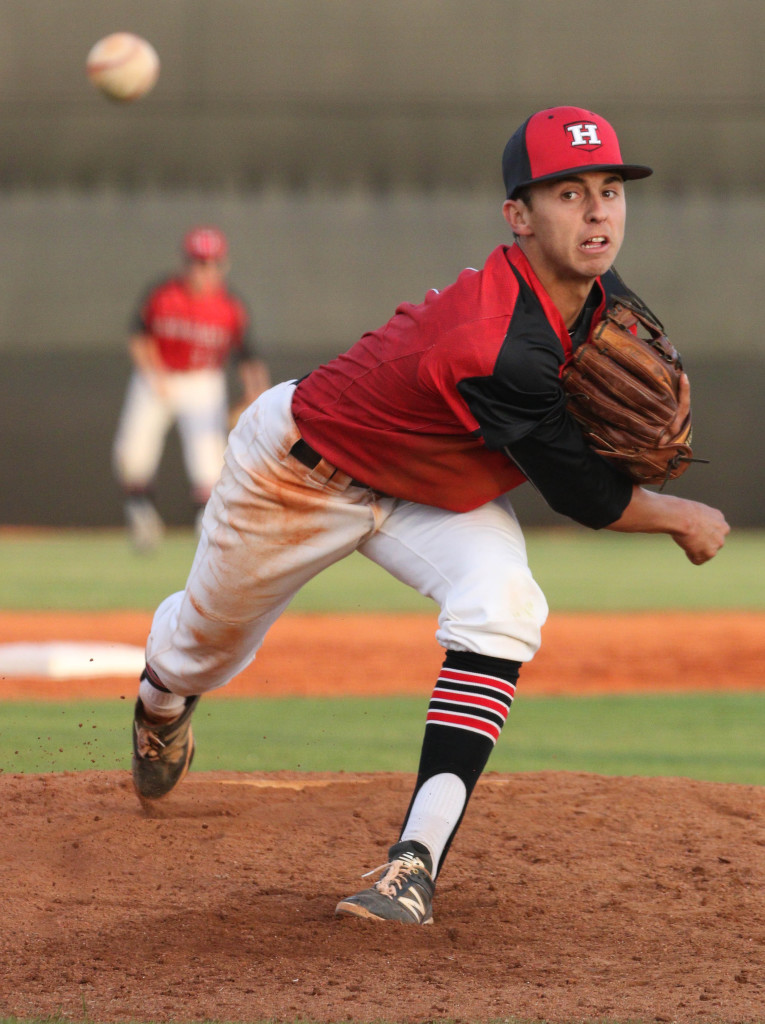 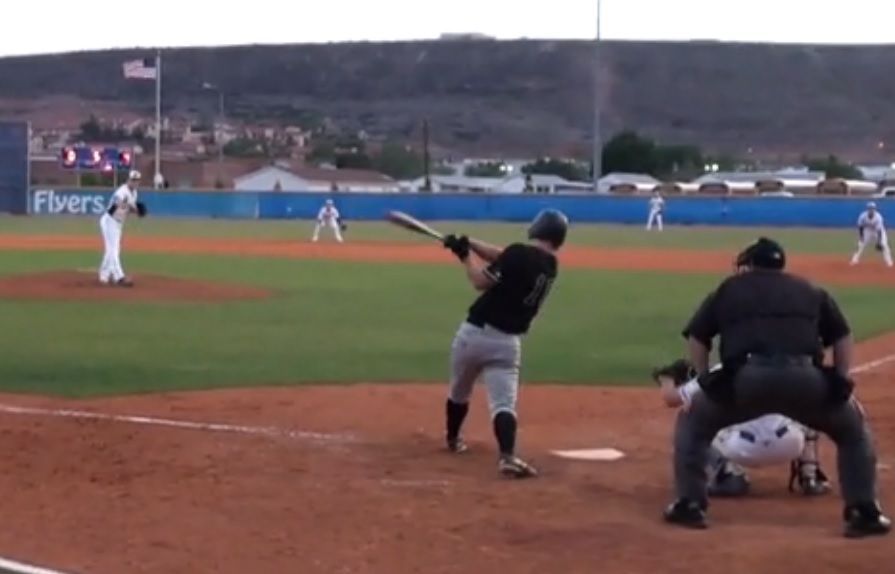 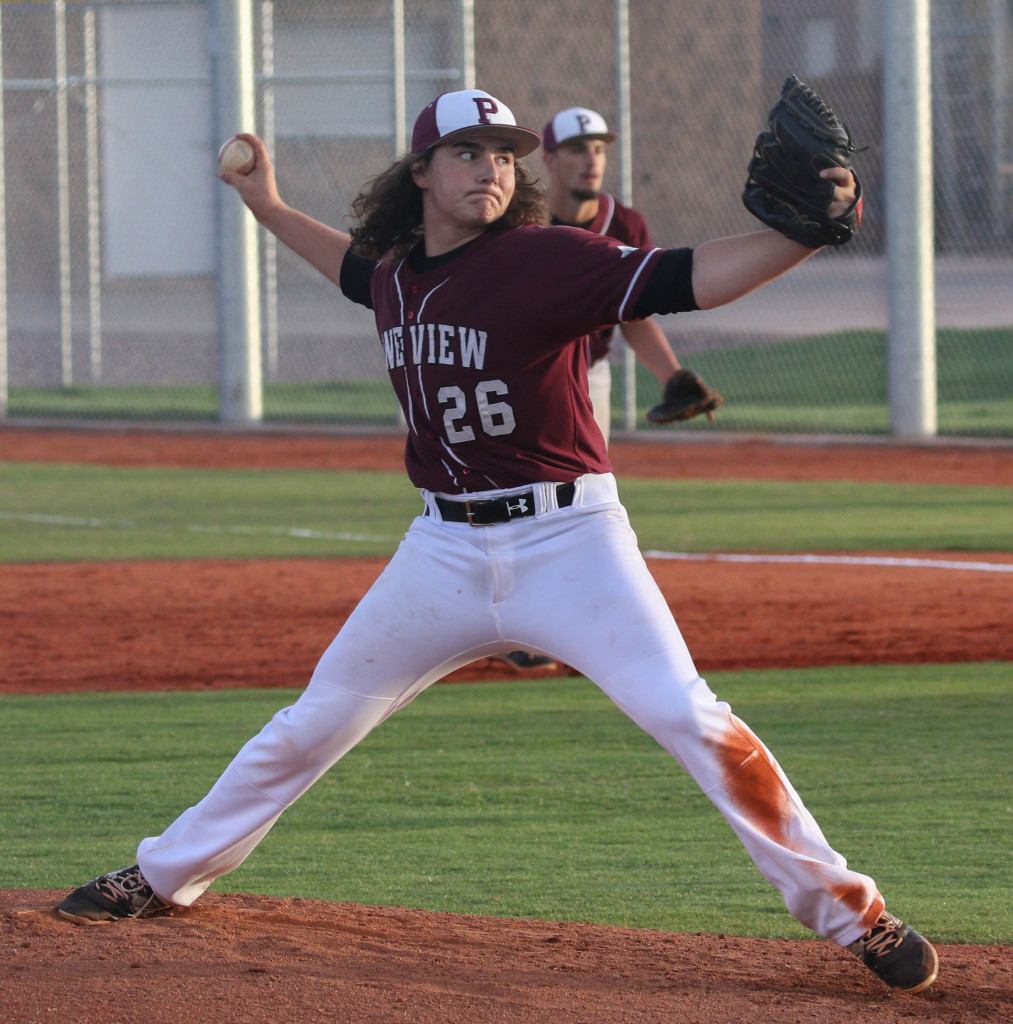 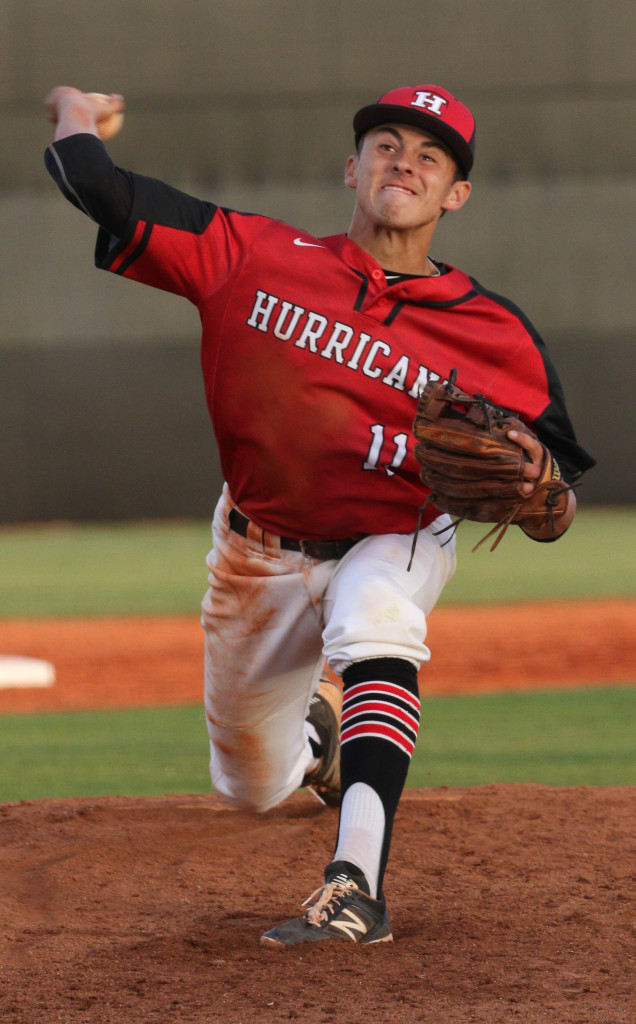 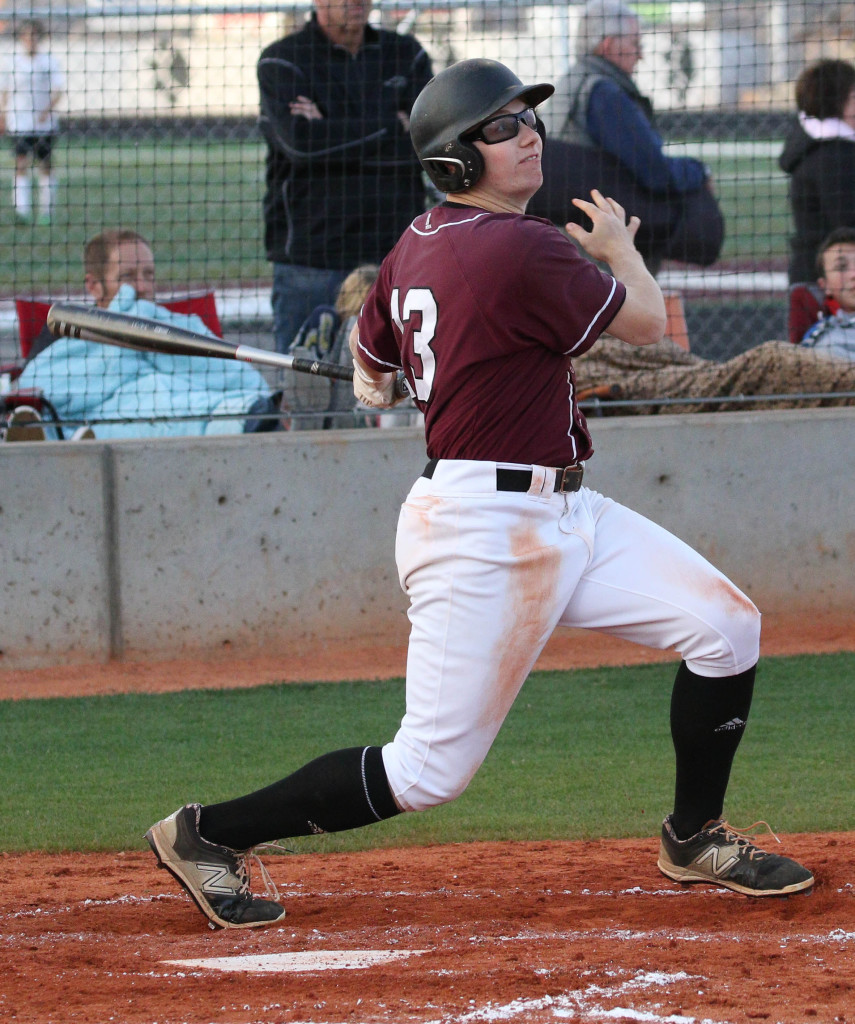 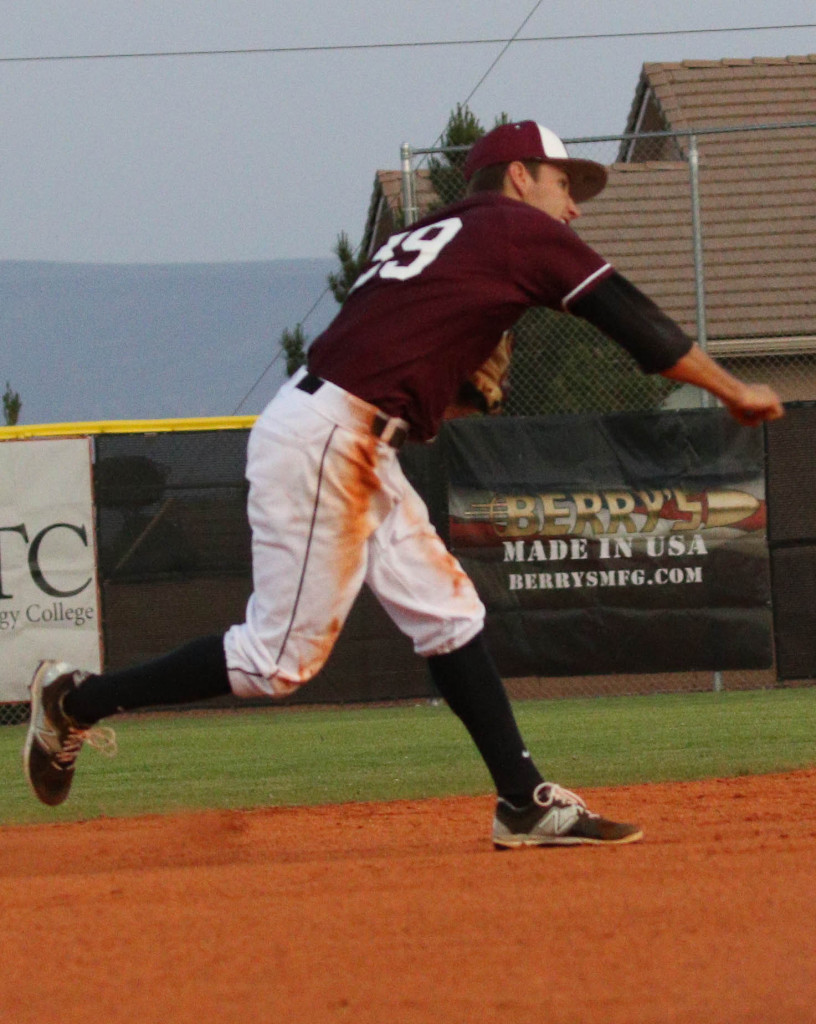 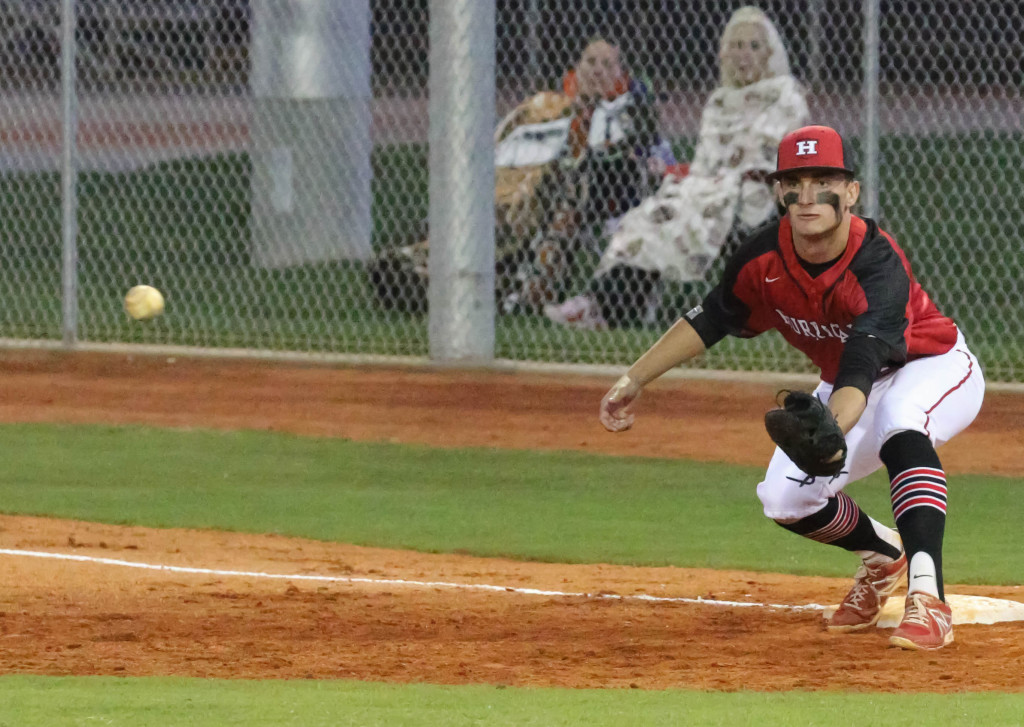 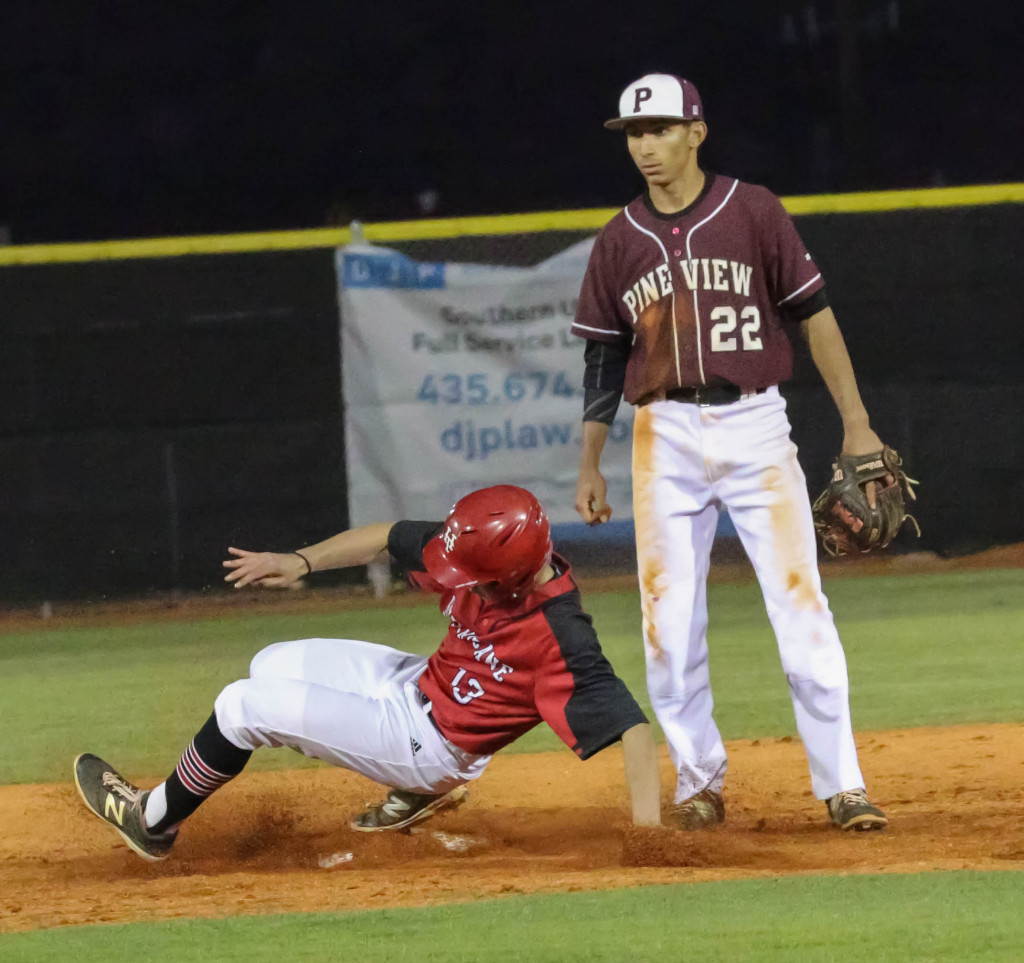