ST. GEORGE – Two region leaders squared off in the first game of the second half of region play while the third leader squeaked by to keep pace. Below is how the Region 9 softball action played out Friday night:

In a battle of two of the top teams, the Lady Thunder avenged their only region loss with a 9-5 win over visiting Cedar. Desert Hills took advantage of early mistakes to take a commanding 9-0 lead, then hold on for the win.

“We definitely wanted to avenge our earlier loss,” said Desert Hills head coach Brady Fonnesbeck. “The girls were hyped up for this game.”

In the first inning, the top of the lineup all reached on a hit by pitch and two errors. With runners on second and third, Sophie Wilcox rapped a hard grounder to second base. The resulting miscue and late throw resulted in runs scored by Shelby Reynolds and Brianna St. Clair for the early 2-0 lead.

Two more errors in the second led to two more runs by the Lady Thunder. With one out, Megan Wiscombe reached on a fielding error. The runners were both safe when Morgynn Rosemeyer laid down a bunt and a throwing error to first. Reynolds then advanced the runners with a rap to first base. St. Clair then hit a triple to score the two runs. St. Clair tried to turn the hit into a home run. She actually beat the throw but got tagged out after an awkward slide.

“Her catcher’s mask was right where I usually slide,” said St. Clair. “It messed me up and trying to avoid it I slid too wide.” But the damage was done and Desert Hills had an early 4-0 lead.

“It is hard to explain,” said Cedar head coach Chris Weaver. “I know we are capable of playing great defense. We played well against Snow Canyon. But today we had a tough time.”

The next inning, things got even worse for Cedar. Wilcox started the inning with a stand-up double through the middle. Kodi Salisbury hit a ground out to third base, but the hit moved Wilcox to third. Ashley File then rapped a double to center field to score Wilcox. Dalys Coil was then hit by pitch to put runners at first and second. Sammie Clark then laid down a bunt and beat out the throw for the third hit of the inning.

With the bases loaded, Wiscombe was hit by the first pitch thrown to her to score File. Rosemeyer then hit a single through the left side to score Coil. With Reynolds batting, Rosemeyer got picked off at first. Reynolds then hit a double that scored Clark and Wiscombe. Cedar got out of the inning with the next batter, but the Thunder lead had grown to 9-0.

Cedar finally got on the board in the fourth. Hannah Williams reached on a throwing error then advanced to second. Pua Johnson’s groundout to short advanced Williams to third. Williams then scored on a wild pitch. St Clair then struck out the final two batters to end the inning 9-1.

Cedar added two more in the next inning. After Sadie Leavitt drew a walk, Sage Oldroyd’s single through the left side put runners at the corners. Abbi Anderson’s bunt single loaded the bases. Allie Meisner then singled to score two runs. But with runners in scoring position and nobody out, St. Clair got the final three batters to pop up. Notably, Wiscombe’s running catch in center field on a hit by Dream Weaver kept Cedar from putting up two more runs. “If she does not make that catch, we got a big momentum swing,” said Coach Weaver. “That was a great play.”

Cedar added a run in the seventh, but it was not nearly enough.

The win for Desert Hills could determine how the region plays out. “There are still a lot of games left,” said Fonnesbeck. “But if we can win our next few we could be playing Snow Canyon to determine the top of the standings.”

Desert Hills moves to 19-3 overall and 5-1 in Region 9. The Lady Thunder have won eight in a row and 17 of their last 18 games. They will host Hurricane on Tuesday. Cedar falls to 11-8 overall and now have dropped their last two region games after starting out 4-0. They will travel to Pine View on Tuesday.

The Lady Tigers are still winless in region play, but their losses have all been painfully close. Facing region leader Snow Canyon proved to be more of a daunting task for the visiting Lady Warriors. In the bottom of the second inning, Hurricane put up four runs to take its first lead, 4-1.

After the leadoff batter struck out, Hayley Teta drew a walk. Jayden Smith then hit a two-run homer to pull the Tigers to within one, 9-8. Savannah Garner then got a base hit and advanced to second on a sacrifice bunt by Kolea Paleka.

“We had the tying run in scoring position with a good hitter at the plate,” said Hurricane head coach Gordon Dotson. “But (we) went down swinging to end the game.”

Heather Prestwich pitched a complete game for the win, striking out eight. Offensively for the Lady Warriors, Camryn Johnson led all batters with three hits, including a home run and a double. Sonya Hardy, Taylor Gunn and Caitlyn Averett each had two hits apiece. Averett also hit a home run.

For the Tigers, Savannah Garner took the loss from the circle. She struck out two batters. Jayden Smith and Garner each had two hits and a home run. Teta and Melina Madsen both had doubles.

Snow Canyon improves to 11-1-1 overall and 5-1 in Region 9. The Warriors will host Dixie on Tuesday. Hurricane falls to 8-11 overall and 0-6 in region play. They will travel to Desert Hills on Tuesday.

A harried comeback came up short for the Lady Flyers. “We were down 8-0 going into the final inning,” said Dixie head coach Dave Demas. “We scored six and had the tying run on board and winning run at the plate. We just could not complete the comeback.”

For most of the game, both teams’ defenses and pitching ruled the night. Going into the fifth inning, Pine View held a slim 1-0 lead. But the Panther bats caught fire and they put up seven runs.

In the seventh, Dixie came alive, but it proved too little.

Addi Horspool got the win from the circle. Horspool struck out eight. Horspool also had two hits for Pine View. She was joined by Ashlyn Gubler and Aubry Nielson in multiple hits. Nielson collected three RBIs.

Kylee Mills took the loss for Dixie. The Lady Flyers were led in hitting by Kamryn Jones with three. Also collecting multiple hits were Mills, Courtney McArthur and Jessica Watkins.

Pine View improves to 10-10 overall and 3-3 in Region 9. The Panthers will host Cedar next Tuesday. Dixie falls to 3-15 overall and 1-5 in region play. DHS will travel to Snow Canyon on Tuesday. 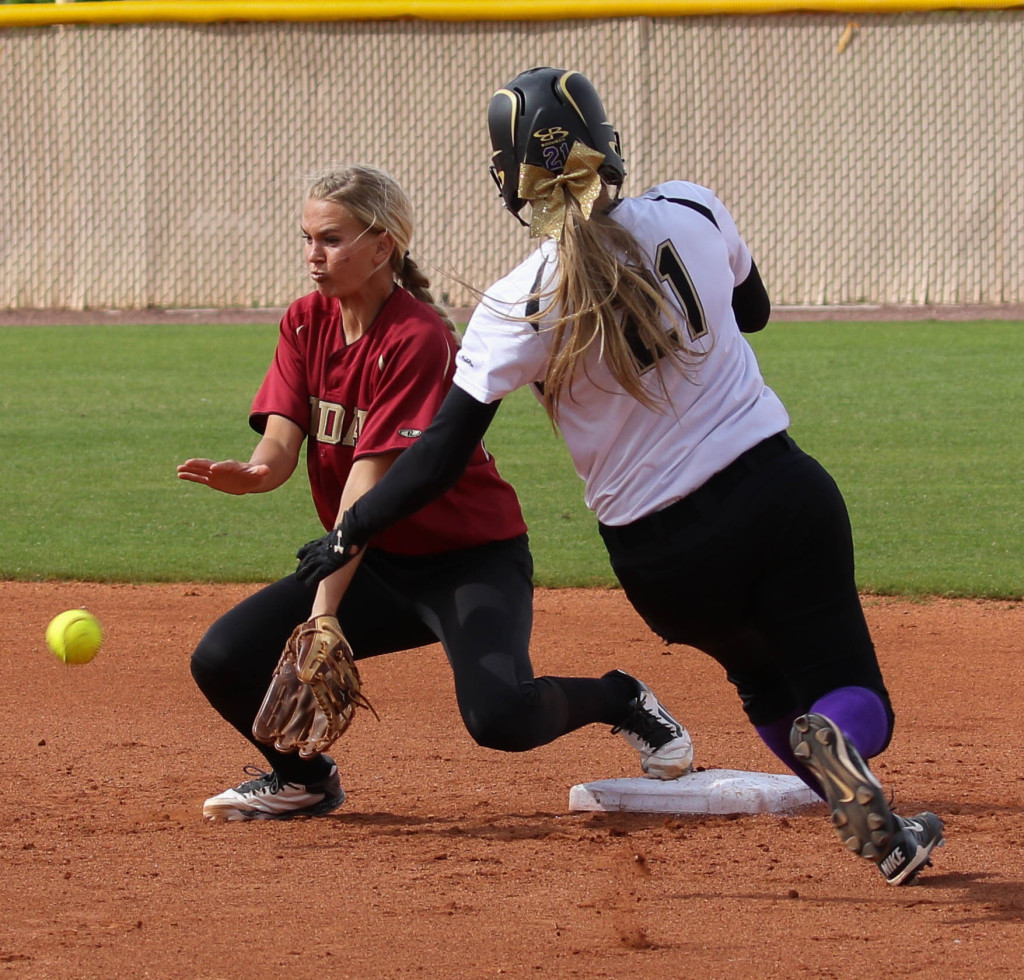 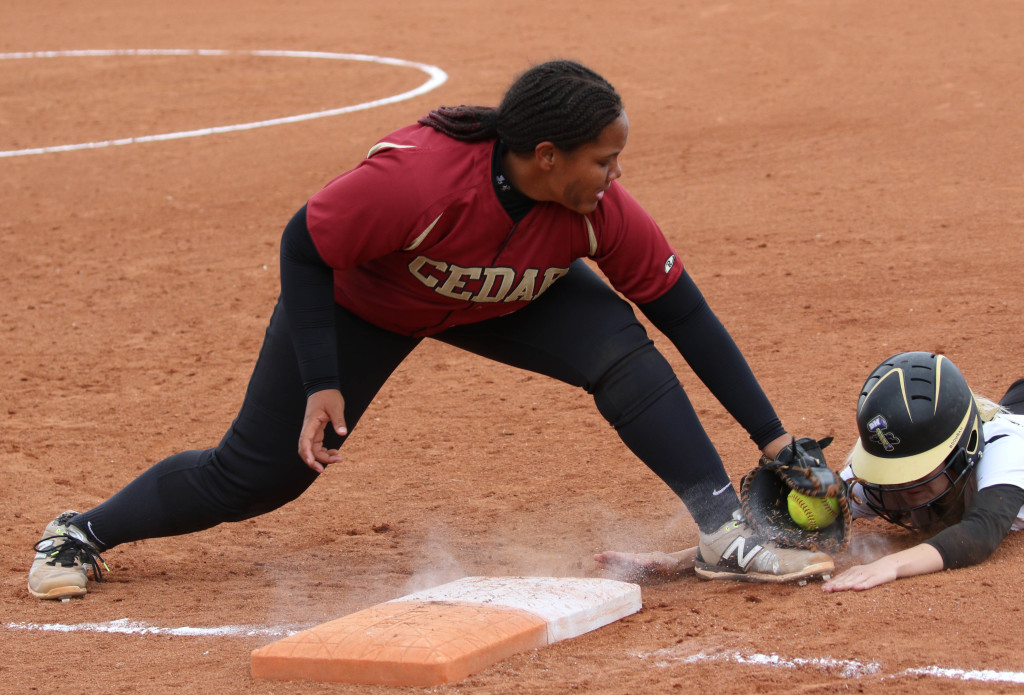 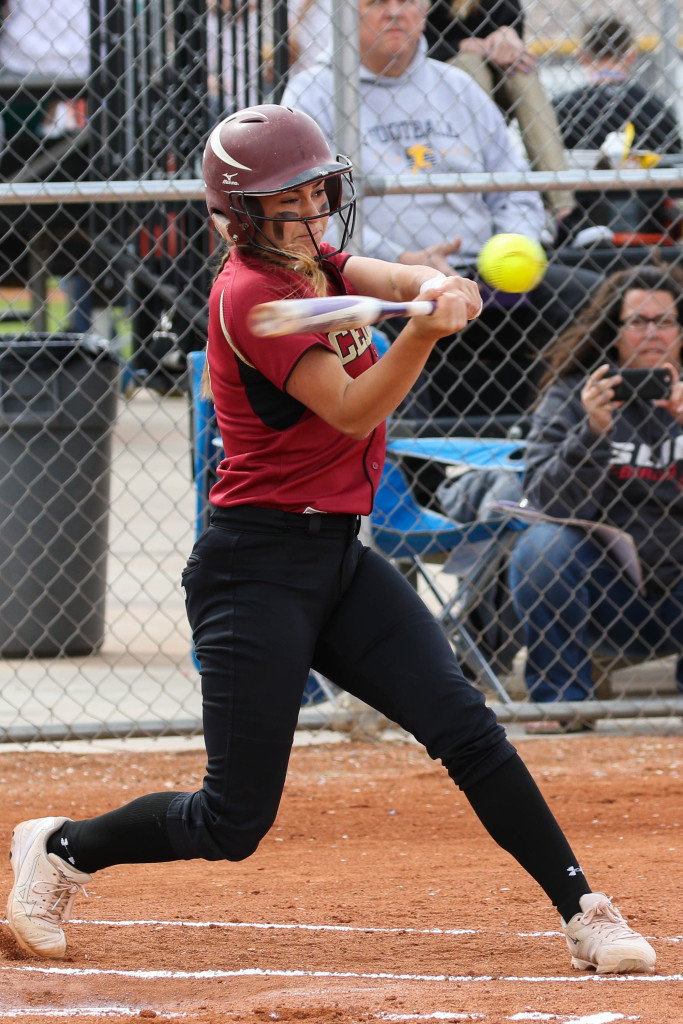 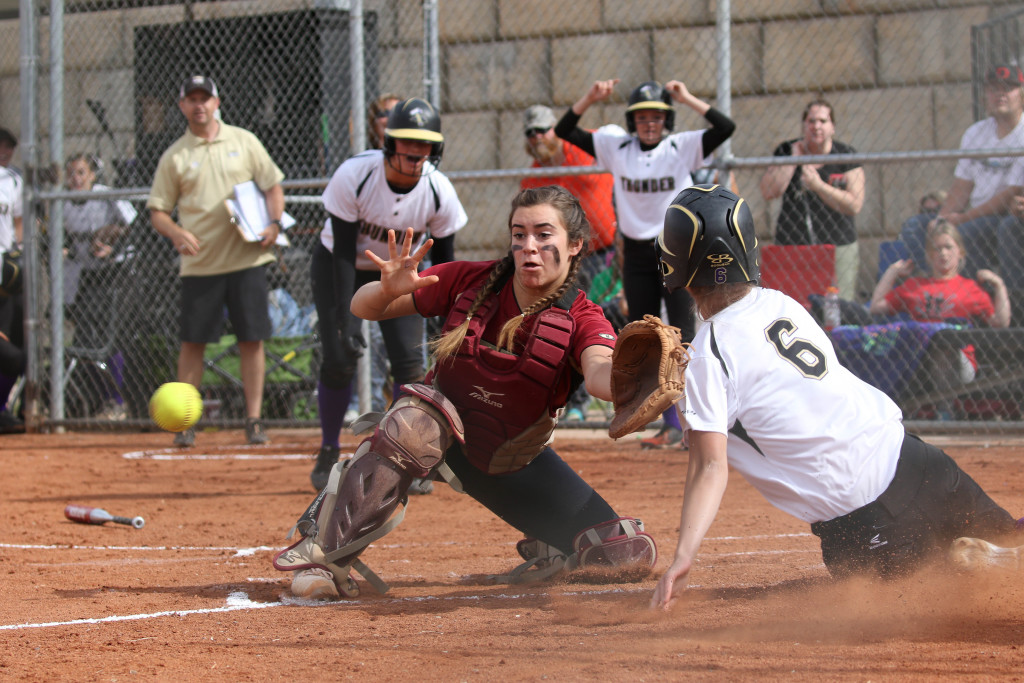 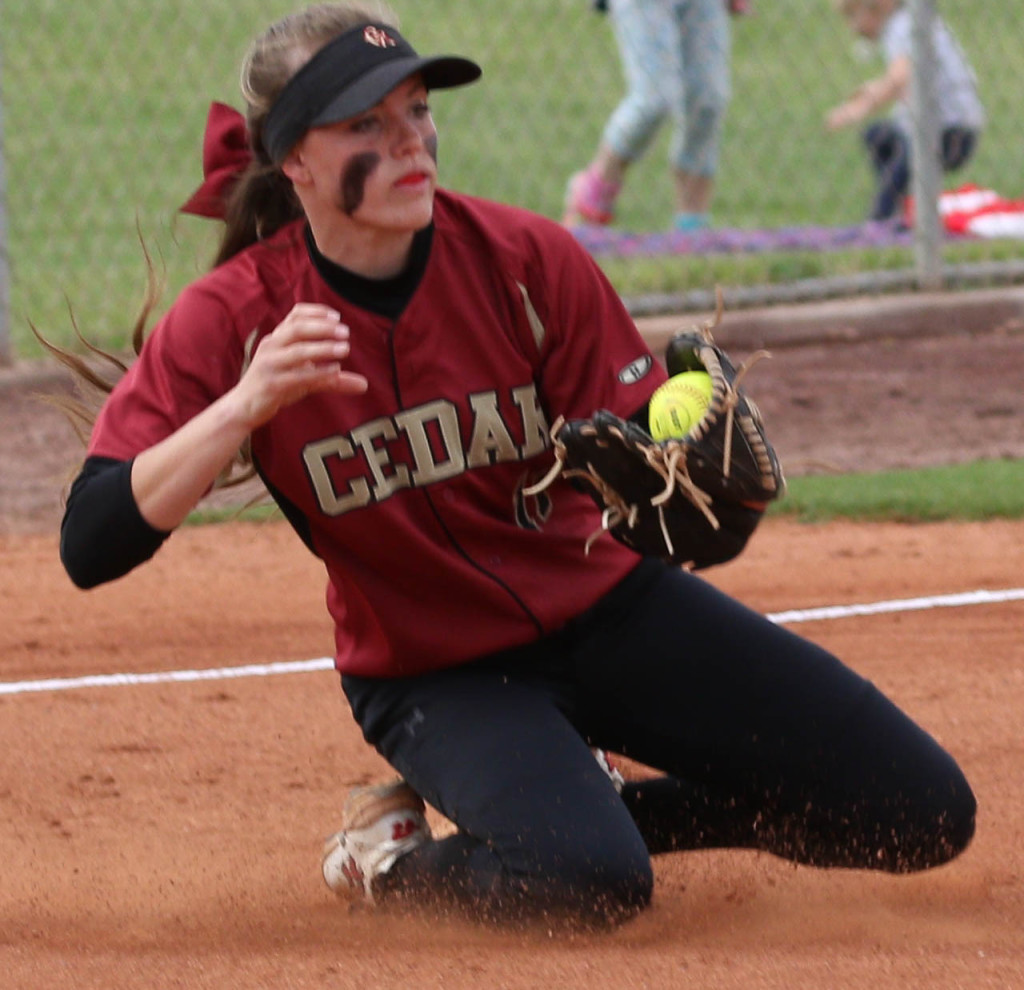 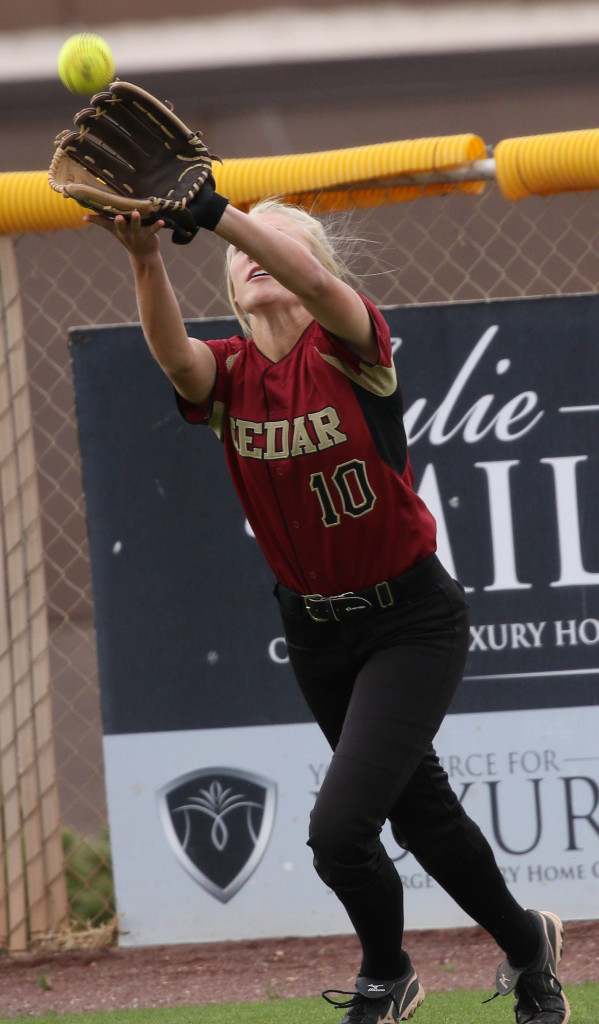 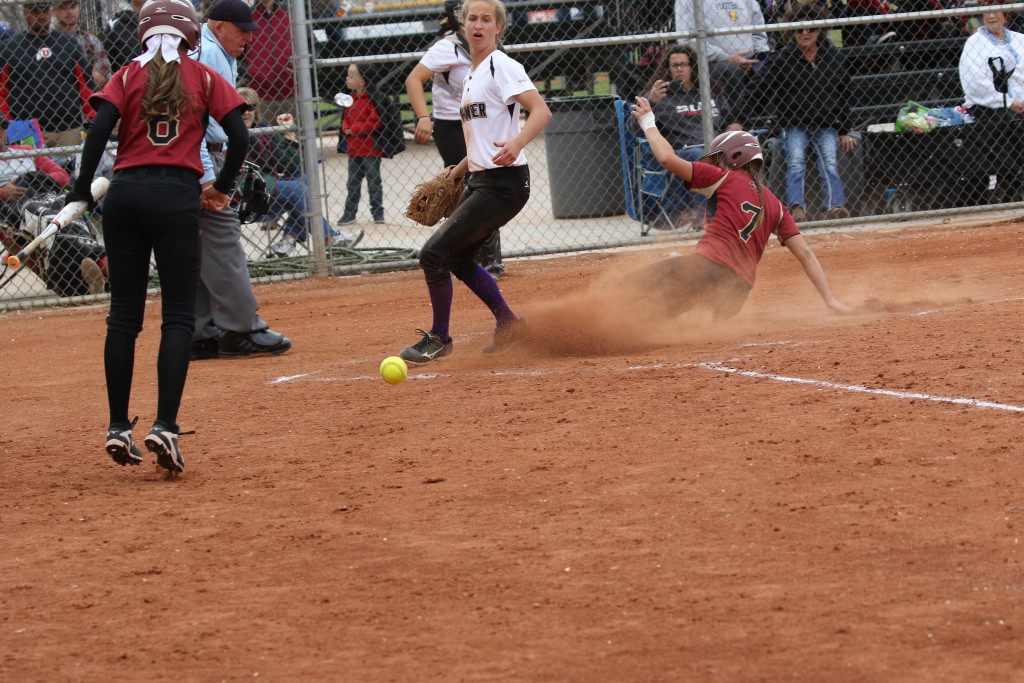