FEATURE – One recreational amenity that is steadily increasing in Washington County and is beloved by many is the county’s network of multiuse trails. Some people use the term “bike path” for these ribbons of 10-foot-wide asphalt typically located along stream and river courses and some major roads. They make cycling a joy, providing opportunities to cruise through the beautiful landscape without having to mingle with vehicle traffic.

The trails are like miniature scenic byways; they have their own center striping to separate the directional flow and can cover quite a distance, creating an exciting sense of touring and adventure. What cyclist wouldn’t love this?

Given all these benefits, many chagrined motorists wonder why on earth a cyclist would choose to ride on a road rather than the nearby multiuse trail. Well, it turns out there are compelling reasons that may be hard to understand unless one is a cyclist.

The biggest factor is the reality that these trails are for all kinds of users, hence the official term  “multiuse” trail. The significant community investment in their development is made worthwhile through the recreational benefits created for a variety of non-motorized users. The broad purposes of the trails can be seen in the City of St. George’s mission statement for its trails: “To provide aesthetic, safe, and functional facilities that support the recreational and visual needs of the community”

Anyone who goes out on our area’s multiuse trails observes the breadth of users. There are single walkers, walkers in groups, walkers with dogs, walkers with babies in strollers, runners, users wearing headphones, skateboarders and yes, those riding bikes — including kids. It’s a wonderful thing, all of these folks enjoying physical exercise in the great outdoors.

But for cyclists, riding on a busy multiuse path may be more dangerous than riding on a road. These miniature scenic byways actually have their own “road respect” etiquette and rules.

However, with a disparity in speeds of pedestrians versus cyclists, plus the potential lack of awareness of other users — especially those approaching from behind — multiuse trails can be an obstacle course rather than a smooth cycling experience. One particular issue that unfortunately has already caused serious injury to some cyclists and is an accident waiting to happen for others revolves around dogs that are off leash or otherwise not under close control.

Flow of movement and safety along multiuse trails can be accomplished through following trail rules and etiquette guidelines, which carry responsibilities for both pedestrians and cyclists. For the City of St. George’s multiuse trails, these include:

Another reason cyclists may choose to ride the road pertains to multiuse trails located alongside roads. A good example of this is the Snow Canyon Trail. Because it is next to a major roadway in an area with residential development, there are many driveways and side roads intersecting with the trail.

The chance for a motorist and cyclist to meet in one of these trail intersections is high and accidents happen. To avoid accidents, both motorists and cyclists should obey stop signs and anticipate the possible presence of the other. For a cyclist who is commuting or seeking a cardiovascular workout, the frequent stopping hinders the purpose of the ride.

A cyclist riding on the road is able to ride through in a manner that is much more predictable for motorists and thus, safer for cyclists. So when you see a cyclist riding the road adjacent to a multiuse trail, this likely is why.

As our multiuse trail network expands in the future, providing both recreational pleasure and alternative transportation opportunities, cyclists will have a greater number of decision points as they weigh whether to ride the road or trail. It’s a good dilemma to have, especially with the practice of road respect among all users. 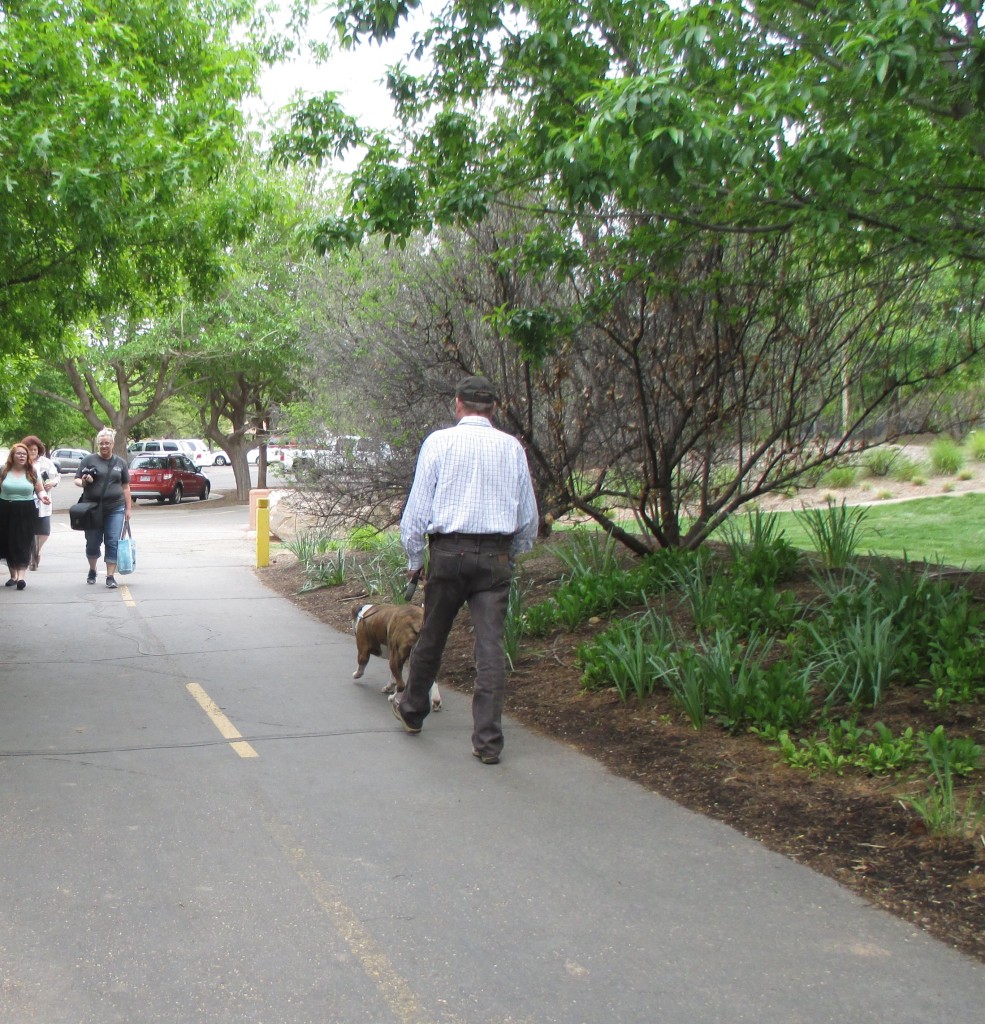 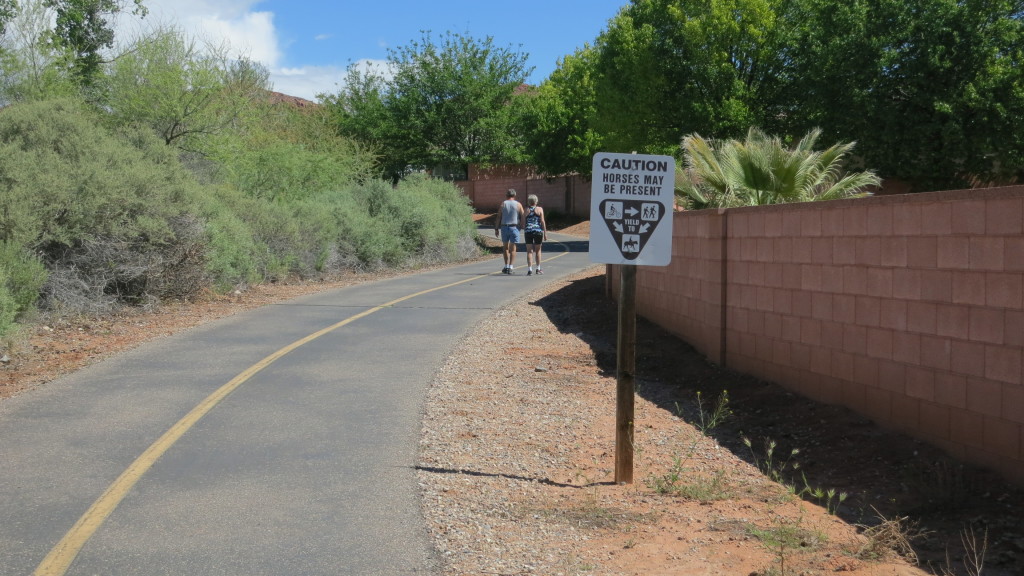 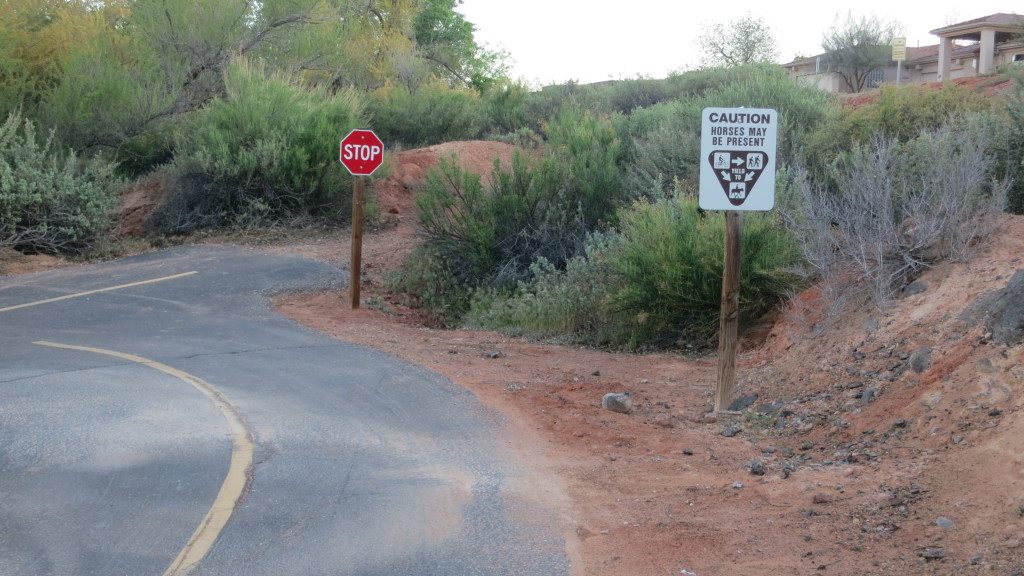 A sign with yield guidelines and a stop sign for trail users on the Snow Canyon Trail near Bluff Street, April 11, 2016. Multiuse trails along major roads often cross driveways or side streets and thus, have stop signs. Riding on the road allows cyclists to ride through and in a way that is more predictable for motorists. St. George, Utah, April 13, 2016 | Photo by Tim Tabor, St. George News 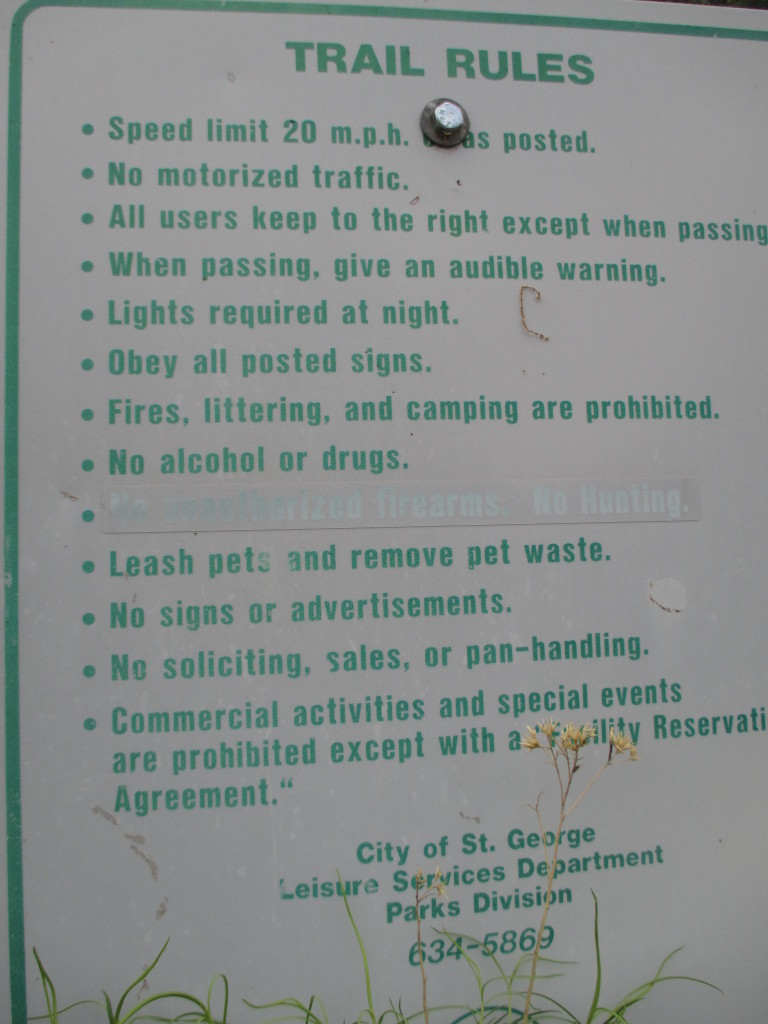 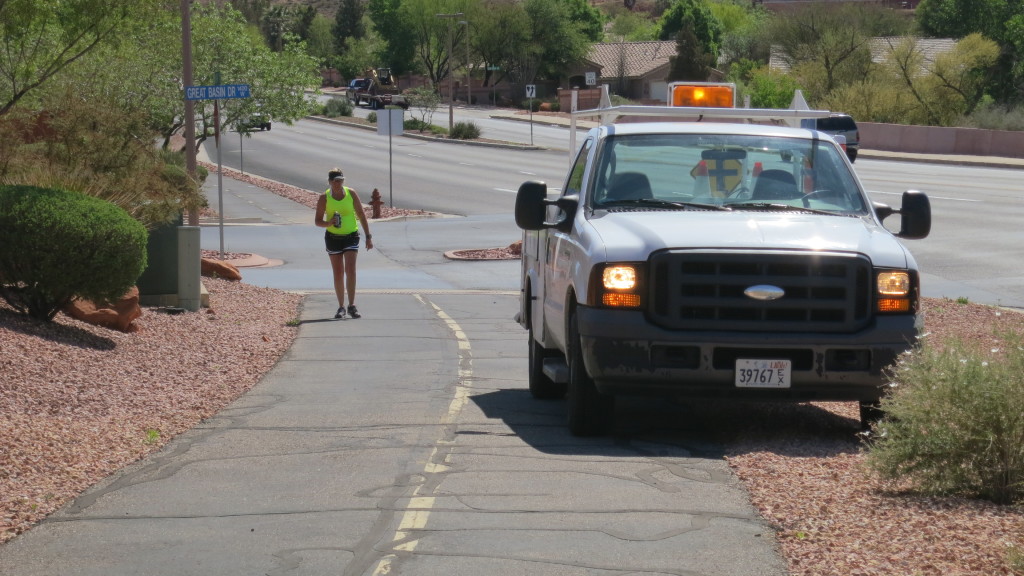 A maintenance truck parked on part of the Snow Canyon Trail. Maintenance vehicles can create obstacles for cyclists depending on how much of the trail they occupy. St. George, Utah, April 13, 2016 | Photo by Tim Tabor, St. George News 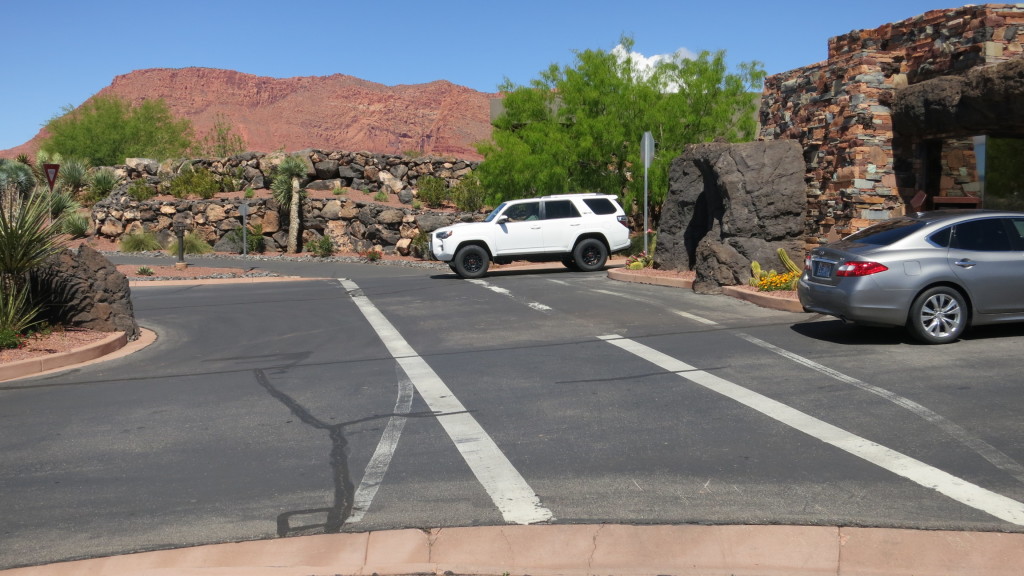 A crossing with poor visibility at the intersection of a residential development entrance and the Snow Canyon Trail. These potentially dangerous intersections are one reason why a cyclist might elect to ride on the road instead of the multiuse trail. St. George, Utah, April 13, 2016 | Photo by Tim Tabor, St. George News

St. George News Road Respect column is developed with the Southern Utah Bicycle Alliance, a nonprofit advocacy organization devoted to making cycling safe and convenient for everyone who rides a bike. Opinions stated are those of the columnist and may not be representative of St. George News.

Kristine Crandall is an outdoor writer and hiking and naturalist guide who takes frequent recreational bike rides around her Ivins neighborhood. Her first-ever visit to Washington County was while on a cycling tour through the Southwest. Over the past several years, she has written opinion columns and wildlife articles for The Spectrum. St. George News Road Respect column is developed with the Southern Utah Bicycle Alliance, a nonprofit advocacy organization devoted to making cycling safe and convenient for everyone who rides a bike. Vist the SUBA website here: http://southernutahbicyclealliance.org/