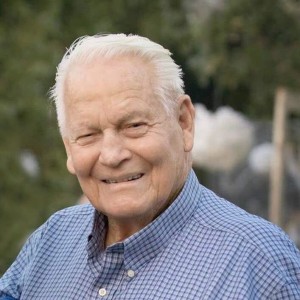 He was a lifelong resident of St. George Utah and a Dixie College graduate. With our nation in the midst of WW II Stafford enlisted in the Army and served in the Air Corp in the Pacific Theatre.  After his honorable discharge he returned to Dixie College where he met the beautiful Roene Turner from Washington, Utah who would become the love of his life. They were sealed in the St. George Temple on June 3, 1947 by his father, President Harold Stafford Snow.  He was a First Lt. in the Utah National Guard and served honorably with the 213th Field Artillery during the Korean War.

Farming was his love especially working with his son’s.  He was also a letter carrier for thirty-three years with the US Postal Service.  He felt it an honor to serve the residents on his daily route.

He was an active member of the LDS church and a lifelong member of his beloved Fourth Ward.  He served faithfully in many callings.  It was a privilege for Staff and Roene to serve together as missionaries in the St. George Historical Sites Mission.  Dad served twenty-five years as an ordinance worker in the St. George Temple, the last sixteen years as a sealer.

He loved his “Snow’s Quittin Time” home in Pine Valley, spending time with family, and the Christmas season.  He will be fondly remembered as an honest, hardworking, genuine man of integrity. A devoted, loving husband and father.

He was preceded in death by his parents, a sister Afton Everett and brother Walter.  He is survived by his wife Roene, children, Kenneth (Shirla) Snow, Russell (Amber)Snow, Scott (Pamela) Snow, Linda (Monty) Humphries and Lori Ann (Cameron) Moore, twenty-one grandchildren and twenty-five great grandchildren who loved their “GGPa” and he loved them.

Friends and family are invited to sign Staff’s online guestbook.