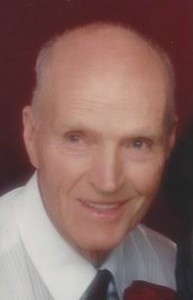 Quinn Chamberlain, devoted husband, father, loving grandfather passed away Tuesday, March 29, 2016, in Cedar City, Utah, surrounded by his family as they lovingly cared for him. Quinn will be remembered as an extremely kind, gentle and humble man.

Quinn was born July 20, 1921, to Hans and Mercy Chamberlain in Orderville, Utah. He had a happy childhood spent working in the family grocery store, but he especially loved to take care of the animals and the vegetable garden. One of his early jobs was running the movie projector for the town theater, which earned him a silver dollar every night. He broke and loved to ride horses as a young boy, and in later years told wonderful stories about these times. While in high school, he played tennis, winning state competitions.

He graduated from Valley High School then attended Dixie College, playing trumpet in the Dixie Band. After the attack on Pearl Harbor he could see what was in store for the young men of the country, so he took the pilot training classes offered and received a private pilot license under the Civilian Private Pilot Training Program. He received an associate in science on May 22, 1942. He loved to fly and wanted to be a pilot in the service but chose to enlist in the Navy. He served for 2 ½ years on a hospital ship in areas including Guadalcanal and the Solomon Islands. Upon his honorable release from the U.S. Navy, he enrolled in college again.

While back at Dixie College, he met the love of his life, Sylvia Jones, and courted her for a year before proposing marriage. They were married September 23, 1947 in the St. George Temple and have been happily married for 69 years. They had four children: Ryan, Madelyn, Ferl and Curtis.

After their marriage, they moved to Salt Lake City to attend the University of Utah. Quinn graduated with a B.S. degree in business and accounting. He had a career in accounting at U.S. Steel in Cedar City, Provo, and Lander Wyoming. He retired after 33 years and took up farming at the family farm in Toquerville and Berry Springs. He loved the outdoors, especially fishing, hunting and camping. He took pride in his garden and yard and shared his bounty with everyone. He loved to pitch horseshoes and won many competitions. 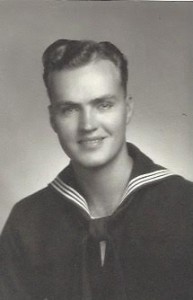 Throughout the years, Quinn was very faithful in his church callings and honored his priesthood fully. He was a scout leader for many years, and served as ward clerk to six different bishops, about 17 years consistently. Quinn’s love of the Lord showed in the way he lived his life and respected everyone he met. He has left his family an example of gratitude, humility and what it means to truly be a disciple of Christ.

There existed a special love and respect between Quinn and his grandchildren. Four great-grandchildren have been named for him and many have sent him cards they painted and drew for him. Even though he was a quiet man, Quinn had a wonderful sense of humor, which he shared with us up to the end.

Quinn was preceded in death by his parents Hans and Mercy and four of his siblings: LaVell, Rena, VerNell and Ken. He is survived by his wife, Sylvia, sister Ramona, his children Ryan Quinn (Karen) Chamberlain, Madelyn (Larry) Liston, Clarence Ferl (Tina) Chamberlain, and Curtis Hans (Ava) Chamberlain; 17 grandchildren and 39 great-grandchildren.

Online condolences can be sent to www.sumortuary.com.