The Zion Lions are back for the 2017 season. | File photo by Robert Hoppie

As the season sets to begin this Saturday (Lions vs. Brigham Sting, 7 p.m. at the Dixie Sunbowl), Zion looks to purge that championship loss from its memory.

“We had a good run, going 11-0, but that loss in the championship left a bitter taste in our mouths,” Lions head coach and owner Dale Stott said. “That stung, for sure, but we’ve got a renewed desire to go and win.”

Many of the same pieces are available from last season, though they may fit in different spots for the 2016 season.

“Misi Tupe is returning, but not at quarterback,” Stott said. “He will play some at quarterback, but because he is the (coaching) at Snow College now, he won’t be available during the week to practice with us. He’ll fill in at other spots. He will be a menace on the defensive side of the ball at linebacker for us.”

Josh Ford, who played as a receiver and kick returner last season, will take over at QB for the Lions. The speedy Ford carries his big frame (6-foot-4, 220-pounds) well and also has a great arm.

But with Ford moving to QB, that creates a hole at wideout.

“Kaipo Hurtt will be out wide for us,” Stott said. “He’s very fast and has great hands.”

Bailey Glass will step in as the slot receiver. Glass is a smaller receiver who features excellent speed and sticky fingers.

Dillon Bischoff, who played at Dixie State, will also play receiver and handle the placekicking duties for the Lions.

Other new additions to the team include 6-9, 340-pound left tackle Patrick Ah You and speedy safety Jacoby Shepherd, who played for the St. Louis Rams in the NFL as well as a decade of work in the CFL.

Brandon “Smashmouth” Thompson will move to tight end along with returnee Jordan Loo, who caught a TD pass in that championship game.

Running back Rimo Mapu, who missed most of the season with an injury last year, is back, along with Sione Tapuosi.

Another newcomer for Zion is Kamuela Alisa, who played running back at Dixie State. He’ll move to linebacker for the Lions, joining Tupe, Doug Roberts, Tui Tuiasasopo and Matt Feula at that position.

Matt Mitchell is another interesting player who can play both sides of the ball and will be used at receiver and linebacker.

Vince Feula, who now coaches at BYU, will still play for the Lions, anchoring the defensive line. Another coach is Matt Loo, who helped the Snow Canyon Warriors for years. He will help coach the defense for Zion and will also play, which is quite a feat considering his age (52).

The Lions currently have eight regular-season games scheduled, including this Saturday’s home contest against the Brigham Sting (7 p.m. at the St. George Sunbowl). The RMFL playoffs are in June. 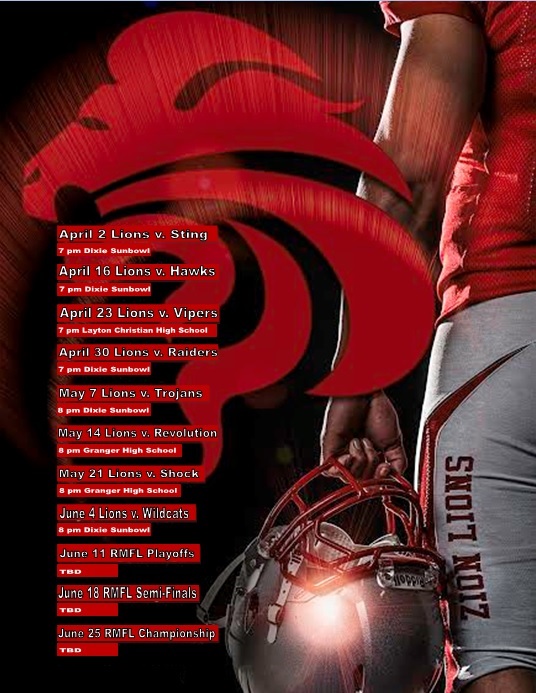 “I like the set-up this year,” Stott said. “We have nine teams in the Southern Division, three in Vegas, five in Salt lake and us, so no more trips to Idaho or Montana. I think it will be very competitive and there will be much more parity.”

After a bye Apr. 9, Zion hosts the Vegas Hawks Apr. 16 and then will play its first road game Apr. 23 at the Davis Vipers.

A rematch of the RMFL title game between the Lions and the Revolution is scheduled for May 14 in Northern Utah. The playoffs begin Jun. 11.