NEW YORK CITY – Despite a strong second half and three players scoring in double digits, No. 2 seed BYU basketball’s season ended after falling 72-70 to No. 1 Valparaiso in the semifinals of the National Invitational Tournament at Madison Square Garden Tuesday night.

Cougar senior guard Chase Fischer had his 3-point shot attempt from about 28-feet out blocked as time expired to help the Crusaders hold on for the win.

BYU ends the 2015-16 season with a 26-11 record (13-5 West Coast Conference), while Valparaiso improves to 30-6 (16-2 Horizon League) while advancing to the NIT finals against the winner of San Diego State and George Washington. The two teams combined for 38 turnovers, with the Cougars tallying 18. BYU was held to 38 percent shooting to Valparaiso’s 43 percent. 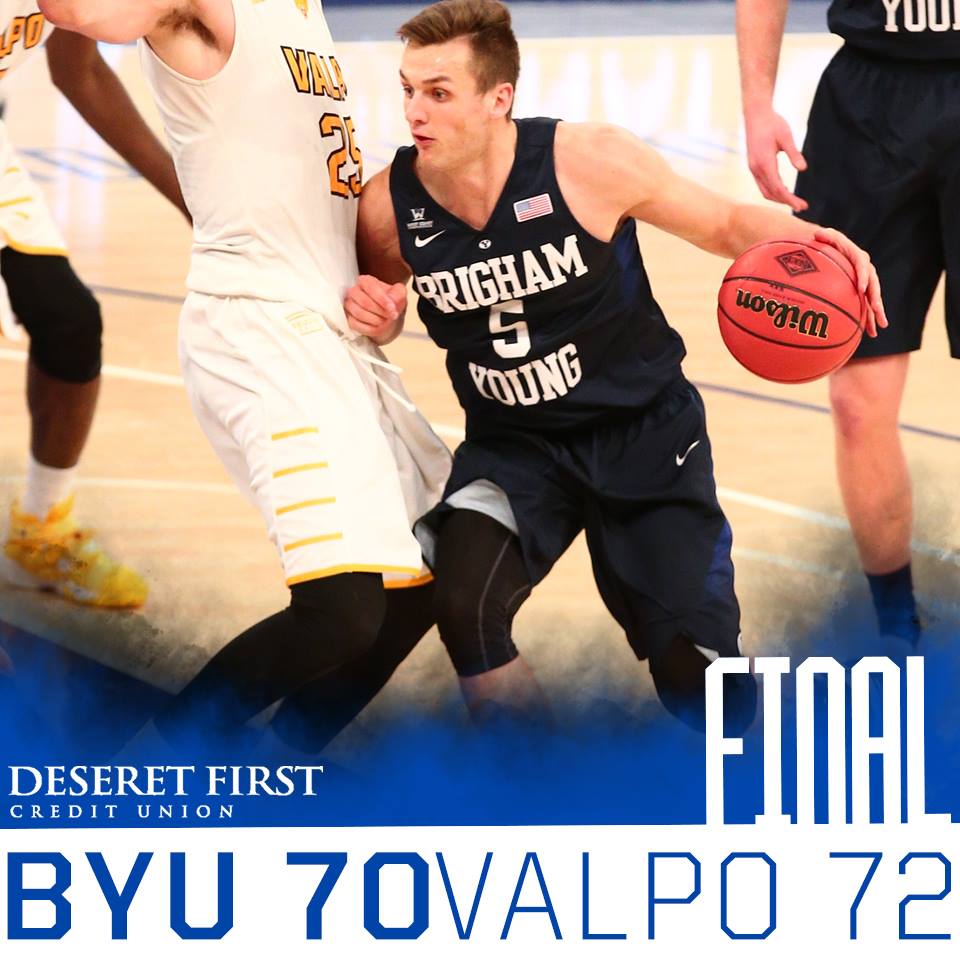 In the last game of his college career, Kyle Collinsworth led all scorers with 20 points along with five assists and five rebounds. Nick Emery chipped in 18 points to go with seven rebounds and two blocks. Fischer had 16 points in the loss, 11 of which came in the second half.

Two BYU turnovers gave Valparaiso the early 4-0 lead at the 18:39 mark in the first half. Fischer got the Cougars on the board with a 3-pointer, but the offense for both teams struggled to get going.

After five minutes without a field goal, Jordan Chatman drilled a 3 to cut into Valparaiso’s lead, 13-8. Collinsworth drove for another basket, making it 15-10 with 11:12 left in the first half.

BYU came to life behind the arc as Zac Seljaas and Emery connected from deep. Emery’s trey came after he stole the ball and broke away for the pull-up 3 with 7:51 on the clock, cutting the lead down to five, 23-18. However, the Crusaders hit back-to-back threes to push their lead back up to 29-18.

Valparaiso pushed its lead up to 14 before Collinsworth and Fischer scored a pair apiece to get within 10 points, 34-24, with 3:56 to go in the half. With the Cougars struggling to get stops, the Crusaders maintained a double-digit lead for the rest of the half.

Emery hit his second 3-pointer with 42 seconds until the break, but BYU was still down 44-30 at halftime. The Cougars and the Crusaders had 12 and 13 turnovers, respectively, in the first half. BYU was held to 36 percent shooting to 52 percent for Valparaiso.

At the start of the second half, Emery hit a 3 in the Cougars’ first possession to make it 46-33. An offensive board and a putback layup from Collinsworth sparked BYU on an 11-2 run. Fischer nailed a 3-pointer at the 14:13 mark to cap the run, putting the Cougars within four, 50-46.

Three turnovers in three possessions allowed the Crusaders to push their lead back up to 54-46. Corbin Kaufusi’s 3-point play got BYU within three, then a pair of buckets from Fischer made it a two-point game, 57-55, with 7:09 to play. It was the closest the game had been since Valparaiso led 2-0 at the start of the game.

Collinsworth capped a 7-0 run with a three-point play to give BYU the lead for the first time, 64-63, at the 4:26 mark. After the Crusaders took back the lead, Collinsworth found Kyle Davis for the basket and the 68-67 lead with just 1:18 to play. Valparaiso then scored the next four points on a free throw and a 3 with 20 seconds remaining for the 71-68 lead.

With seven seconds left, Fischer made a layup to make it 71-70. However, Valparaiso was able to hold on to win 72-70 with some tough defense to stop the potential game-winner from Fischer.