Craig Hammer, Washington County School District executive director of of secondary education, addressed the Washington City Council about the project that will take place on a 60-acre parcel of land located on the south side of 4200 South at the intersection 20 East, st between 3430 East and Medallion Drive.

The school district is continually keeping an eye on growth in the county, projecting where new schools may be needed. One of those areas is Washington Fields and the surrounding community.

“We’ve got to have a little lead time,” Hammer said. “We can’t build a middle school or high school in six months. It’s a two- to three-year project.”

Crimson Middle School will share the same design as the three-story Dixie Middle School in St. George. A design of the high school wasn’t displayed during the council meeting; however, Hammer said bids for the construction of the high school are anticipated to be sent out by late summer or early fall. Construction bids for the middle school are slated go out in April and awarded in May, he said.

The two schools aren’t the only ones the school district has going up in Washington City. Construction has already begun on Majestic Elementary School on Washington Fields Road, Hammer said.

Funding for the new schools and related facilities comes from a $185 million bond passed by voters in 2013. As to the costs of each type of school, Hammer said the school district figured on $70 million for the high school, $30 million for the middle school, and $8 million-$10 million for an elementary school.

The school district has met with residents in the area and is doing what it can to be a “good neighbor,” Hammer said.

During the council meeting, a number of Washington Fields residents living near the future site of the new schools expressed their concerns about traffic impacts on 4200 South, a road that many children use to reach nearby Crimson View Elementary.

Some residents said they feel heavy equipment on the road during the construction phase — as well as drivers to and from the new schools — would pose a potential threat.

“Particularly during the construction phase, there’s going to be a lot of traffic using that road at the same time our children are going to and from school,” one man told the council.

There were also concerns about a main access route into the school campus via 20 East, which cuts through the Treasure Valley Road neighborhood located to the north of the new schools. Again, safety of the children in the neighborhood on 20 East during construction and as a result of regular student traffic afterward was brought up by residents.

Residents asked the City Council if it could get the school district to have construction crews and resulting traffic somehow moved away from 20 East before it becomes an issue.

Other concerns involved students parking their cars along the streets. Residents made requests for road signs indicating no parking during school hours and also potential enforcement of some kind.

However, the point was raised that traffic in the area will likely increase regardless of the schools as communities in Washington Fields, Little Valley and the area around the Mall Drive Bridge continue to grow. One sign of this growth is the recent opening of a Lin’s Fresh Market on East Mall Drive that St. George Mayor Jon Pike said will likely serve students and faculty of the incoming schools.

“It’s not that we build (the schools) and they come,” Hammer said in regards to the continuing growth of the area. “They come and we try to catch up.”

In addition to the incoming elementary, middle school and high schools, a new charter school called St. George Academy is also situated in the Washington Fields area and set to open in the fall.

Ed. Note: The original address of the news schools’ location was posted in error has been corrected. 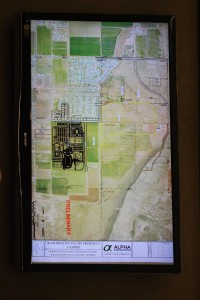