LAS VEGAS — BYU expected a rout. Instead, the Cougars got a tense showdown with Santa Clara Saturday in the quarterfinals of the West Coast Conference Tournament. BYU eventually prevailed 72-60, but it wasn’t easy.

“We got off to a good start and nice lead early in the game,” BYU coach Dave Rose said. “(But) they did a great job of changing their game plan from the last two times we played them.”

The Cougars beat the Broncos by 36 and 34 points in two meetings this season, but it was easy to tell that this time was going to be different between BYU and Santa Clara. 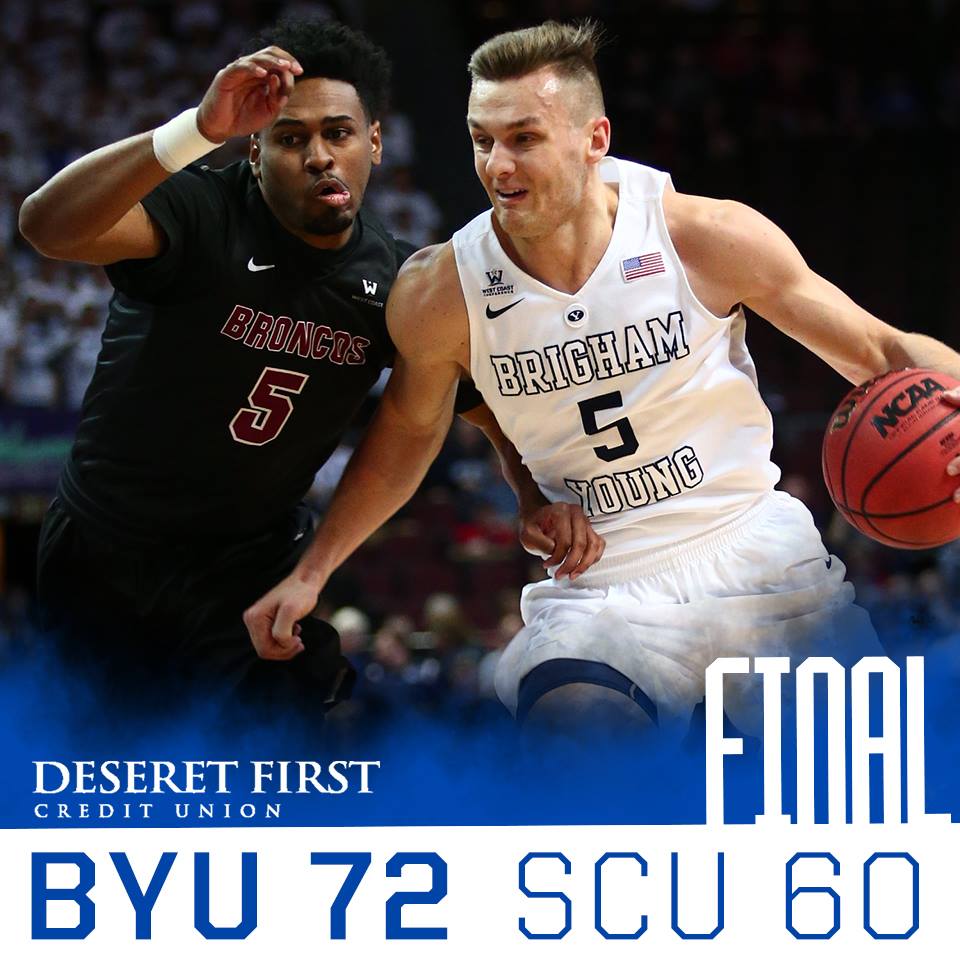 Like two previous meetings between the two West Coast Conference teams, the Cougars jumped out to a big early lead at 26-9 after 3-pointers by Zac Seljaas and Nick Emery. The 17-point bulge, with just over eight minutes to go in the first half, seemed to foreshadow what was going to be another BYU blowout.

But unlike the previous two meetings, Santa Clara didn’t fold. Instead, the Broncos went on their own run, outscoring BYU 14-3 over the next seven minutes to pull within 29-23. A couple of 3-pointers just before half gave the Cougars a 35-25 lead at intermission.

Several times over the next 10 minutes of game time Santa Clara had the ball down by one or two with the opportunity to take the lead, but SCU never could take that next step. Perhaps the best opportunity came with 5:40 left. A Brownridge trey had brought the Broncos close again and Henrik Jadersten had a wide open look at a 3-pointer with SCU trailing 56-54. The shot rimmed out and BYU closed the game on a 16-6 run to finally put the Broncos away.

“It was very intense,” Seljaas said. “We had to stay calm and stay patient on offense. We had to rely on what we had been doing all season and being able to play our game.”

Emery led five BYU players in double figures with 15 points, though he fouled out with a couple of minutes left. Kyle Collinsworth had 13 points, nine rebounds and six assists. Seljaas came off the bench to score 12, making 3 of 6 3-pointers. BYU shot 8 for 21 from deep (38.1 percent).

“I really believe that our execution late in this game on both ends, winning possessions on the offensive and defensive ends allowed us to win the game,” Rose said. “We went for a four or five minute period where we couldn’t make a free throw. We’ve been in that position before and haven’t finished the game like we finished it today and that’s what makes me happy.”

Brownridge was a one-man show for the Broncos, scoring 30 of his team’s 60 points. KJ Freeagin chipped in nine points and had five rebounds. Santa Clara outrebounded BYU 39-37.

The Cougars, 23-9, will play in Monday’s WCC semifinals with a match-up against tonight’s Gonzaga-Portland winner at the Orleans Arena.

The Broncos finish the season with an 11-20 record.