ST. GEORGE – Two juveniles were charged with arson Wednesday following an investigation into a shed fire at a middle school in St. George that fire officials called “very suspicious.” 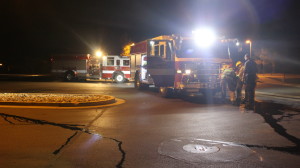 The original incident took place Tuesday around 8:15 p.m. when crews from the St. George Fire Department responded to a structure fire at Pine View Middle School at 2145 E. 130 North. Firefighters found a shed by the school’s shop building engulfed in flames. The fire was quickly put out, but the shed and its contents were a total loss.

Investigators said the fire was “very suspicious” because there were no ignition sources stored inside the shed.

They were subsequently located by Schimbeck Wednesday. Officials would not disclose the boy’s ages.

“They’ve been dealt with and charged with arson and their parents contacted,” Schimbeck said.

As to why the two boys started the fire, Schimbeck said there didn’t appear to be much of a motive behind their actions other than it being their version of having fun. They were lighting fires, but didn’t appear to have the specific intent to burn anything down.

“They were just out – idle kids with time on their hands and they used it unwisely,” the officer said.

During the investigation Tuesday night, firefighters took photos of a cluster of trees across the parking lot from the burned down shed. A part of a tree and the ground in front of it also showed signs of having been exposed to flames at some point. However, the fire that caused the scorch marks had occurred during a separate incident.

“That was from a previous fire that happened over the winter break,” Schimbeck said. “I was going to ask the kids about that fire during an interview, and one of them told me before I got to that question (and said) that they were the ones that caused that fire.”

The incident during the winter break involved a portable toilet catching fire and burning pine cones by the trees.

The names of the suspects were not released due to their status as juveniles.