SAN FRANCISCO — Five days ago, Nick Emery couldn’t throw it in the ocean from the beach and BYU was stunned at home by the Pacific Tigers.

But Thursday night in the Sobrato Center on the campus of the University of San Francisco, Emery practically couldn’t miss. The freshman from Alpine made 10 of 12 3-pointers and scored a BYU freshman record 37 points in the Cougars 114-89 runaway over the USF Dons.

Making his 21st start in 25 games, Emery shook off his 5 for 15 night against Pacific (including 0 for 6 from deep) by dishing out five assists and hitting his first five treys in the first half. He also made three free throws after being fouled by USF’s Uche Ofoegbu on a deep ball attempt.

Emery’s 37 points set the new single-game freshman scoring record previously held by Danny Ainge, who had 36 in a game his freshman season. Emery also tied Chase Fischer’s school record for 3s in a game with 10.

BYU’s full offensive arsenal was on display, with the Cougars making 17 three-pointers in the game.

Six Cougars scored in double figures. Chase Fischer added 22 while Kyle Collinsworth chipped in with 17 to go along with eight assists. Kyle Davis (12), Jordan Chatman (11) and Corbin Kaufusi (10) also hit double figures for BYU, which improved to 18-8 overall and 8-5 in the WCC. 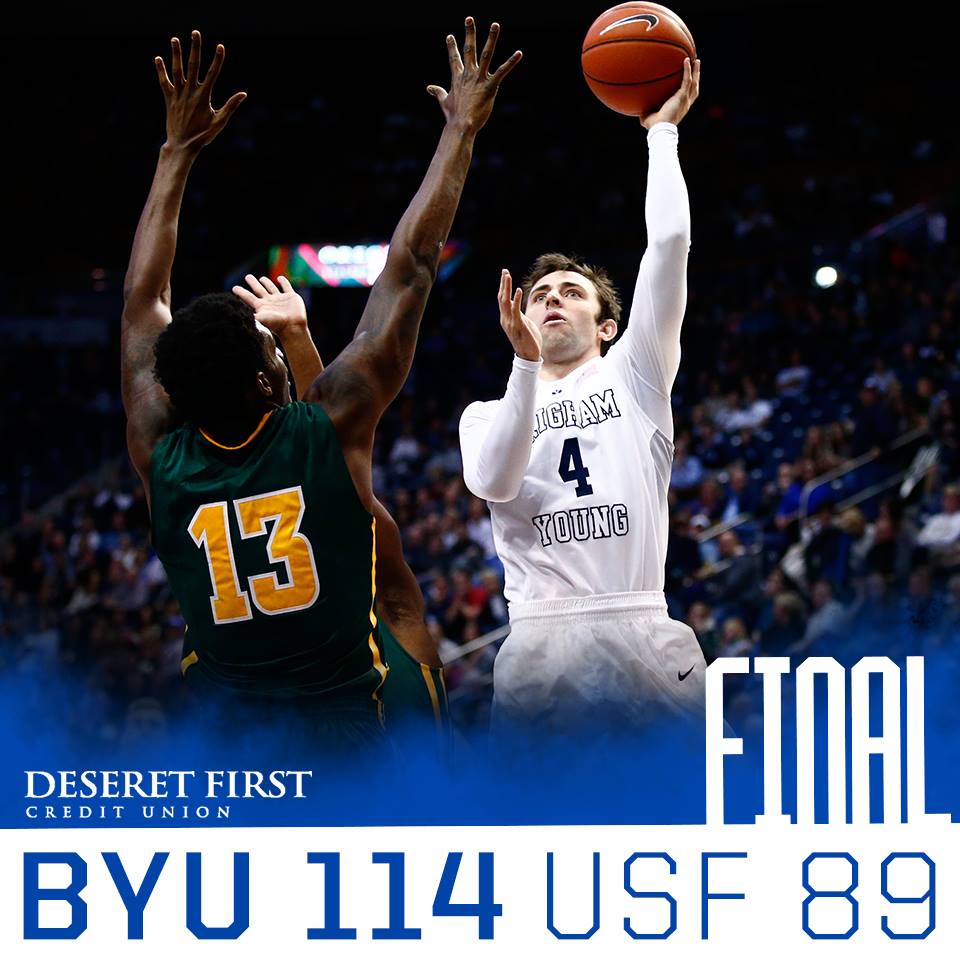 Devin Watson led all USF scorers with 29 points, Tim Derksen finished with 25 and Ronnie Boyce added 15. No other Don player managed to score more than 5 points on the night.

The Cougars shot 57.6 percent from the field for the game, including a staggering 63.0 percent from long distance, where BYU made 17 of 27 of their 3-point attempts. In two games against USF this season, BYU has made 32 3-pointers.

BYU, the WCC’s highest-scoring team, made nine of their 17 three-pointers over the first 20 minutes and opened up a 58-39 lead at the break.

“Defensively, we did a poor job obviously in eliminating their catch and shoots,” said USF head coach Rex Walters. “You want to seize the pressure and the moment in a big game like tonight and we just didn’t do it. They had guys who believed in their ability and purpose tonight and it showed in the final score.

“We weren’t ready for this moment and it’s a hard pill to swallow.”

BYU hit 100 points for the second time this season on a Davis a free throw with six minutes left in the game, leading the Dons by 22.

With less than four minutes to go, Chatman hit another three to bring his point total to a career-high 11. The Cougars and Dons went back and forth to bring the score to 111-88 with 2:25 left in the game.

At 1:50 Emery hit his 10th three to tie Fischer’s BYU record for threes in a game and set the single-game freshman scoring record with 37 points, breaking Danny Ainge’s 36 set on Dec. 3, 1977. Emery was taken out of the game after a standing ovation and the Cougars finished the game 114-89.

BYU will continue on the road for the next two games, taking on Santa Clara Saturday afternoon at 1 p.m. PST in the Leavey Event Center. The game will be televised live on BYUtv, TWC Sports Network, ROOT Rocky Mountain/Northwest and CSN California and broadcast live on the Cougar IMG Sports Network.