ST. GEORGE — Utah could become the second state in the nation to raise the smoking age to 21, as Utah lawmakers review a record number of proposed bills over the next five weeks.

For the third straight year, Rep. Kraig Powell, R-Heber City, is proposing raising the legal age to buy and use tobacco products and electronic cigarettes from 19 to 21. Critics have stalled the bill in years past by arguing anyone over the age of 18 should be allowed the freedom to smoke.

The approach is gaining traction across the country after a 2015 study from the Institute of Medicine in Washington, D.C., estimated such laws would discourage smoking at an age when many people first get addicted. As many as 95 percent of adult smokers report starting to smoke before they turn 21 years old.

That study concluded that raising the minimum age to 21 would help delay when young adults and adolescents start using tobacco. The study predicts that if all states immediately raised the minimum age to 21, there would be a 12 percent decrease in tobacco use among today’s teenagers by the time they become adults. 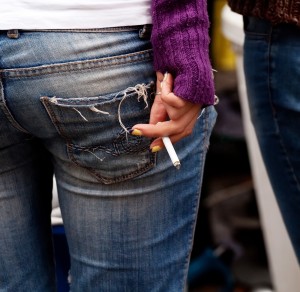 Additionally, any individual under 21 who buys or attempts to buy, accepts or has tobacco in any form in their possession is guilty of a class C misdemeanor and subject to a minimum fine or penalty of $60 and may be subject to participation in a court-approved tobacco education program, which may include a participation fee.

On Jan. 1, Hawaii became the first state to raise the smoking age to 21 while also incorporating e-cigarettes into its smoke-free laws, meaning such products will be banned in areas where smoking and traditional tobacco use is already prohibited.

“We are proud to once again be at the forefront of the nation in tobacco prevention and control,” Virginia Pressler, the state’s director of health, said in a statement.

Although Hawaii is the first to implement such a law on a statewide level, similar measures have been introduced in at least eight other states and the District of Columbia. Federal lawmakers have also proposed a nationwide smoking age of 21.

However, it has mostly been cities and municipalities so far that have been pushing the issue to raise age restrictions on tobacco. More than 100 U.S. cities have raised the smoking age to 21. New York City raised the legal age for selling tobacco products and e-cigs to 21 in August 2014, Boston’s new law will go into effect this month, and Cleveland, Ohio, voted last month in favor of raising the minimum age for cigarettes sales from 18 to 21.

Dr. Huy Nguyen, interim executive director of the Boston Public Health Commission, said smoking is still the leading cause of preventable deaths in the United States.

Smoking continues to cause more deaths “than HIV, illegal drug use, alcohol use, motor vehicle accidents and firearm-related incidents combined,’’ Nguyen said in a statement. “Reducing the number of young people who ever start smoking is the single most important thing we can (do) to promote long-term health.’’

When the Utah Senate defeated the measure in 2014, one of the reasons senators said they couldn’t support the bill was due to the loss of tobacco tax revenue to the state.

Through provisions of this bill, approximately 5,300 individuals could forgo paying tax on tobacco and related products for a tax savings of about $635 per person per year or about $3.24 million to $3.36 million total.

According to the Institute of Medicine:

The public health impact of raising the MLA for tobacco products depends on the degree to which local and state governments change their policies. These decisions will depend on each state’s or locality’s balance between personal interests and the privacy of young adults to make their own choices versus society’s legitimate concerns about protecting public health.

Farmers market in Ancestor Square to reopen with new procedures