COMMENTARY — The Runnin’ Utes are off and running again with a home sweep of Cal and Stanford to push their current conference-leading win streak to five.

Just like the Jack Nicholson 1980 thriller, Utah is Shining! Do you remember the scene in which Nicholson hacks his way through the bedroom door with an axe and announces, “Wendy, I’m home?” Now picture that scene with Jakob Poeltl and the rest of the Runnin’ Utes stepping through the door and into the Huntsman Center announcing, “Ute fans, we’re home.” Even better, fast forward to when Nicholson chops through the bathroom door. Now pretend that the door represents the Pac-12 and Poeltl is serving notice on the rest of the conference, “Here’s Jakob!” 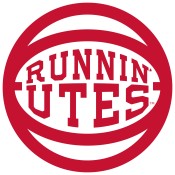 Inconsistency earlier in the season had been somewhat of a horror film for Utah fans, including a big win over Duke in Madison Square Garden, followed by a disappointing loss to Stanford in what was a very winnable game. However, the Runnin’ Utes have found their stride with multiple happy endings in recent games to give their fans something to smile about.

“I don’t know how good we can be or what we’re going to be defined as, that’s something you look back on,” Utah coach Larry Krystkowiak said. “I just encourage my guys to not have any regrets. We focus on a daily basis, come in and work really hard and try to get better every day. We need to be playing our best basketball at this time or toward the end of the season.”

We are now down to single digits in conference games left — nine — and March Madness is right around the corner. It’s not too early to start thinking (OK, truthfully speaking, we are really speculating) about what might be come tournament time. Can the Runnin’ Utes replicate their appearance in the Sweet Sixteen a season ago? Where will Utah be seeded in the Big Dance? I guess we should start with whether the Runnin’ Utes are even expected to be invited to the ball.

Although Utah last fell out of the rankings back in week nine of the season, they may soon find themselves back on the national radar. The Runnin’ Utes are already checking in at No. 14 in both the NCAA RPI and the ESPN RPI rankings.

The real fun comes in following projected brackets. CBS Sports is currently projecting Utah as a 5 seed, playing Chattanooga. Fox Sports  has the Runnin’ Utes as a 6 seed playing Monmouth. ESPN is a little less optimistic, but still has Utah as an 8 seed playing Gonzaga (but Utah’s position should be upgraded in today’s upcoming update).

Am I getting ahead of myself? Yes, but isn’t that half the fun of investing yourself in any sports team, thinking (dreaming) about what that team might accomplish? Most parents engage in similar mental exercises about their young children, so why can’t sports fan indulge as well?

Getting back to the present and reality, the Runnin’ Utes play the Beavers on Thursday, tipping off at 9 pm MT on ESPN2, followed by a Sunday matchup with the Ducks which will also be televised on ESPN2 at 2 pm MT.

“Each of us have our own challenges and obstacles (in the Pac-12),” Krystkowiak said. “I’ve never been a leaderboard kind of guy, or watcher, more of just trying to focus on what we can control.”

The Red Rocks also have two meets this week, hosting Arizona on The Hill tonight at 6 pm MT, and then traveling to Los Angeles for a Saturday matinee against UCLA at 2 pm MT.

Unfortunately, Utah has lost Kari Lee with a season-ending tear to her left Achilles tendon suffered in practice last week. Lee was a three-time All-American and NCAA event finalist last year as a freshman, and the team’s only all-arounder in the first three meets this season. An already young squad just got younger.

Even before Lee’s injury, significant shuffling in the line-ups had been expected, with the biggest shake up occurring in the floor exercise. While the door to Lee’s season has closed, another door has opened up additional possibilities for the other talented ladies on The Hill.

The Red Rocks also have another problem — too many fans showing up for home meets. This is a problem most teams wish they had, regardless of the sport or gender of the athletes.

Long lines of fans waiting for the doors of the Huntsman Center to open have been common sites at home meets. Tonight’s home meet is expected to be another capacity crowd, including fans who were turned away from the last home meet, but given tickets to tonight’s meet as a consolation prize.

Here’s hoping the Red Rocks continue to deliver for their devoted fans at tonight’s meet, and the Runnin’ Utes can move to the head of the class with big road wins over Oregon State and Oregon this week.

Bleeding Red is a sports column written by Dwayne Vance. The opinions expressed do not necessarily represent those of St. George News.

Woman accidentally writes $21,000 check, man thanks the lord and meets the law after depositing money