PROVO – Five players scored in double figures to propel the BYU men’s basketball team to an 88-77 win over Pepperdine on Saturday night at the Marriott Center.

Kyle Collinsworth led all scorers with 24 points, making it his 31st career double-double and ninth this season with 10 assists. He added four rebounds to pass Michael Smith, becoming the school’s career leader in rebounding with 923.

“Its surreal,” Collinsworth said. “I remember my freshman year I got put in and started at the four. I started rebounding like crazy. Every game I was rebounding like crazy. I had a couple 15-point games. I rebounded great in high school, too, I’ve just always done that. It’s remarkable to see it add up. I’m the best point guard rebounder in the country and it’s just how I’ve always played. No one’s going to rebound better than me from my position. I try to do that day in and day out for my team.” 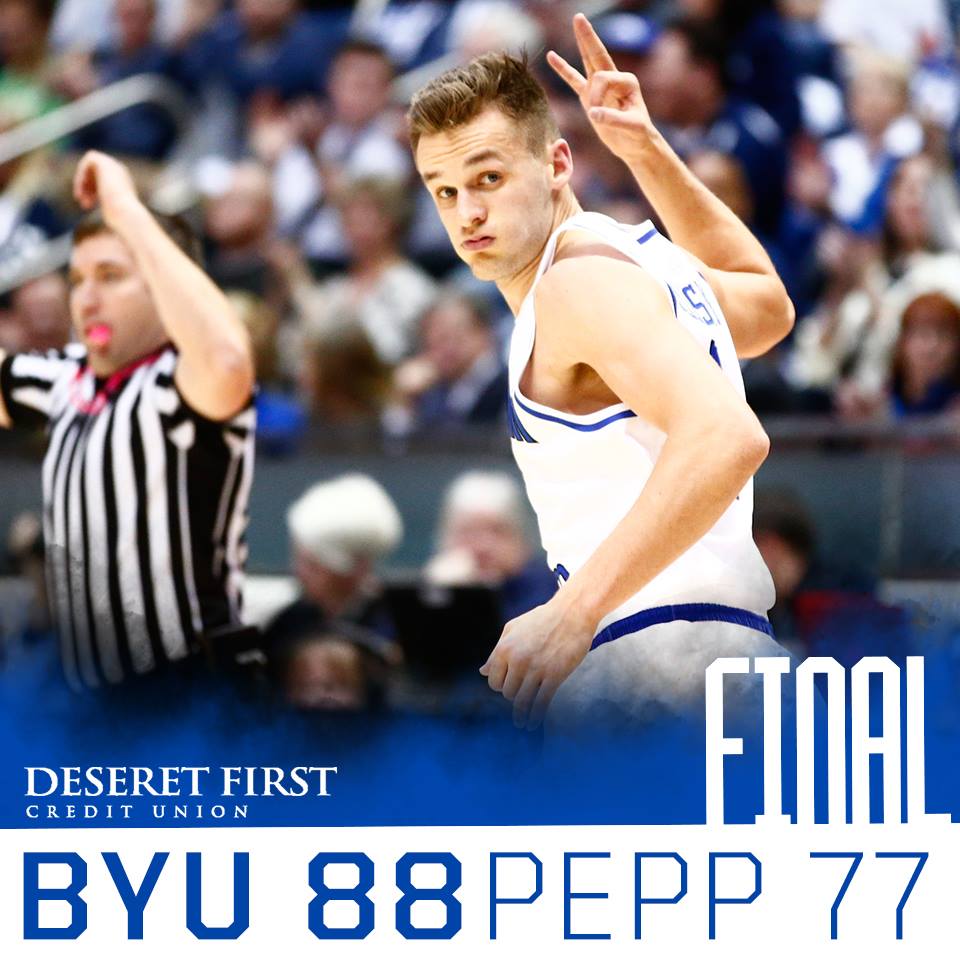 “I thought it was a really hard-fought game,” BYU coach Dave Rose said. “Two teams that were kind of desperate for a win. I think we were fortunate to turn around last Saturday night and get on the good end and make a few more plays. It’s a good matchup. I thought that our team responded really well to the things we needed to do better.”

Collinsworth said rebounding was one of the big keys in the win against the Waves.

“Rebounding was huge,” he said. “We got stops down the stretch when we needed to. We got a lot of stops in a row. We came up with some big plays. We just made plays when we needed to and at their place we didn’t, so that was the difference.”

Pepperdine jumped out to a 10-4 lead in the first three minutes before Collinsworth knocked down a 3-pointer from the corner, accounting for all 7 of BYU’s points.

Emery tied it up at 17-17 with a pull-up triple with 13:54 to go in the first half. Kaufusi gave BYU its first lead of the game with two made free throws on the next possession.

Hartsock scored nine straight for the Cougars, going 3 of 3 from behind the arc, to build up a 34-25 lead with 8:27 left in the first half.

BYU led by as many as 13 points, but the Waves kept fighting back and the Cougars took a 53-45 advantage into the break. Collinsworth led all scorers with 13 at halftime while Emery added 10. Both teams shot it well in the first half with BYU shooting 62.5 percent from the field and Pepperdine coming in at 58.1 percent.

Pepperdine cut the lead down to 2 points to start the second half, but a steal and fast-break dunk from Collinsworth put the lead back to 5 at the 18:04 mark.

The Cougars put together a quick 6-0 run to push the lead to 64-56, aided by three consecutive turnovers from the Waves with 13:34 remaining in the game. BYU used another 7-0 run two minutes later to make it 71-58.

Despite trimming the deficit to 8 points again, Pepperdine didn’t have an answer for Fischer, who scored 5 straight points for an 80-67 lead with 6:19 to play.

BYU controlled the rest of the way and held off the Waves 88-77 down the stretch.

The Cougars continue their string of home games on Thursday, Feb. 4 at 7 p.m. MST as they host first-place Saint Mary’s. The game will be televised on BYUtv and can be streamed on BYUtv.org. The game can be heard on the Cougar IMG Sports Network.

Signing day 2020: See where Region 9 athletes are heading to college