PROVO – Five players scored in double-figures as BYU cruised to an 87-62 victory over Loyola Marymount in West Coast Conference action Thursday night at the Marriott Center.

“There were times out there that I thought we were really good, especially at sharing the ball,” BYU head coach Dave Rose said. “We played a lot of guys that haven’t played a lot of minutes in the past week or two, so it was good to get them out there and see them produce.”​

Kyle Davis led all Cougars with 19 points on 9 of 13 shooting for his 20th game in double figures this season. Kyle Collinsworth had 11 points as he made three field goals on five attempts to go along with five rebounds and a game-high eight assists. Chase Fischer added 17 points, six rebounds and four assists, including 4 of 8 from 3-point land, while Nick Emery and Corbin Kaufusi also reached double-figures with 10 and 12 points, respectively. 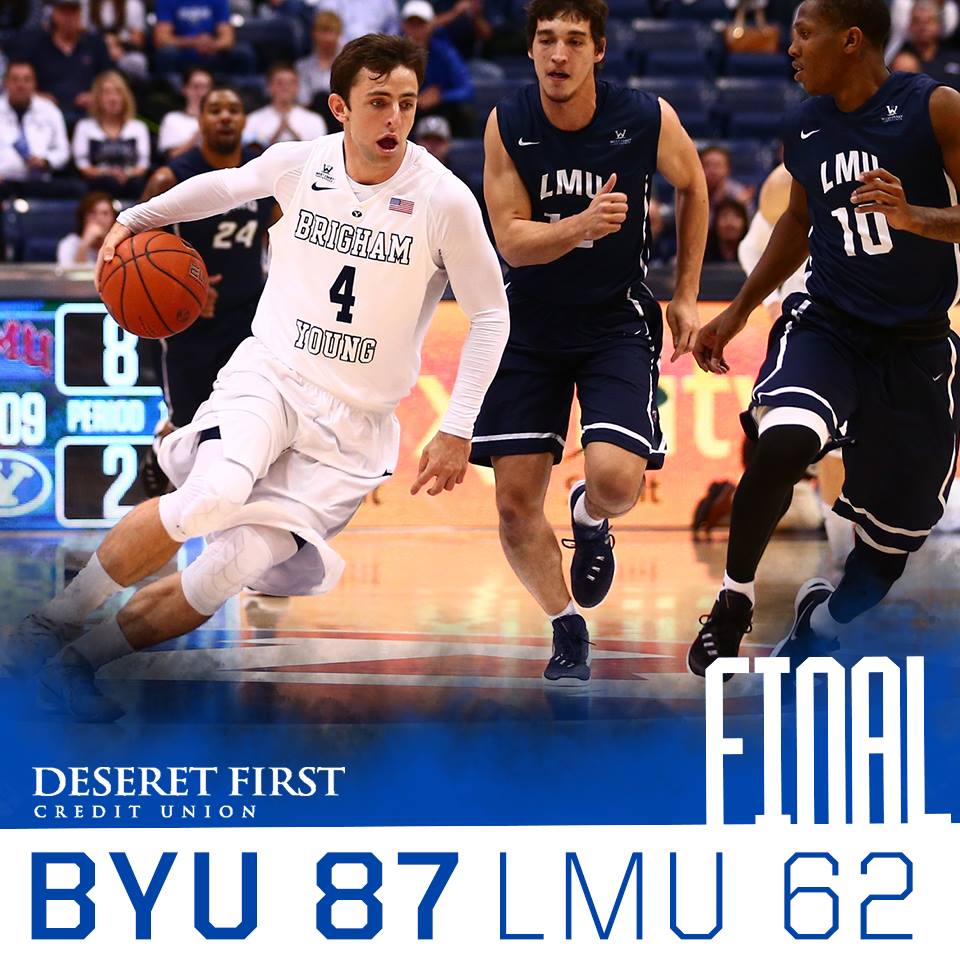 The game got off to a slow start as the Cougars found themselves in an early 8-0 hole. They responded, cutting the deficit to 3 at 10-7 at the 14:30 media timeout.

Following the break, the two teams exchanged baskets and missed shots with LMU and BYU both going 1 of 5 from the field heading into the next media timeout at 10:30 left in the half.

After the break, Jakob Hartsock busted the Cougars out of their slump with a 3 from the right side, tying the game at 15 apiece. Emery followed with a 3 from the left before Zac Seljaas hit a wide-open Kaufusi at the basket on the next BYU possession to make it 8 points in a row for a 20-15 Cougar lead.

The Lions then ended a five-minute scoring drought with an alley-oop to Adom Jacko with 7:50 left in the half. A couple of possessions later, Collinsworth converted a 3-point play after a two-handed dunk in the lane for a 22-17 tally with 7:14 left in the first.

BYU ended the half on a 16-7 run as LMU missed 9 of its final 11 shots in the first half. Davis and Collinsworth led the Cougars in scoring with 10 and 9 points, respectively, powering BYU to a 38-24 halftime score.

Fischer got things going in the second half with back-to-back 3-pointers as the Cougars hit four of their first six shots for a 48-32 lead with 16:20 on the clock.

Both teams continued their improved second-half shooting with BYU maintaining a double-digit lead with a 60-42 advantage at the 11:35 mark.

Later in the second half, Kaufusi infused energy into the crowd with a dunk, a blocked shot and a 3-point play to push the Cougar lead to 70-50 with 7:52 remaining.

The Cougars continue their string of home games looking to avenge last week’s loss as they host Pepperdine on Saturday at 8 p.m. MST. The game will be broadcast on ESPN2 and can be streamed on WatchESPN.com. Cougar fans can also listen to the game on the Cougar IMG Sports Network.