ST. GEORGE – Shortly after New Year’s Day, blue cans started to appear at homes across the county in preparation of the BluCan curbside recycling program slated to begin the week of Jan. 31.

“If you’ve had a blue can show up in your front yard in the last few days, it’s not a late Christmas present,” St. George Mayor Jon Pike said Thursday during a City Council meeting, “it’s your recycle can.”

St. George, along with LaVerkin, Leeds, Hurricane, Ivins, Rockville, Santa Clara, Springdale, Toquerville and Washington City, have each signed on to the BluCan Recycling program last year as a means to prolong the life of the county’s landfill.

Emphasizing this intent is the name of program. The “BLU” part of BluCan stands for “Better Landfill Utilization.”

“Saving landfill space will make a significant impact for the area,” officials with the Washington County Solid Waste District said previously. “While the current landfill has many years of use remaining, the value of reducing the current stream of waste to lengthen its life and preserve land space benefits future generations.”

Prior to adoption and implementation of the program, St. George and several other cities gave residents the opportunity to opt-out of the program last fall.

The opt-out period ran through September and October, with cities involved sending notices out with utility bills and others means in order to inform the public. Residents who didn’t choose to opt-out were automatically added to the program.

The Washington County Solid Waste District reported in November that 85 percent of St. George’s population was signed into the program. Participation in other cities that allowed an opt-out option ranged from 49 percent to 78 percent. A total of 87 percent of county residents enrolled in the recycling program, according to the solid waste district.

Overall, 41,944 homes across the county have already received, or will yet receive, the BluCan.

“Basically all of the cans are being delivered now,” Pike said, adding that pick up will begin the weeks of Jan. 31 and Feb. 7.

Pick up of recyclables will be the same day as garbage pick up, though every other week, Pike said.

Smaller cities will start recycling service on the week of Jan. 31. Due to their size, parts of St. George, Hurricane and Washington City will start service the week of Feb. 7. Service in Ivins will also start that week.

The 2016 schedule is provided below, courtesy of BluCan.org. Click the image to enlarge. 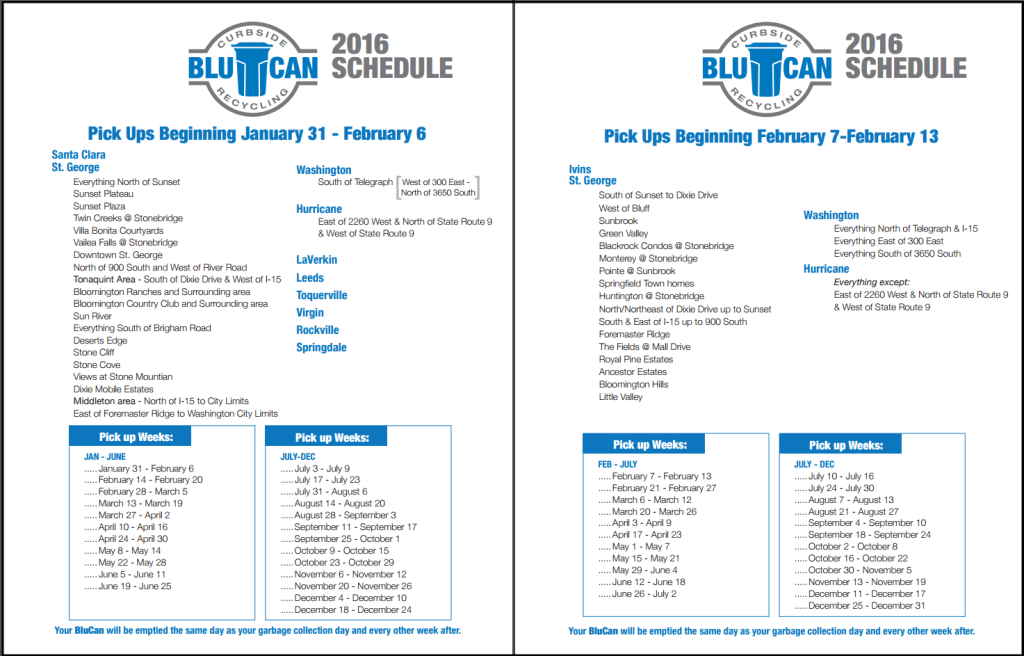 Due to the large percentage of participation, the monthly charge for the recycling program in St. George will be $3.12, Pike said. It is down from the original $4 that was anticipated in case participation number were lower.

“We have a chance for only $3.12 a month to contribute to lengthening the life of our landfill,” Pike said. “That’s really the main thing we’re going to accomplish here, even though it may not benefit you or I. It might (benefit) our kids or grandkids. I think it’s worth it.”

BluCan allows residents to deposit paper, plastic, cardboard and metal waste into their own BluCan, a can that will be similar to their current garbage can. Glass is currently excluded from the list of acceptable recyclables.