ST. GEORGE — On the 43rd anniversary of Roe v. Wade, protesters gathered outside the St. George offices of Planned Parenthood to express their opposition to legalized abortion. Those who attended the protest said every life was sacred and society has an obligation to protect those most innocent of lives.

“I’m here to support right to life,” Marcella Wintz said. “Everybody has a right to life. Especially the unborn. They’re the most innocent in our society and we have an obligation that we should support and protect them from murder. It is murder. I know people don’t like to hear that, but it is murder.”

Society gets upset when inner-city children are shot, but few give time to think about the unborn, Wintz said. The procedures for abortion are horrific, she said, but no one says anything because they do not see the faces of the fetuses.

Wintz said she was there as a voice for the St. George Catholic Church. As a follower of her faith, Wintz said she had a moral obligation to protect the lives of the unborn. No one is speaking for them, she said.

Activists are standing up for all manner of different causes, Wintz said, but few are defending the rights of the fetuses.

“Everybody’s standing up for ‘Black Lives Matter,’ ‘Blue Lives Matter’ — what about the babies? Even animals have more rights,” Wintz said.

We are here to defend the defenseless, Rose Medina said. Members of the St. George Catholic church gather at Planned Parenthood every first Saturday of the month to pray peacefully, she said.

Though Wintz said 53 million abortions have taken place since the Roe v. Wade ruling, Medina said that number was closer to 56 million. Medina urged people to go to the website “Center for Medical Progress” in order to view the controversial videos that have dominated the news for some time now.

People need to see for themselves and make up their own minds (as to the validity of the videos,) Medina said.

The women who have had abortions were those whom she was thinking of as she protested, Julia Romanov said. As someone who had previously had an abortion, she said she knew firsthand the pain a woman experiences when she terminates a pregnancy.

Note: St. George News attempted to speak with the pro-choice supporters, but was unable to make contact.

In 1973, the Supreme Court issued its 7-2 decision in Roe v. Wade, finding a state law that banned abortions, except to save the life of the mother, was unconstitutional. Among other things, the court held that the state statute violated the woman’s right to privacy – at least during the first trimester of pregnancy. It further held the states have an interest and could regulate aspects of abortions during the second trimester for the protection of the mother’s health; and, in the third trimester, upon “viability” of the fetus, it could regulate or deny abortion except in cases where the mother’s health was at risk.

The law established by Roe v. Wade has been expanded and tested and is far from settled in the minds of its opponents. Today, the decision remains the subject of strident debate from advocates on both sides of the abortion issue and those in the nation’s legal community where some maintain the decision was activist and historically unfounded – or, as dissenting Justice Byron White described it, “an exercise of raw judicial power.” 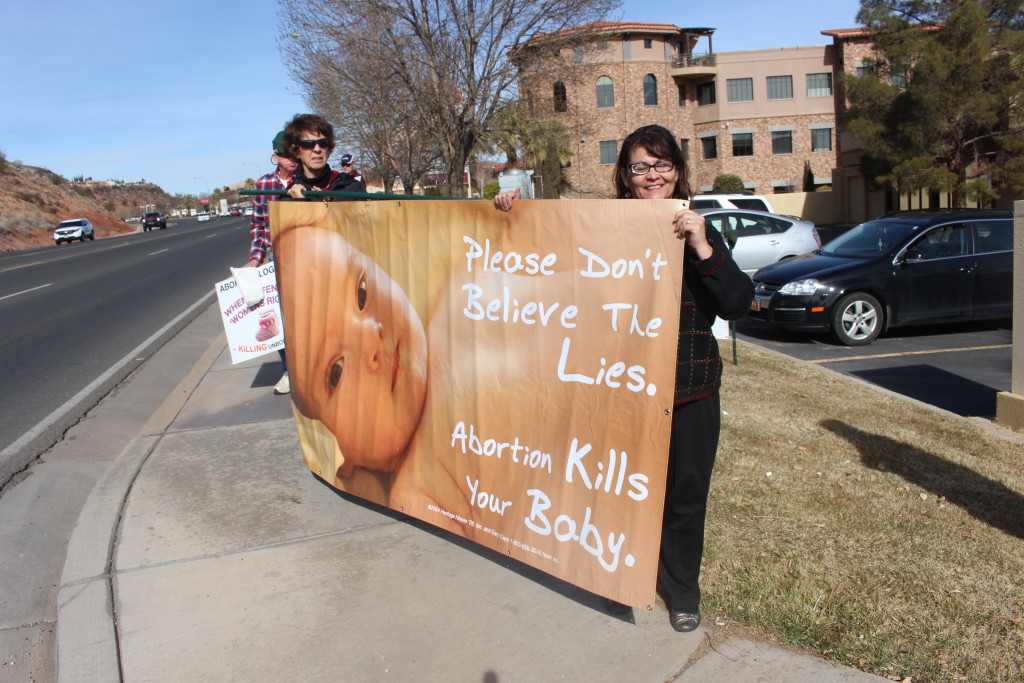 Protesters hold a pro-life banner during a demonstration in front of the St. George Planned Parenthood offices on Jan. 22, 2016 | Photo by Leanna Bergeron, St. George News 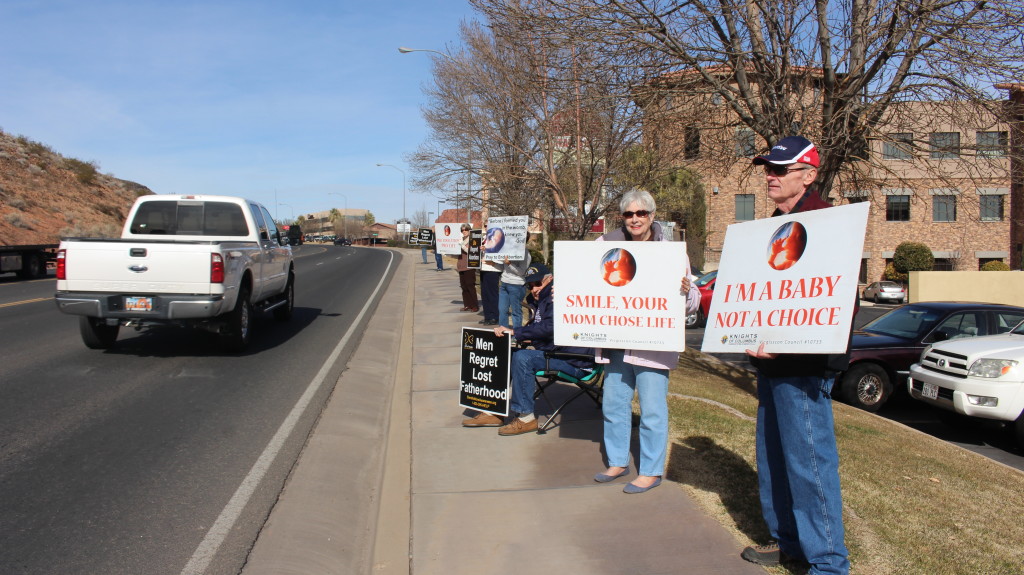 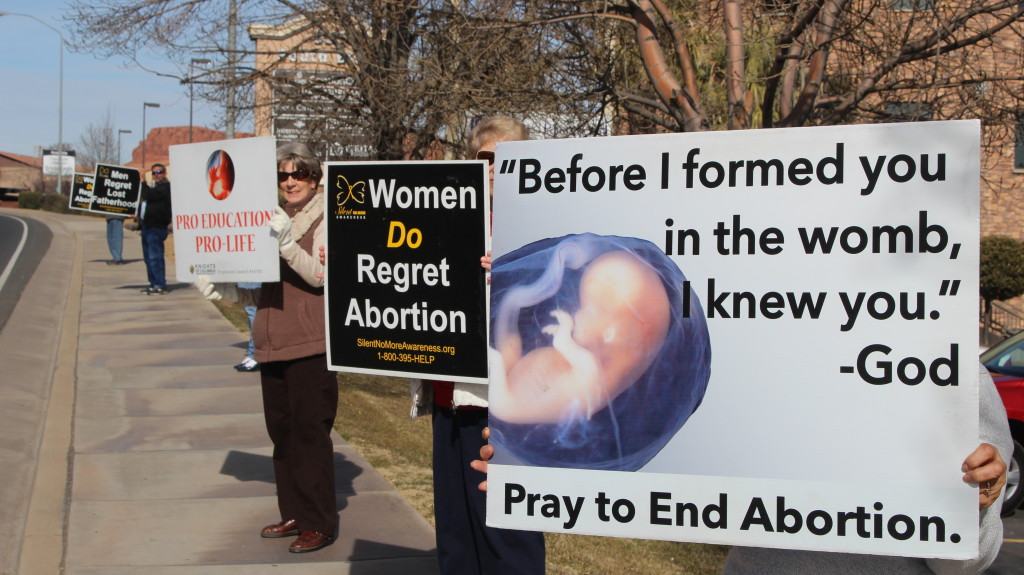 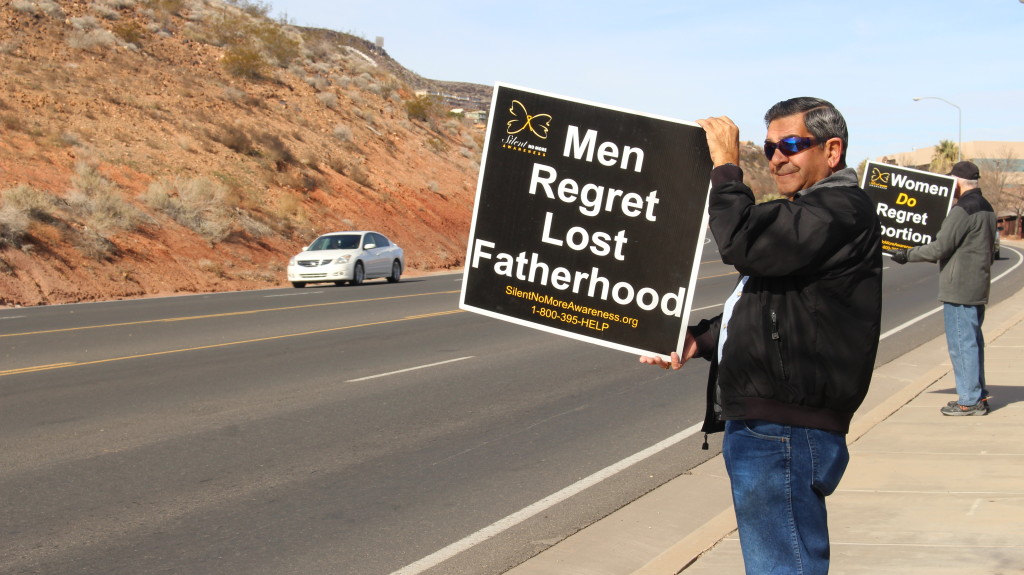 A demonstrator holds a sign in opposition to abortion during a protest at the St. George offices of Planned Parenthood in St. George, Utah on Jan. 22, 2016. | Photo by Leanna Bergeron, St. George News