SPOKANE, Wash. – For the second year in a row, BYU upset No. 25/21 Gonzaga at the McCarthey Athletic Center Thursday night, overcoming a 13-point second-half deficit to win 69-68.

The Cougars continue a four-game win streak with their victory over the Bulldogs. BYU trailed Gonzaga the majority of the game, but despite foul trouble and struggling from the 3-point line, the Cougars pulled off a victory 69-68.

Nick Emery hit a 3-pointer — his only points of the night — from 27-feet out to put the Cougars ahead 69-67 with 1:37 left in the game. It was BYU’s largest lead of the game and the shot was launched right in front of the BYU bench.

Senior Kyle Collinsworth scored a game-high 20 points – including 18 in the second half – and added five rebounds and three assists to lead BYU. Chase Fischer finished with 18 points of his own and four assists, while Kyle Davis added 12 points and 11 rebounds for his seventh double-double of the year.

“The story of the game is the effort our guys gave,” BYU head coach Dave Rose said. “Consistent effort through a lot of offensive frustration. We didn’t shoot the ball our best tonight, but defensively we were dialed in.”

The first points of the game came from a pair of Davis free throws at the 19:44 mark. The Cougars and the Bulldogs exchanged the lead nine times before Gonzaga jumped ahead 11-10 with 13:58 to go in the first half. 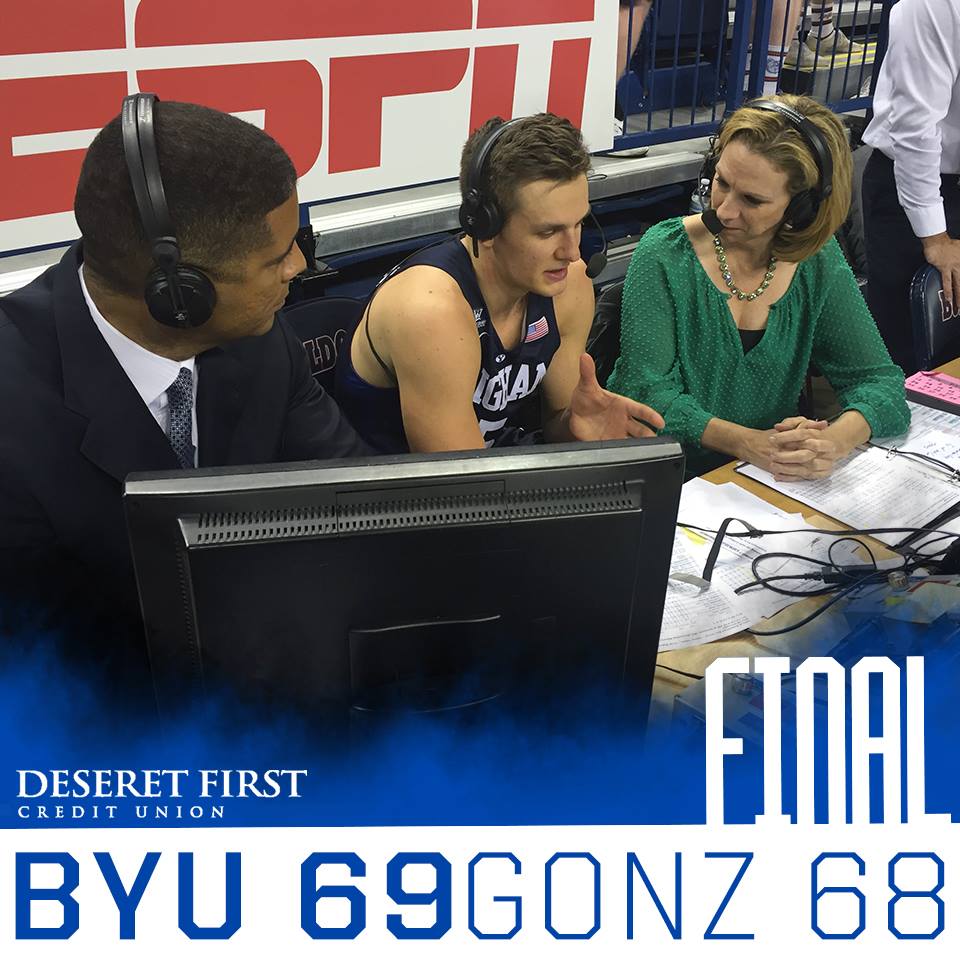 In the first 10 minutes of the game, six of seven Cougars that had seen the court scored, led by Corbin Kaufusi’s four points. Gonzaga went on an 8-0 run to take its first double digit lead at 24-14, forcing BYU to call a timeout. The Cougars were also forced to put Collinsworth on the bench after his second foul at the 8:46 mark.

With five minutes left in the half, Nate Austin left the court after taking a shot to the head, while Emery got his second foul and ended up on the bench. In the first 15 minutes, the Cougars had 15 fouls. With three of its starters out, BYU trailed Gonzaga 27-24.

Despite Collinsworth and Emery sitting out for a majority of the first half with foul trouble, Austin leaving the game injured, going 0 of 9 from three and 11 of 32 from the field and turning the ball over nine times, the Cougars only trailed the Bulldogs by four points, 36-32, going into half time.

Davis led the way in the first half with 10 points and seven rebounds, his 17th time in 18 games scoring double figure points. Gonzaga’s Kyle Wiltjer was dominant on the other end, scoring a game-high 17 points in the first half.

Gonzaga opened the second half with a 3-pointer from Wiltjer, starting a 9-2 run for the Bulldogs to extend their lead to 45-34 with 16:05 to go in the second half. Emery got his third foul and was taken out of the game.

BYU began working the board and hit the next couple baskets to bring it within striking distance of Gonzaga, 47-39, with 14:03 left in the game.

After five-straight points from the Bulldogs pushed the lead back to seven at 61-54, Collinsworth started another 8-0 BYU run with a layup. He then hit a 3 to pull the Cougars within two and Fischer completed a three-point play with 2:57 remaining to give the Cougars their first lead – 64-63 – since the 14 minute mark in the first half.

BYU and Gonzaga exchanged buckets and free throws over the next minute as Gonzaga held a 67-66 lead with 1:55 remaining. Emery re-entered the game and despite having missed his first five shots, drained a 3 to give the Cougars a 69-67 lead with 1:37 to go.

BYU and Gonzaga exchanged misses over the next 1:40 before Wiltjer drew a foul, going to the line with a chance to tie the game with eight seconds to go. He made the first and missed the second and Collinsworth secured the miss, but was called for a travel. Wiltjer had a chance to win the game but was denied as his shot was rejected by Austin, who secured the ball and the win for the Cougars.

The Cougars will stay on the road and play at Portland on Saturday, Jan. 16. Tipoff is scheduled for 3 p.m. PST and will be televised on ESPN3, Root RM/NW and CSN California and broadcast on Cougar IMG Sports Network.