PROVO – Zac Seljaas’ big night off the bench led the BYU Cougars in a 102-92 win over WCC opponent San Francisco Saturday night at the Marriott Center.

​”Obviously the ultimate goal is that we’re trying to win every game, so I’m really happy for our guys tonight” BYU head coach Dave Rose said. “I think there are things from this game that can help us get better. Tonight, we weren’t very good defensively on the point of attack. We need to improve on that. Offensively, we shot the ball really well. We’ll get some good practices in next week before we hit the road for the next four games. That will tell us lot about where we’re going to be and how the season’s going to turn out. But I’m proud of us tonight.”

Chase Fischer led all scorers with 25 points on 7 of 14 shooting, while hitting 5 of 10 from deep. Nick Emery also added 21 points, shooting .500 (3 of 6) from behind the arc. Seljaas contributed 20 points and five rebounds off the bench for the Cougars, hitting 6 of 10 from deep. Kyle Davis added 14 points of his own, registering an additional nine boards and a career-best four blocks on the night. Kyle Collinsworth led the Cougars with seven assists, while putting up 14 points, four rebounds and three steals of his own.

The Cougars got down 9-5 early after a slow shooting start with five minutes gone in the first half. After a quick timeout, BYU took a 16-13 lead on 3-pointers from Seljaas, Fischer and Emery.

After a couple quick baskets from San Francisco, a Fischer 3-point shot tied things up at 21-21 with 10 minutes to go in the half. The Dons then jumped to a 28-23 lead, but back-to-back Seljaas three pointers put the Cougars within striking distance at 31-29 at the eight-minute mark. 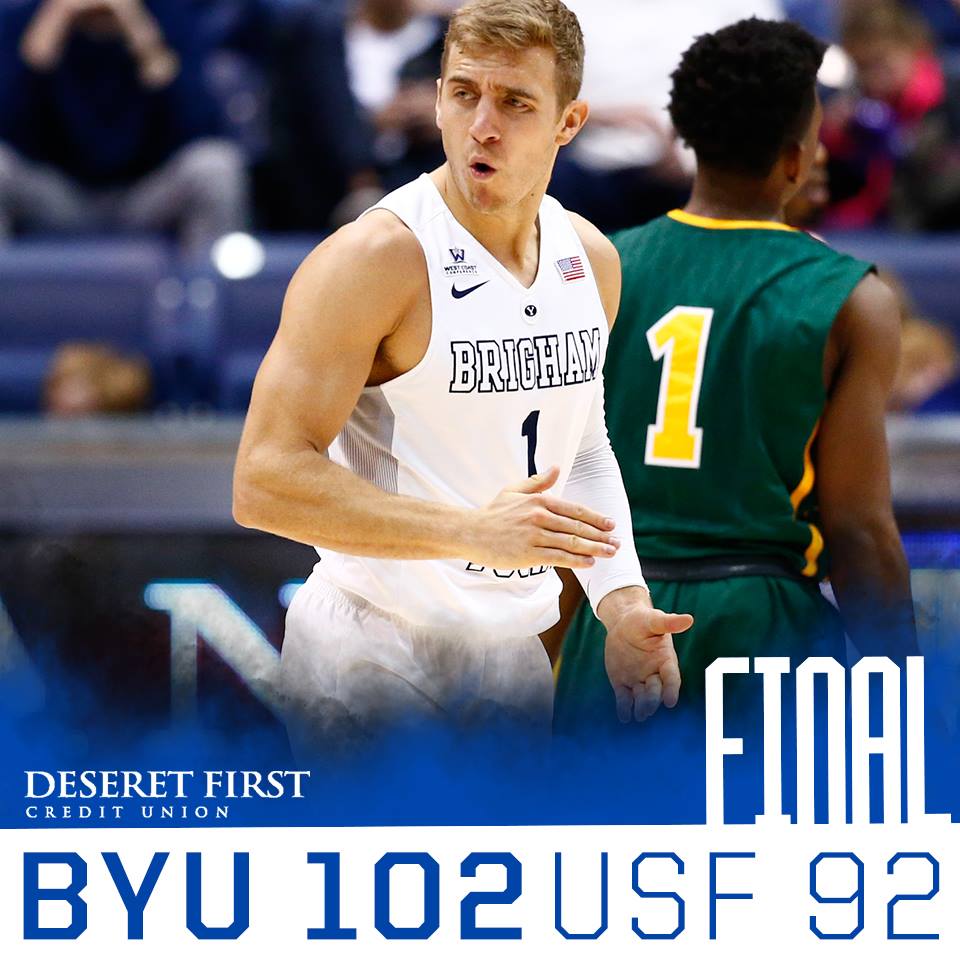 Seljaas continued his hot streak with a shot from deep, followed by a steal and made basket to bring the score to 36-35 for the Cougars with five minutes left in the first half.

Collinsworth came up with a huge steal and an emphatic dunk on the other end that put BYU up 47-44 at the two-minute mark. A Fischer two-point jumper and two free throws from Davis capped an 11-3 run for the Cougars to end the half, with the score set at 51-45.

Seljaas finished the half with 14 points on 5-7 shooting, including 4-6 from deep. Fischer also added 13 points, sinking three buckets from long range.

The Cougars and Dons exchanged baskets to start the second half, but an Emery 3-pointer followed by a Fischer layup put BYU up 62-50 with four minutes gone.

San Francisco edged closer to the Cougars, going on an 11-5 run to bring the score to 75-68 for BYU with 10 minutes left. Seljaas got the crowd back into it with another deep 3 before a San Francisco dunk set things at 78-70 for the Cougars.

A Collinsworth jumper put BYU up 88-78 with five minutes left to play. Another Emery 3-pointer extended the BYU lead to 93-80 at the four-minute mark.

The Dons tried to edge back, but four Fischer free throws in the final minute of the game sealed things, with the final score set at 102-92 for the Cougars.

BYU will take on WCC rival Gonzaga in Spokane, Washington, on Thursday, Jan. 14, at 6 p.m. PST. The game will be broadcast on ESPN2. Cougar fans can also listen to the game on the Cougar IMG Sports Network.