BOULDER, Colo. (AP) – Lorenzo Bonam scored 17 points, including a go-ahead layup with 1.1 seconds remaining, and had a pivotal steal as Utah rallied to beat Colorado 56-54 on Friday night.

Bonam drove to the basket and arched a shot over Josh Scott’s hands to help Utah (12-4, 1-2 Pac-12) overcome a nine-point deficit in the second half. Kyle Kuzma added 12 points as he was back in the lineup after hurting his tailbone on a hard fall last Sunday in a loss at California. 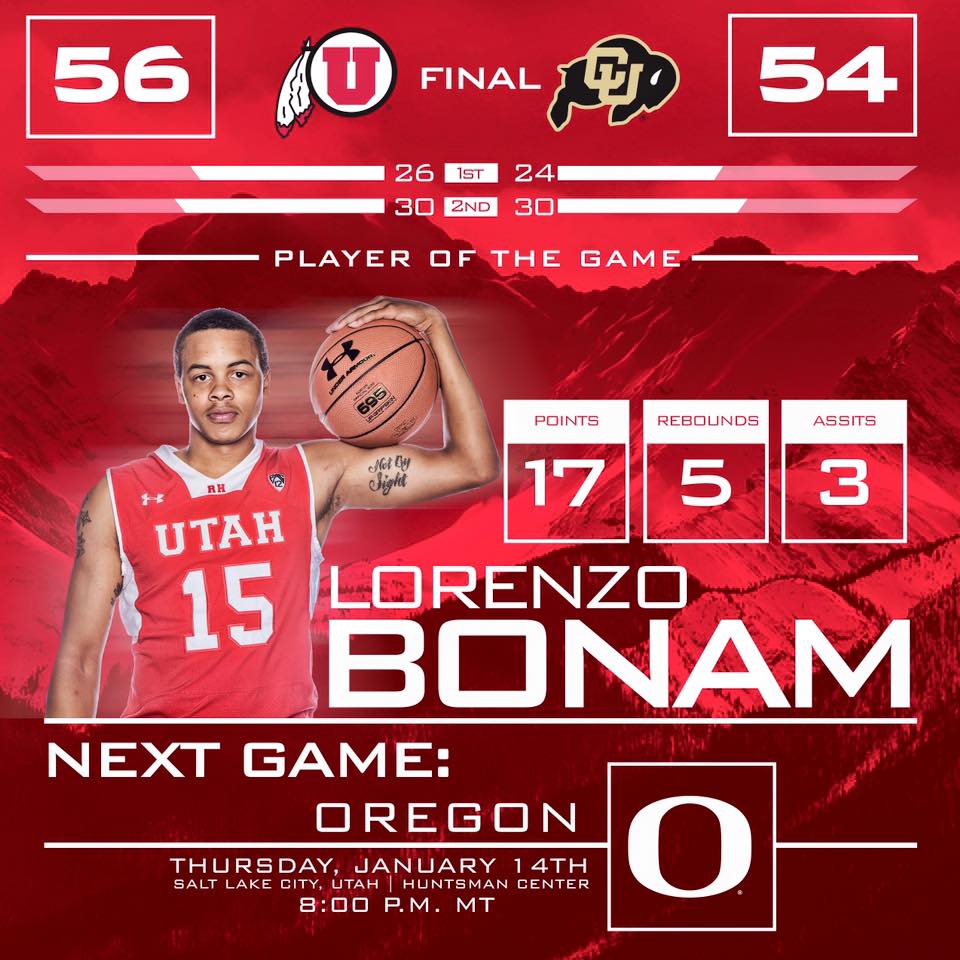 Scott posted the better numbers against Jakob Poeltl in a showdown featuring two of the top centers in the country. Scott finished with 10 points and 10 rebounds, while Poeltl had six points and 11 boards. Poeltl didn’t score his first bucket until 14:59 remaining, but he came up with a big bucket down the stretch.

It was Poeltl’s lowest points total since scoring six during a 105-58 blowout of Delaware State on Dec. 22. He played just 19 minutes in that contest.

Colorado had a nine-point lead in the second half, only to see Utah storm back. Poeltl gave the Utes a 54-52 lead on a layup with 1:39 remaining.

After King tied it on a layup, the Utes missed a long shot, but played stellar defense and got the ball back when Bonam stole a Josh Fortune pass.

Utah called timeout with 13.1 seconds remaining to set up a final play. Bonam’s number was called and he sank the basket for the Utes’ first Pac-12 win of the season.

Colorado and Utah got off to a sluggish shooting start, missing nine straight before Kuzma finally drained a jumper at 17:10. The offense didn’t improve much with the Buffaloes and Utes going 19-of-57 from the floor in the first half and committing 15 turnovers.

Poeltl had five rebounds and no points in the opening 20 minutes.

TIP-INS — Senior guard Brandon Taylor had three steals to move into a tie for ninth place in Utah history. … Junior guard Kenneth Ogbe (groin) didn’t play.Scott started his 105th game at Colorado, tying Donnie Boyce (1991-95) for fifth-most in school history. … There remains no timetable for a decision by senior guard Xavier Johnson, who’s considering whether to return this season or to redshirt after tearing his left Achilles in June.

Cedar City car burglar gets months in jail, rather than prison, after being cooperative with authorities