ST. GEORGE – In 2015, Utahns donated more volunteer hours than any other state, marking the 10th straight year Utah has been recognized as No. 1 in the nation for volunteerism. 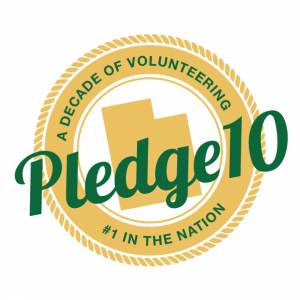 To celebrate the Corporation for National and Community Service announcement that Utah ranked first in the United States for volunteerism, Gov. Gary Herbert kicked off the 2016 Pledge10 campaign.

The campaign asks Utahns to serve 10 people, volunteer with co-workers 10 times or serve 10 hours at a charity organization in the upcoming year.

“Your long tradition of service makes Utah what it is,” Gov. Herbert said. “We are proud of our culture of caring for one another. Where government would otherwise have to step in or grow, Utah’s exceptional army of volunteers step up to fill the need.”

Utahns put in enough volunteer hours every to fill 93,000 full-time job positions, according to the Corporation for National and Community Service – that’s $4.5 billion in economic contributions.

The average Utahn donates 92 hours of service per year, which is twice the average of the No. 2 state in the nation.

“We’d like you to join us in celebrating Utah’s continued commitment to service by joining Pledge10 to volunteer beyond what you’re already doing in your community in 2016,” the Pledge 10 campaign site reads. “We want to make this our biggest and best year of service yet as we reach out to one another, do a little bit of good, and watch the world change.” 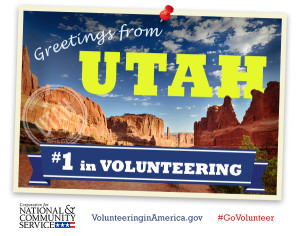 Here are some examples of ways you can Pledge10:

Volunteers are invited to share their service stories on social media, using the hashtag: #Pledge10Utah.

Utah ranked first in nation for volunteerism for 9th year