BYU finished the tournament 2-1 for a fifth-place finish and improved to 9-4 on the season.

Chase Fischer followed up his record day in the previous game to lead all scorers with 26 points on 7 of 14 shooting from the field. Kyle Collinsworth  tied his career-best with 16 rebounds to go along with 12 points for his fifth double-double of the season and 27th of his career. He also added six assists, three steals and one block.

Zac Seljaas was a perfect 3 of 3 from the 3-point line and finished with 12 points, while Nick Emery added 11 points. Kyle Davisjust missed another double-double with 10 points and nine rebounds.

The Cougars shot 50 percent for the game and went 19 of 21 from the charity stripe for a season-best clip of 90.5 percent. BYU crashed the boards for an advantage of 41-27 over UNI and beat the Panthers in the paint 34-22. 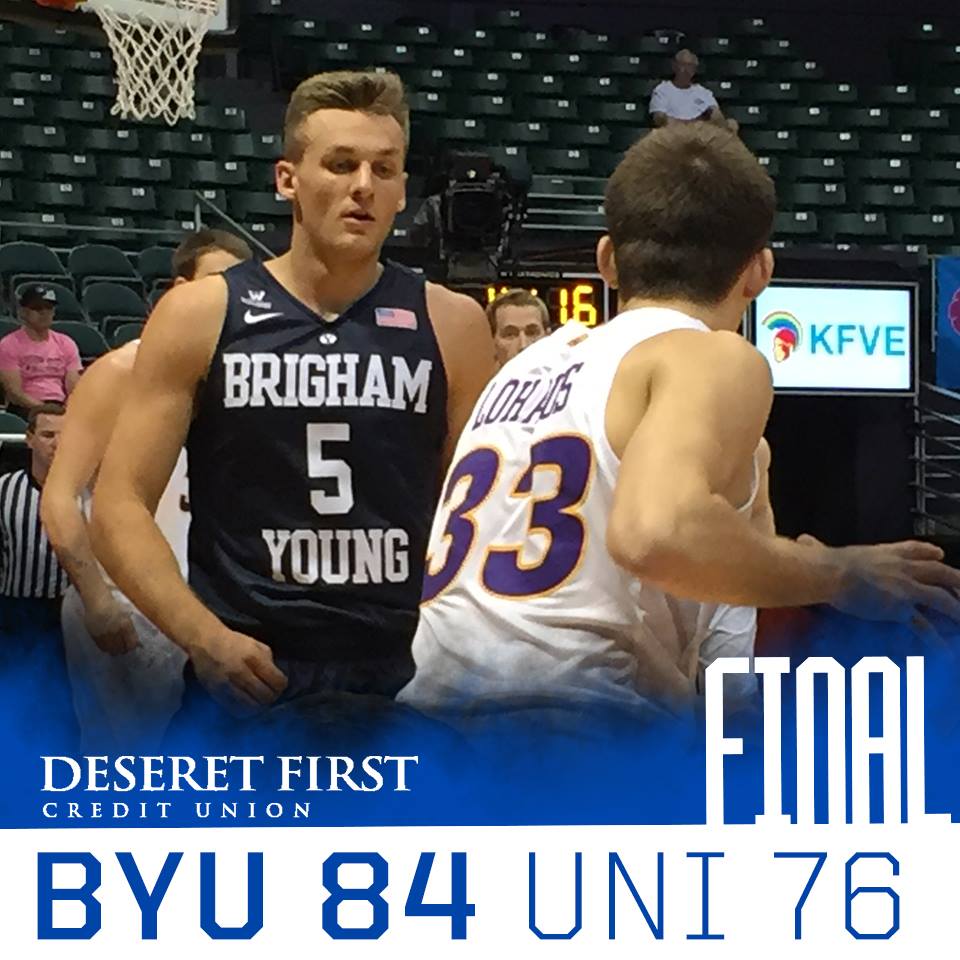 “This was really a good performance from our guys,” BYU head coach Dave Rose said. “I think when you take the last eight minutes of this game, it was a two- to three-point game and we needed to execute to win and that’s why I’m happy for my guys. We were able to execute down the stretch, we got guys to the foul line and we made every one in that 8-minute stretch.”

Tied at 12-12 in the first half, Davis hit a jumper and Fischer got his first triple of the game to start a 15-0 run for BYU.

Back-to-back 3-pointers from Sejaas and Jordan Chatman capped the Cougar run giving BYU a 27-12 lead with 7:40 to go until halftime.

UNI fought back to a single-digit deficit at 32-23 after an old-school 3-point play was completed with 3:28 left but BYU took a 38-28 lead into halftime.

The Panthers came back early in the second half, cutting the lead to just 42-39 in the first four minutes.

The Cougar lead was down to two points at 52-50 with just over 10 minutes remaining, but Emery drained a deep three from the top of the arc to give BYU a five-point edge with 10:12 to go.

UNI put together three 3-pointers in the final minute to make it 80-74 with 25 seconds to go but an attempt to make it a one-possession game came up short and Emery picked up two free throws on the other end to push the lead back to eight points and an eventual 84-76 win.

BYU opens up West Coast Conference play on the road Thursday, Dec. 31, at Saint Mary’s at 8 p.m. PT. The game will be broadcast on ESPNU and can be heard on the Cougar IMG Sports Network.

Relationship Connection: How much is too much sacrifice in marriage?