“The main key to winning this game today was that we needed to stay together and rely on each other,” BYU coach Dave Rose said. “Sometimes you get into tough spots and you want to do things yourself or all by yourself. That is what I was proud of the most. We got off to a good start, we had good energy but we stayed engaged in what we wanted to do for most of those 40 minutes. It was a good win for our team.” 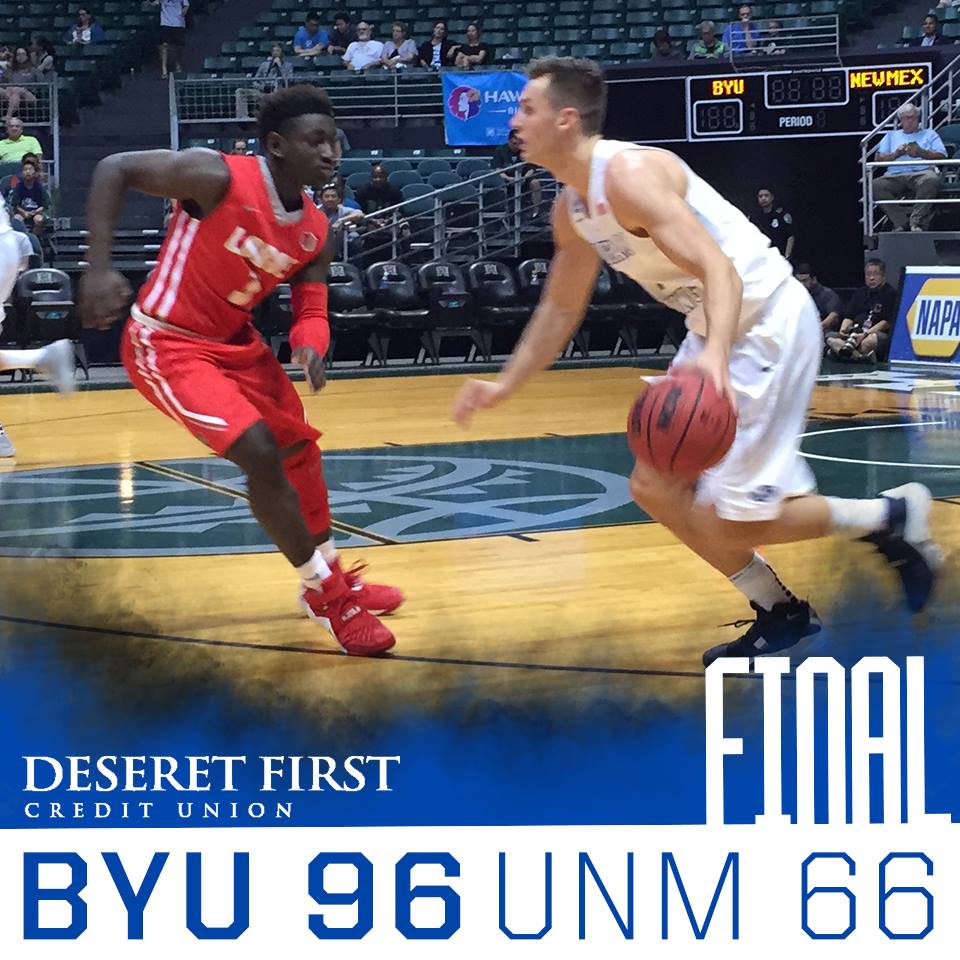 BYU (8-4) had 24 points in the paint and shot 52 percent from the floor. The team shot 57 percent from beyond the arc with 16 team 3-pointers, a new single game Diamond Head Classic record and the second-most 3s made in a game in BYU history.

After winning the tip in the first half, Sam Logwood made the first bucket for New Mexico (7-5) off a right handed layup. Fischer had BYU’s first points off a deep 3-pointer from the right side to put the Cougars up 3-2. Davis took the ball to the baseline and added a layup to extend the Cougars’ lead to three. Emery added another 3-pointer to put the Cougars up 8-4 with 17 minutes to play. Davis added a pair of free-throws and Fischer added another deep 3 to make the score 13-4.

Later on, Elijah Brown made noise for the Lobos with a deep 3-pointer but Emery responded with a three of his own to make it 21-9 for BYU. The Lobos responded with four straight points, but Fischer hit another 3 after a Collinsworth rebound to make it 24-13 with 12 minutes to play in the first half.

Fischer hit his fifth triple of the game to make it 30-19, but strong defense on New Mexico’s end brought the game within seven. Fischer showed his versatility with a layup and Davis found the basket from the baseline again to make the score 34-25 with 6:30 to play before halftime.

Back-to-back 3-pointers from New Mexico kept the Lobos hanging around, but Aytes ended the run with a layup with 50 seconds to play in the half. Fischer’s reverse layup gave the Cougars a eight-point lead, 46-38, to end the first half. He finished the first half with 19 points and five 3-pointers.

Emery and Fischer each added 3-pointers to put the Cougars up by 14 with 17 minutes to play to open the second frame. Fischer added his eighth 3-pointer a minute later, breaking the Diamond Head Classic record and giving the Cougars a 61-48 lead with 15:35 to play.

A Collinsworth layup, three converted free-throws and a Fischer layup made the score 69-49 for the Cougars with 13 miuntes to play. Aytes’ left-corner jumper kept the 20-point lead, but New Mexico’s Cullen Neal added five staight points to bring the score within 15 with 10 minutes to play. Emery converted a 3-point play and Davis found the basket from the baseline to help BYU regain its 20-point lead with nine minutes to play.

Seljaas added another trey and Fischer added his ninth triple of the game to give the Cougars a 30-point lead. The 3-pointer was Fischer’s last of the night before resting on the bench to close out the game.

The Cougars will play the winner of Washington State and UNI in the consolation bracket championship on Wednesday, Dec. 25. The game will be broadast on ESPNU and can be heard on the Cougar IMG Sports Network.