Okay, in reality there are 13 elite athletes on the Red Rocks’ roster (let’s call it a baker’s dozen). I can’t wait for their season to start after the first of the year, as they are one of the most entertaining teams to watch on The Hill, bar none. If you are still looking for a last-minute Christmas gift, pick up some season tickets to see these talented ladies in action, and then sit back, relax, and enjoy the show!

Last weekend marked Utah’s tenth bowl appearance with Kyle Whittingham at the helm (including the 2005 Fiesta Bowl in which Whittingham was the co-head coach), with the Utes posting a 9-1 record in those bowl games.

The Runnin’ Utes have already posted nine wins in eleven tries. The most recent, and impressive, was a 77-75 overtime win over Duke in Madison Square Garden in front of a national TV audience. Utah hosts Delaware State in the Huntsman Center on Tuesday, Dec. 22, which should produce win number 10.

Eight Players of the Week

Super sophomore Jakob Poeltl chose to return to college instead of turning pro after his freshman year. He was projected as a potential late first round pick last year, and is already being talked about as a lottery pick if he declares for the draft this year. While teammate Kyle Kuzma led the Runnin’ Utes with 21 points against Duke, Poeltl had 19 points, 14 rebounds and 3 blocks, even though he spent a good portion of the game on the bench in foul trouble. Poeltl may soon be joined by fellow 7-footer Jayce Johnson, a Utah recruit who will graduate from high school early (with a 4.0 GPA) and join the Runnin’ Utes in late December, with the possibility of actually suiting up and playing this season.

Utah’s football team posted six conference wins this past year (including an absolute demolition of Oregon in Eugene by a score of 62-20), to set the high-water mark for wins since Utah joined the Pac-12, and making Utah co-champion of the Pac-12 South Division (along with USC, who ended up playing in the Pac-12 Championship by virtue of a head-to-head win over Utah in the regular season).

The five turnovers created by Utah’s tough defense in the Royal Purple Las Vegas Bowl produced the five touchdowns that gave the Utes the win in the latest incarnation of the Holy War. Quite frankly, I am sick and tired of hearing BYU fans lament that the Cougars beat themselves. Let’s be clear about this, Utah beat BYU. When Kylie Fitts sacked Tanner Mangum on the third play of the game, Mangum didn’t just hand Utah the ball, the Utes ripped it out of his hands. On the Cougars’ next play from scrimmage, Mangum made a good pass for what should have been a completion, but the Utah defender made an even better play and forced the ball out of the receiver’s hands and into the air where Tevin Carter snatched it and ran it back for a touchdown. Five plays later, Ute defensive end Jason Fanaika made an athletic move to leap into the air and deflect another Mangum pass that was otherwise on target. Tevin Carter once again corralled the loose ball and returned the

interception to the 1-yard line. Five plays later, the Utah defense collapsed the pocket around Mangum and hit him just as he was releasing the ball resulting in another pick-six, this time by Dominque Hatfield. Two plays later Lowell Lotulelei forced a fumble, and the Ute offense punched it in for another touchdown. Notwithstanding the fact that Utah’s offense would struggle for the remainder of the game, the Utes still scored three touchdowns on its first three opportunities. The bottom line is that Utah was ready to play as soon as the game started and manhandled BYU in the first quarter to the point that the Cougars were never able to fully recover. If pretending that Utah didn’t beat BYU makes Cougar fans feel better, then so be it, but just remember, denial isn’t just a river in Egypt.

After a near miss for the national title last year, the Red Rocks debut at No. 4 in the gymnastics preseason poll with 2,171 total votes (just three votes shy of third place). “We feel good about our preseason national ranking,” said first-year co-head coach Tom Farden. “We lost possibly the best senior class in the nation, so this ranking shows that the coaches respect not only our returners, but also our freshman class of recruits.” The Red Rocks are also the preseason favorites to win the Pac-12.

After Week 8 of the college football season, the Utes were ranked No. 3 in the AP Poll (too bad the season didn’t end then).

Utah punter Tom Hackett claimed the Ray Guy Award as the nation’s top punter for the second consecutive year. Hackett is also only the second player in Ute history to earn unanimous consensus All-American honors (being named to the first team of all five major All-America teams; first team recognition on four of these teams produces a consensus All-American). While the football team will miss his expertise with the pigskin on the field of play, I will truly miss his wit and humor off the field (he is going to make an NFL team very, very happy — literally — next year).

And Another Win Over BYU!

The real beauty is the double entendre behind this phrase, as the Runnin’ Utes recently beat the Cougars on the hardwood floor 83-75 (and the game was not as close as the score might otherwise suggest), as well as on the gridiron in the Royal Purple Las Vegas Bowl. In fact, I am even going to go out on a limb and speculate (actually it’s more prognostication than speculation) that the Red Rocks will complete the hat trick with a third win over BYU this season, when the teams meet on The Hill for the gymnastics season opener on Jan. 8. Dr. Chris Hill may have to make a trip to the DMV office in Utah County and have BYU’s certificate of title transferred over to Utah, because at this point Utah simply owns BYU. 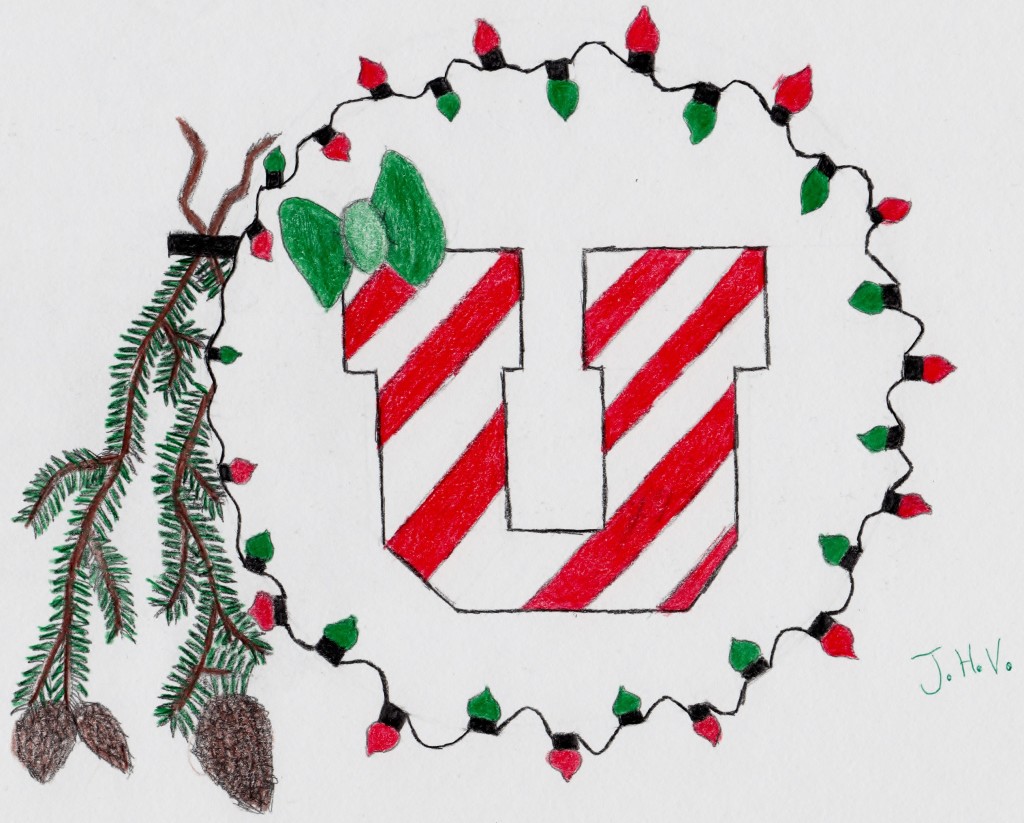