Police and emergency crews respond to the scene of an incident along Las Vegas Boulevard. A woman intentionally swerved her car onto a busy sidewalk two or three times and mowed down people outside a casino, killing one person and injuring at least 30 others, police said. Las Vegas, Nevada, Dec. 20, 2015. | AP Photo by John Locher, St. George News

LAS VEGAS (AP) — A woman with her 3-year-old daughter in the car smashed into crowds of visitors on the Las Vegas Strip, then drove to a hotel and told a valet to call 911 after killing a woman from Arizona and injuring dozens of others, authorities said Monday.

People jumped on the car and banged on its windows, but Lakeisha N. Holloway, 24, would not stop driving on the sidewalk, Clark County Sheriff Joe Lombardo told reporters. Video appeared to show the crash in front of the Paris and Planet Hollywood casino-hotels was intentional, he said.

The 1996 Oldsmobile sedan was fully on the sidewalk twice Sunday night, including once when it traveled for 200 feet, police said. The child in the car was not hurt.

The crash happened on a busy stretch of Las Vegas Boulevard across from the dancing water fountains of the Bellagio hotel-casino where visitors crowd sidewalks as they head from one casino to another. The Miss Universe pageant was being held nearby at Planet Hollywood.

Holloway drove a few blocks to a hotel, parked and asked a valet to call police, saying she had run over some people on the Strip, Lombardo said. She was stoic when she was arrested, he said.

Lombardo said police did not have a definitive motive but that they believe she had a falling out with the father of her child before the crash. A drug recognition expert on the scene determined Holloway was under the influence of a “stimulant,” but blood test results were pending.

Holloway last lived in Oregon and had been in Las Vegas for about a week, where she was believed to be homeless and living in the car, authorities said.

She faces a charge of murder with a deadly weapon and is being held without bail, prosecutors say. District Attorney Steve Wolfson said he also is considering a slew of other charges.

“When a person drives a 2,000-pound-plus motor vehicle intentionally onto a sidewalk, killing and injuring scores of people, that’s murder,” Wolfson said.

At least 35 people injured in the crash were taken to hospitals, including three people still in critical condition with head injuries, officials said

The crash killed Jessica Valenzuela, 32, of Buckeye, Arizona, according to Clark County Coroner John Fudenberg. The suburban Phoenix woman was visiting Las Vegas with her husband.

Victims hailed from Oregon, Florida, Colorado, California, Washington, Mexico, and Quebec, Canada. Five were Canadian citizens and four were Oregon college students in town to compete in a wrestling tournament.

Justin Cochrane, a visitor from Santa Barbara, California, said he was having dinner at a sidewalk restaurant outside the Paris hotel when he saw the car smashing into pedestrians.

“It was just massacring people,” he said, adding that the car appeared to be going 30 to 40 mph.

The Oldsmobile then went farther down the road and drove back into another crowd of pedestrians on the sidewalk, he said.

Cochrane said he couldn’t understand why the car went into the crowd a second time.

“Why would it slow to go around and then accelerate again?” he said. “I thought, ‘It’s a crazy person.'”

Cochrane said he saw children and adults injured on the ground as the car drove away.

The pedestrians were not in the road and were not at fault, police said.

Joel Ortega, 31, of Redlands, California, said he and his wife, Carla, were visiting for the weekend and found themselves blocked from walking on the sidewalk toward the Paris hotel. They could see police investigating about a block away from the crash.

“At first, I thought it was a movie shoot,” he said. “I thought maybe we’d see someone famous.”

But then they learned that it was a crash scene. Ortega said it made them remember how their Redlands neighborhood was disrupted after the Dec. 2 mass shooting in nearby San Bernardino, California.

The crash comes months after another woman was accused of driving into a crowd during Oklahoma State’s homecoming parade. Four people were killed and more than 40 were hurt Oct. 24.

In September 2005, three tourists were killed and nearly a dozen injured when a car barreled through the crowd on the Las Vegas Strip and crashed into a cement barrier in front of Bally’s hotel-casino.

Copyright 2015 The Associated Press. All rights reserved. This material may not be published, broadcast, rewritten or redistributed. 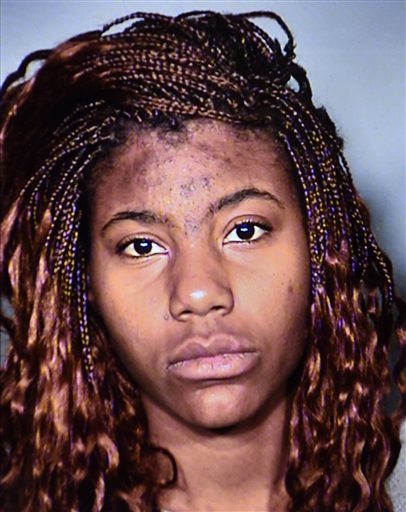 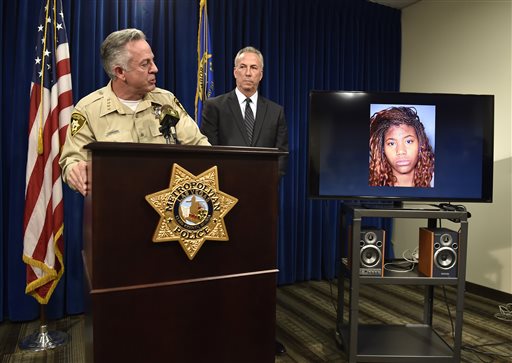 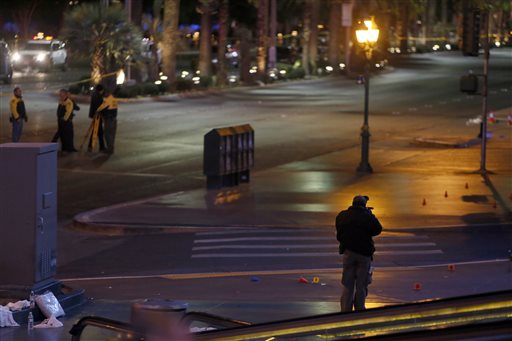 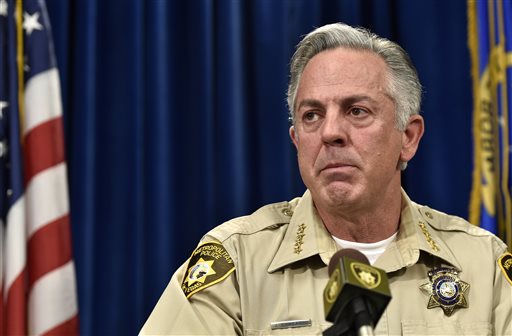 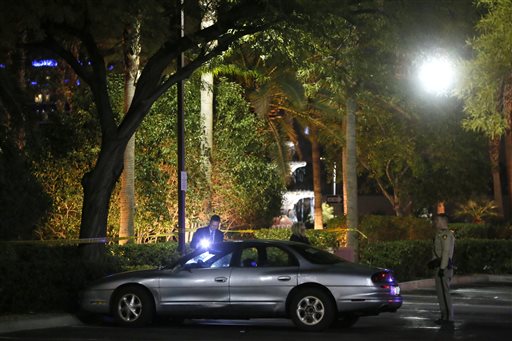 Las Vegas Metro police and crime scene investigators look over a sedan believed to have been involved in an incident where police said a woman intentionally swerved her car into pedestrians on the Las Vegas Strip, killing one person and injuring at least 30 others, Las Vegas, Nevada, Dec. 20, 2015. | AP photo by Steve Marcus, Las Vegas Sun via AP, St. George News