PROVO – Three players scored 20 or more points and Kyle Collinsworth recorded his eighth career triple-double in a 98-85 victory over Central Michigan in the Marriott Center on Friday night.

Zac Seljaas recorded a career-high for the second-straight game, this time with 25 points on 9 of 13 shooting and 7 of 9 from 3-point range. The seven 3s are the second-most ever by a BYU freshman. Chase Fischer scored 23 points and Kyle Davis added 20 of his own to go with six rebounds and four assists.

Collinsworth finished with 12 points, 10 rebounds and 10 assists to go with a block and a steal for his NCAA career-record eighth triple-double. He now has two more triple-doubles than anyone else since the stat was tracked by the NCAA beginning in 1980s. 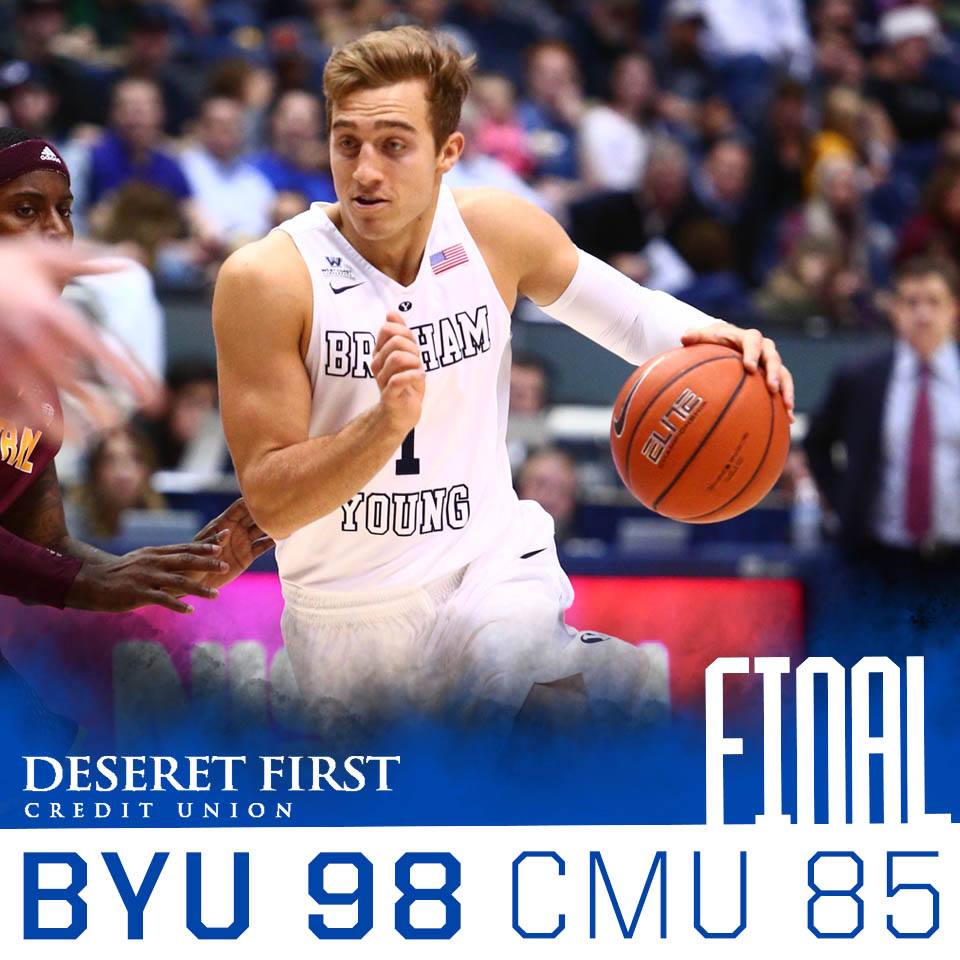 “We were playing a team that was really difficult to guard, doesn’t matter who is playing them,” BYU head coach Dave Rose said. “We changed a few things at halftime and got some of their non-shooters to do their 3-point shooting. Then we made some big baskets in transition.”

BYU never trailed by more than two in the game, but the Chippewas stayed in it with their outside shooting. Central Michigan attempted and made more than half of their shots from behind the arc – the first time a BYU opponent has done both this season. In fact, Central Michigan’s 17 3-pointers are a new Marriott Center record.

In the first half, a run five minutes into the game put BYU up by 10 at 15-5. A Nick Emery layup capped the run, which included a Fischer 3-pointer and two free throws from Davis.

Central Michigan tied the game at 35-35 before the teams went into half tied at 44. Emery and Fischer each scored in double figures in the first half with 11 and 12 points, respectively. Central Michigan’s John Simons and Josh Kozinski both had 12 points on four 3-pointers each.

In the second half, Seljaas scored 19 points, including eight straight at one point to put BYU ahead 65-57, a lead which BYU never relinquished. A late 7-0 run capped by a steal and breakaway dunk from Collinsworth stretched the lead to 88-75 after Central Michigan had cut it to five.

Collinsworth recorded his 10th assist for the triple-double with 1:04 remaining on Seljaas’ seventh 3-pointer of the game.

The Cougars had five players score in double figures and committed their fewest turnovers (6) in more than a year.

BYU travels to the Diamond Head Classic to take on Harvard in the opening round on Tuesday, Dec. 22. The game tips at 2:30 p.m. MST. The Cougars would face either Auburn or New Mexico in their second round matchup. The game will be televised on ESPNU and can be heard on the Cougar IMG Sports Network.