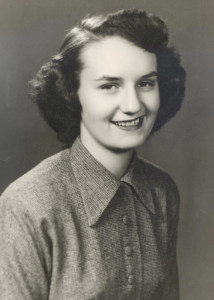 Gloria was born May 17, 1928, in Panguitch, Utah, to Ida Orton and Gloran K. Goulding. She was the oldest of three children. She attended school in Panguitch through the eighth grade. In 1942, her family moved to Payson, Utah, where she attended Payson High School for three years. In the summer of 1945, the family moved to Washington Terrace near Ogden, where she graduated from Weber High School in 1946.

Gloria had a beautiful alto voice, and as a child, she and her sister, Louise, sang and tap danced at various functions in town. She also learned to play the banjo and piano. Their cousin, Emma Orton, joined them when they were older, and the three of them sang at farewells for young men going off to serve in WWII.

Following her graduation, the family moved back to Panguitch, where Gloria soon found employment at local businesses in town followed by employment at the Grand Canyon and Sun Valley, Idaho Ski Resort. After returning to Panguitch, she was soon offered a job at the welfare office where she worked from 1947 to 1950.

Gloria married the love of her life, Laine Earl Sevy, Dec. 31, 1950, in Laine’s family home in Panguitch, Utah. The marriage was later solemnized in the Oakland LDS Temple. They moved to Northern California where Laine was employed. With short stops in Arnold and Jackson, they settled in Stockton. They were blessed with four children: Richard Laine, Bruce K., LeeAnne and Sandra Eileen.

She participated in the children’s school activities, swimming and piano lessons. From 1967 to 1985, she was the secretary of the art department at the University of the Pacific. She was an active member of the Diana’s Club, a service organization in town.

In 1988, Laine inherited his family home in Panguitch. In 1989, Gloria and Laine left their comfortable surroundings in Stockton and returned to Panguitch where they renewed old friendships and made new ones. They enjoyed fishing at Panguitch Lake and Otter Creek, as well as visiting the many scenic vistas in Southern Utah.

They were volunteers for the U.S. Forest Service at the Red Canyon Visitors Center for 10 years. They purchased a home in Santa Clara for a winter retreat and became snowbirds. Life in Santa Clara was enjoyed to the utmost — they made many new friends and visited more of the scenic wonders in the area, often accompanied by Gloria’s mother and father-in-law.

Gloria was a lifetime member of the LDS Church. She participated and helped lead Primary, Mutual and Relief Society. She enjoyed being a visiting teacher and singing in the choir. With Laine, they helped initiate the local LDS employment service program and participated in it for five years. Her most enjoyable and heart-felt time was working as an ordinance worker in the St. George Temple.

Gloria is survived by her husband of 65 years, Laine; sons, Richard (Vickie) of Kaysville, Utah, and Bruce K. of Denver, Colorado; daughter, LeeAnne (Randy) Bunn of Quartz Hill, California; sister, Louise Crosby of Leavenworth, Kansas; seven grandchildren; and 15 great-grandchildren, She is preceded in death by her daughter, Sandra; parents; and brother, Joseph.

Interment will be in the Panguitch Cemetery. Arrangements entrusted to the care of Metcalf Mortuary, 435-673-4221. Please visit their website for condolences, complete obituary and funeral listings.