ST. GEORGE – In 1915, the state of Utah ordered Washington County to organize the dispersed schools of the area into a unified whole, and the Washington County School District was born. In that year, there were 1,833 students. Now, 100 years later, the school district has grown, with more students, schools and teachers.

Monday, Dixie State University honored the school district with a reception marking its centennial. The gathering was held in the Dolores Dore Eccles Fine Arts Center on campus.

DSU President Richard Williams and Washington County School District Superintendent Larry Bergeson began the ceremonies by cutting a cake shaped like the historic Woodward School, constructed between 1898 and 1901 before the district was formed. Williams then gave a few remarks about the school district and his working relationship with Bergeson.

Williams said that he and his family had moved from Indiana approximately one year earlier, and in that time his children have excelled and found a nurturing environment in their respective schools in the district. He told the story of how he had teased his son about moving back to Indiana. His son was resolute in his desire not to return and expressed his love for the area, Williams said.

Throughout his speech Williams emphasized the importance of the relationship the university has with the district.

“On behalf of Dixie State University, we do want to thank you for being a partner in education with us, we value you and appreciate all that you do,” Williams said.

Williams then presented Bergeson with a sandstone sculpture inscribed with the words “Partners in education for a century and counting. DSU 1915 – 2015.”

“We wanted provide something to remind us of our foundation here in the red rocks of Dixie,” he said before handing the sculpture to Bergeson.

Bergeson accepted the gift and joked that he was pushing his own limits carrying the sculpture due to his recent back surgery. He thanked the audience for attending, as well as former superintendents and legislators. He thanked Williams personally and spoke of how their professional relationship had evolved into a close friendship.

“We are close,” Bergeson said. “We talk often. We are friends … we go to ballgames together.”

Bergeson described the evolving relationship the district had developed with the many people and entities within the county and the state: mayors, school board members, the city councils, and the Utah Office of Education.

“We have such a working relationship that allows us a real advantage as we do the work that we do,” Bergeson said. “We appreciate each one of you and the association we have with you.”

After the remarks were finished, Williams told St. George News that having the superintendent of a school district as a member of the board of trustees for the university is a big benefit.

“It has been such a value-added aspect of our relationship because he can really share with us what we can do as a university to affect the students and the school district as a whole,” Williams said.

Williams said that the Washington County School District compares favorably to the district he left in Indiana.

“I think our school district provides a lot of opportunities that I haven’t seen,” he said. “Here they provide a lot of different opportunities for our students to learn outside of the classroom.”

Having his children enrolled in schools in the Washington County School District, Williams said, gave him a deeper insight to how the district functions.

“Being a parent,” Williams said, “having four children in the school district, I’ve been very pleased with the level of education my sons and daughters get.”

The university is very excited about the projected growth of Washington County and its potential effect on the school district, Williams said, adding:

We’re excited … because we see that (growth) as potential students for Dixie State University. A lot of the families that move here want to stay here. We want to provide as many educational opportunities for those students who want to stay right here in St. George. I think it’s a win-win for everyone.

Washington County School District has progressed from its historical roots, Bergeson said, yet still retains the same core values it had at its inception, adding:

We’ve come a long way as far as enrollment and what education looks like and how we’re addressing the needs of kids, from the standpoint of modern technology. But we’re still doing the same things as far as we still watch out for kids, we try and teach character education, we try and prepare them as well for the next level. We want them all to become responsible citizens but also be able to attain gainful employment. We’ve come a long ways as far as what it (education) looks like, the effort and the intensity with which we’re called upon to do the work today.

Bergeson emphasized the importance of the community relationships the district has developed, mentioning DSU, Dixie Applied Technology College, the Legislature, city councils and the mayors.

“In this community it makes a big difference,” he said.

DSU Dean of Students Del Beatty stated both he and the university have a great appreciation for the school district.

“They send us great students,” Beatty said. “It’s been fun because we’ve been able to grow along with the district. Dixie State has become a school of choice for many of the local kids that are graduating from the local high schools. That’s what we want, to be their school.”

Beatty, who has been dean for seven years, said changes the district has undergone have been noticeable, pointing out the opening of Desert Hills High School and the expansion of other schools. The relationship the university has developed with the school district has grown stronger, he said, allowing DSU to focus its attention on local students. In years past, he said, there was an erroneous assumption that the locals students would automatically pick Dixie as their college but that wasn’t necessarily the case.

“So we’ve really tried to target them and make them feel welcome,” Beatty said, “and have them on our campus as much as we can so they can feel comfortable in make us their higher education destination of choice.”

Former Washington County School District Superintendent Jack Burr was also in attendance at the affair Monday. The district had progressed dramatically from his tenure as superintendent, Burr said, which lasted from 1979-1984.

“For a while we were closing schools,” Burr said. “Santa Clara elementary and Washington; then it started to grow and we had to build schools in both places. The community is much larger, and much more diverse.”

One of the challenges to the district moving forward would be to keep the community actively engaged in the education process, Burr said.

“I think with the diversity,” he said, “(it’s) getting everybody to be a part of the system – I’m talking about parents, students, everyone.”

“I think overall the quality of education in this community has been very good. To try and keep that quality is a challenge,” Burr said. 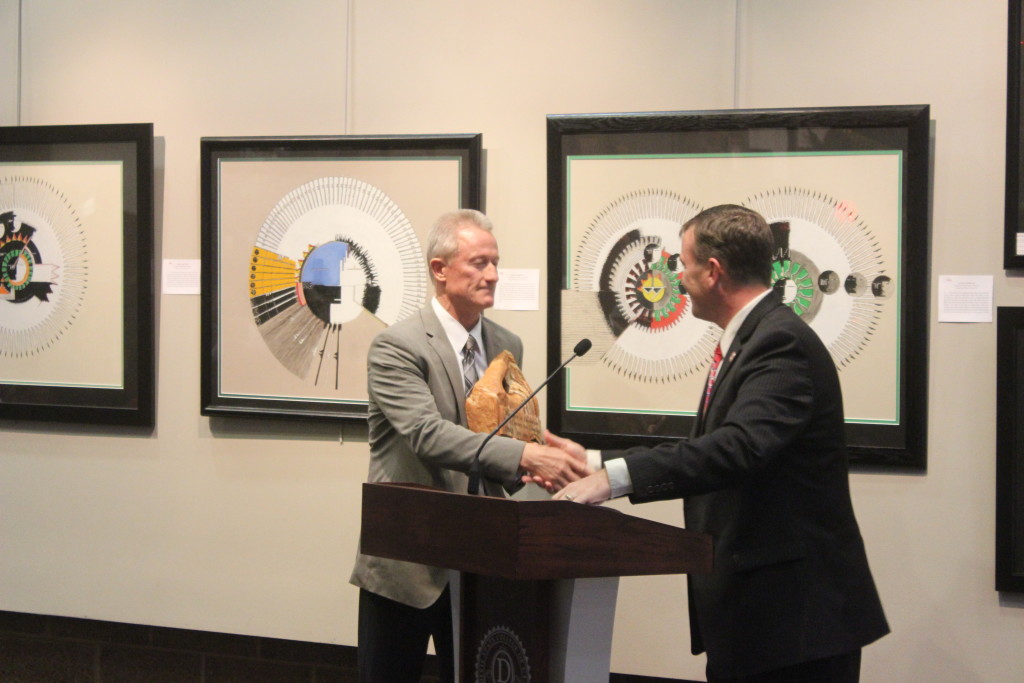 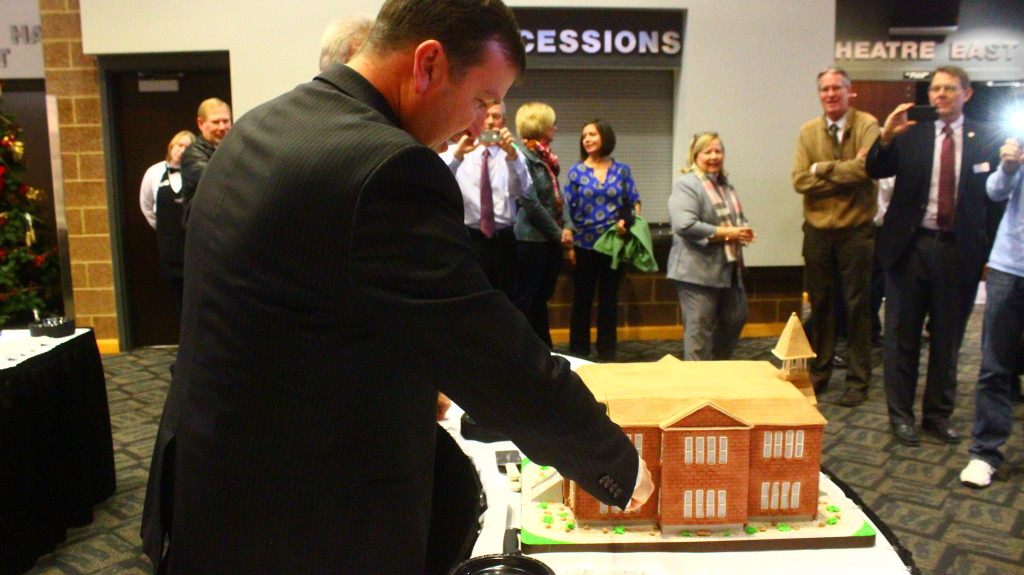 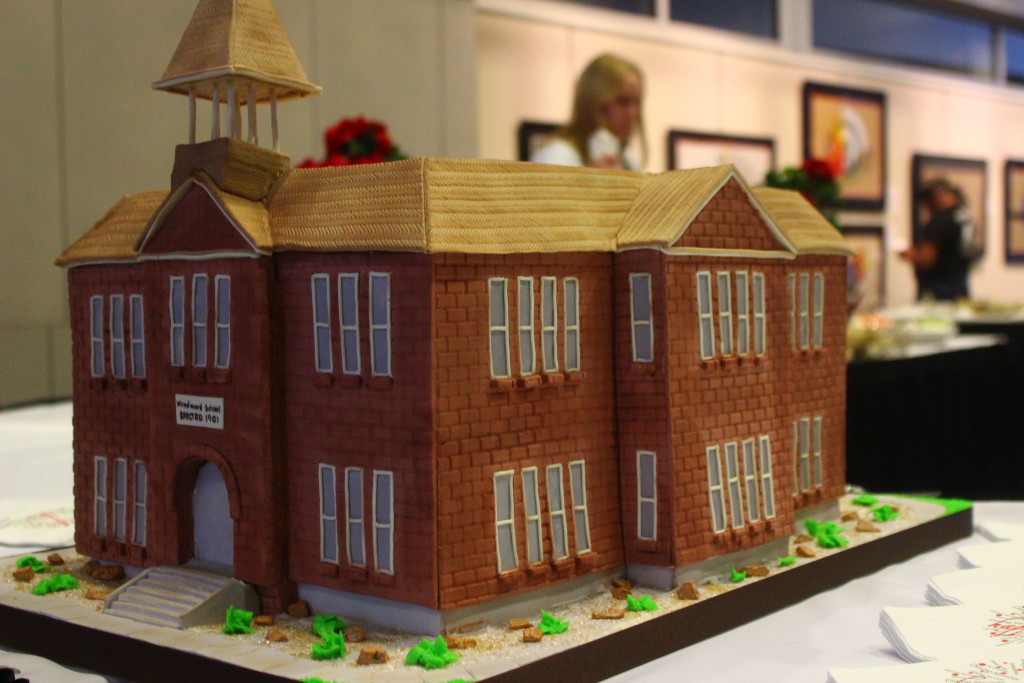 This photo shows a cake baked to replicate the Woodward School in St. George. According to the Washington County Historical Society, the Woodward School was constructed between 1898 and 1901, when its doors opened. It was named after George Woodward, a childless resident, who had served as chairman of the school board during the construction. "The school was a real change from the previous schools," the society's Web page regarding the school states. "There was a lot more space, the classrooms had blackboards on three walls, they had radiator heat rather than pot-bellied stoves that were either too hot or too cold …." The cake was offered at a reception honoring Washington County School Disrict's centennial. Eccles Fine Arts Center, Dixie State University campus, St. George, Utah, Dec. 7, 2015 | Photo by Don Gilman, St. George News 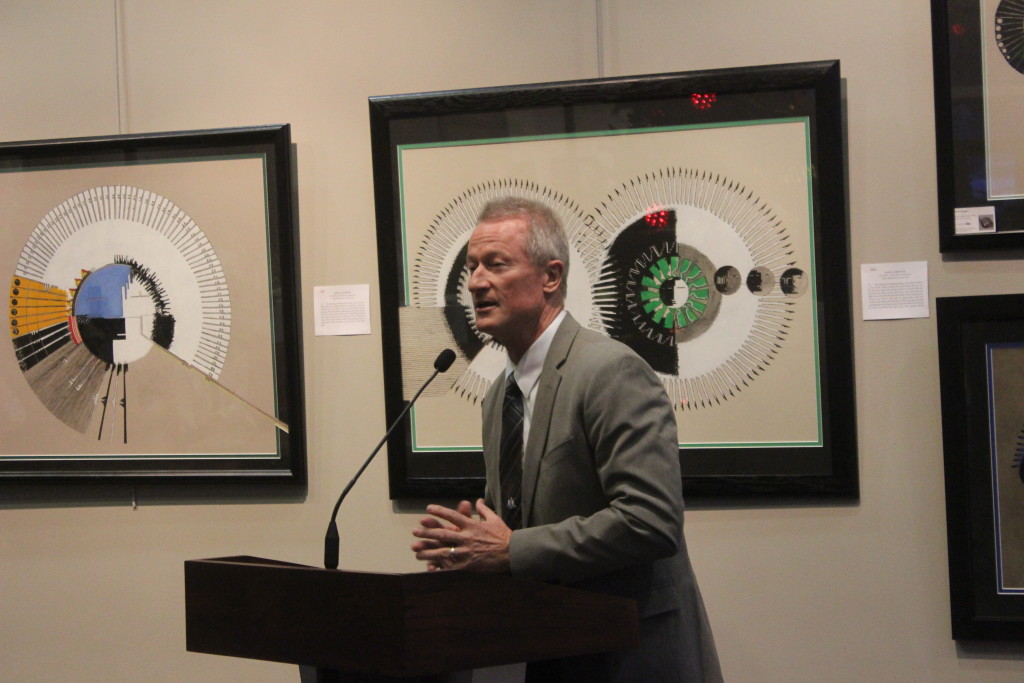 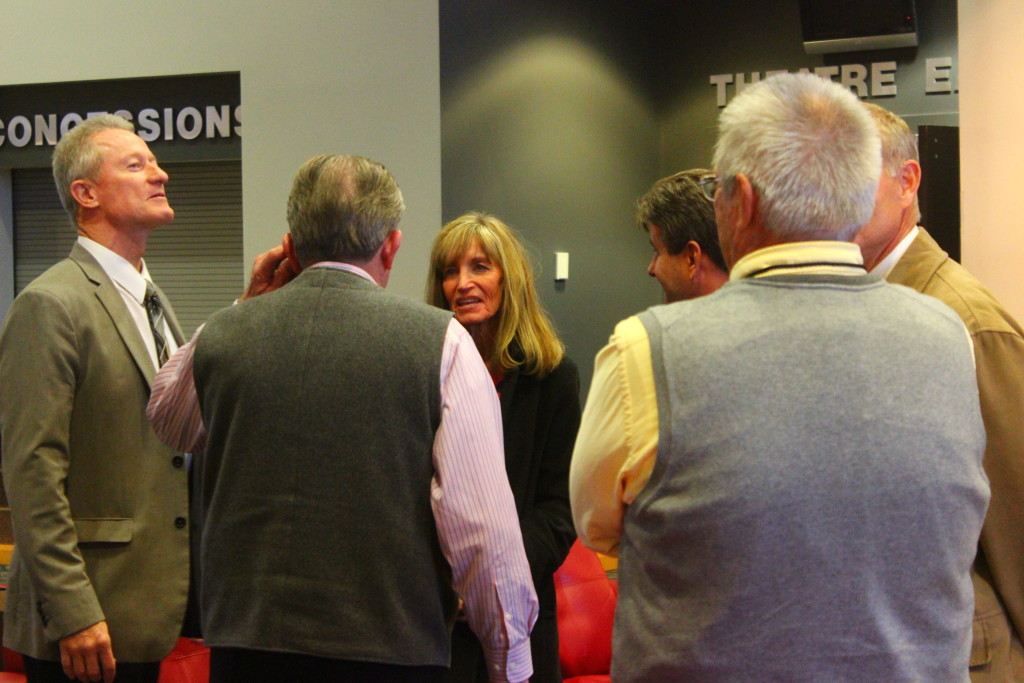 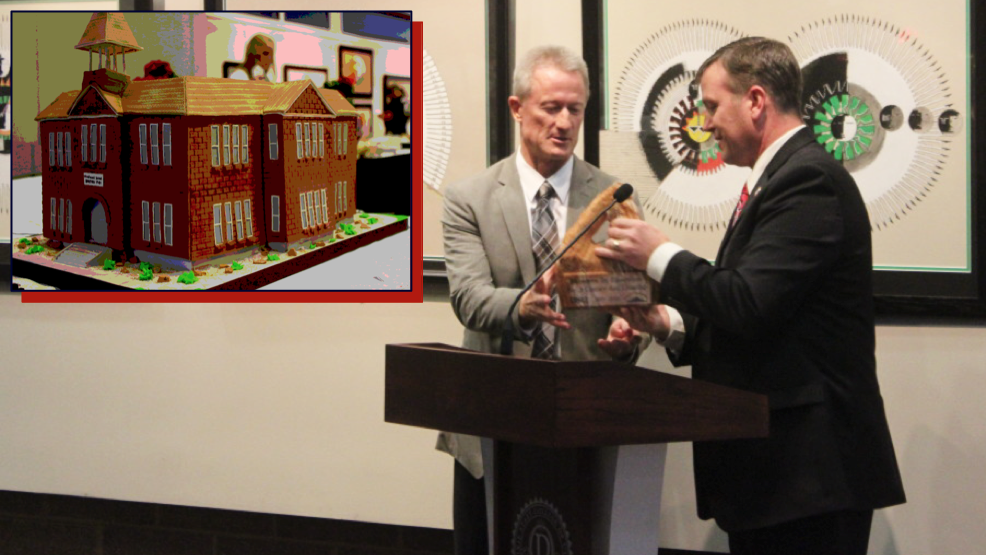 Deadly choking games and teens; how school districts, police are facing the issue