To the “U” and “Y” Vegas is calling
Before long the Cougars will be falling
The “U” will rock all night, wearing their red and white
But the “Y” will have a blue, blue Christmas

COMMENTARY — If you haven’t heard by now, my daughter’s dreams of spending the holidays in southern California for a Holiday Bowl/Disneyland combo extravaganza have been shattered. Instead, Utah will be playing BYU in the Royal Purple Las Vegas Bowl on Saturday, Dec. 19.

Even though the Utes and the Cougars share seemingly identical 9-3 records, like my daughter, many Utah fans are disappointed that their team has been relegated to the Las Vegas Bowl, whereas BYU fans are generally elated. If you take a look behind the numbers and the seasons these two teams have actually had, including the potential and missed opportunities, it isn’t hard to understand why Ute fans are still trying to figure out How the Grinch Stole Christmas while Cougar fans are joyously packing their bags for a Christmas Vacation. 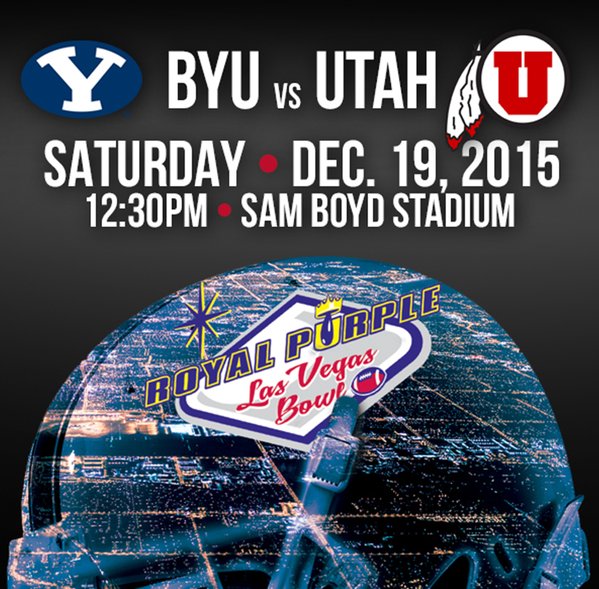 Utah has been included in the official College Football Playoff Rankings each week this season (and in fact every week such rankings have been in existence over the past two years), rising as high as No. 10 on Nov. 10. The Utes and are currently sitting at No. 22 in the most recent rankings. BYU hasn’t appeared in the College Football Playoff Rankings all year long. The simple truth is that the Utes were only a couple of plays away from playing for the Pac-12 Championship, and potentially being considered for the four-team playoff. Other than two last minute Hail Mary wins to start the season, the Cougars have received precious little national attention.

The teams’ 9-3 records are not necessarily on equal footing either. Utah’s schedule included three teams that ended the season ranked in the College Football Playoff Top 25, and the Utes beat two of them — No. 14 Michigan and No. 15 Oregon (with the 62 points racked up by Utah being the most points ever scored by an opponent in Autzen Stadium). BYU’s schedule included a single team that ended the season in the Top 25 — No. 14 Michigan (which pummeled the Cougars 31-0).

Oh yeah, BYU also had Wagner on its schedule.

The good news is that rather than just bantering back and forth about strength of schedule, common opponents, etc., the Utes and the Cougars are playing a head-to-head, winner take all (in terms of the rivalry) game in Las Vegas on Dec. 19.

I have been sorely disappointed that Dr. Chris Hill suspended the annual rivalry game between Utah and BYU (and yes, I firmly believe the ultimate decision was Dr. Hill’s, as the Cougars have become that kid on the block who will play with anyone willing to play with them, and would have gladly replaced Wagner or any other number of teams on their schedule this year with the Utes). While I had not anticipated a post-season matchup this year, I’ll take it, and smile all the way to and back home from Vegas.

The biggest challenge for Utah is going to be looking past its disappointment in falling all the way to the Royal Purple Las Vegas Bowl instead of one of the more prestigious bowl games in which it could have been playing, and treating this like the rivalry game that it is.

Kyle Whittingham is not crying over spilled milk, and is looking forward to the bowl game: “After being nationally-ranked since the second week of the season and finishing as co-champion of the Pac-12 South Division, we are looking forward to our ninth bowl game in the last 11 seasons. Las Vegas is a great destination for our fans and the bowl organizers work hard to make it a memorable experience for the players.”

Andy Phillips, who, similar to Whittingham, has family ties to BYU, fully understands the implications of this post-season rivalry matchup. “Obviously, we’re excited because it’s a rivalry game,” he said. “There is a lot of emotion involved.”

Even players from outside the state of Utah, who have never played in the rivalry game, are quickly being brought up to speed by teammates. “They told me that it’s a game to remember,” said Gionni Paul, who hails from Florida. “We always talk about leaving a legacy of being one of the top teams in Utah history and playing BYU could help us do that.”

Speaking of rivalry matchups, this past week the Runnin’ Utes and the Cougars met on the hardwood floor on The Hill. After taking a commanding 51-28 lead at halftime, Utah took its foot off the gas and allowed BYU to close the gap to as few as six points. The Runnin’ Utes ultimately won by eight. Jakob Poeltl had 26 points, 13 rebounds, and 5 blocks, as he showed why he has been named to both the Naismith Trophy and Oscar Robertson Trophy watch lists.

Utah has two marquee matchups on the road as part of its remaining non-conference schedule — Wichita State this Saturday and Duke in Madison Square Garden on Dec. 19 (the same day as the Las Vegas Bowl).

Here’s hoping Ute fans get an early Christmas present on that December Saturday when Utah buries BYU like a mob snitch on the outskirts of Vegas, and the Runnin’ Utes chip in with some big wins to make it a happy holiday season.