ST. GEORGE — One man was arrested and an officer injured after a routine traffic stop for speeding turned into a foot pursuit in St. George Sunday afternoon.

Freddie Lamont Prentiss was southbound on Riverside Drive around 1:30 p.m. when St. George Police pulled him over for speeding.

After pulling into the parking lot of The Church of Jesus Christ of Latter-day Saints chapel on East Riverside Drive, St. George Police Sgt. Spencer Holmes said, the officer performing the traffic stop smelled the odor of marijuana when making contact with the driver, later identified as Prentiss.

At that point, Holmes said, the officer called for backup and a second police officer assisted with a drug investigation and vehicle search. While the search was in progress, Prentiss made a run for it and a foot pursuit ensued, but he was quickly apprehended and placed under arrest.

While handcuffed, Prentiss again tried to flee police custody, Holmes said, but was apprehended and secured.

One officer involved in the initial foot pursuit suffered a knee injury and was treated at Dixie Regional Medical Center in St. George, Holmes said.

Prentiss said he suffered a broken leg as he fled from police in handcuffs, Holmes said, and was accordingly taken to Dixie Regional Medical Center. After treated being treated for minor scrapes and bruises, Prentiss received medical clearance for transport to jail.

This is a developing story as matters remain under investigation, Holmes said, noting that additional charges are pending. 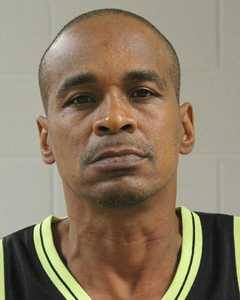