Following is the text of Lee’s speech as prepared for delivery:

She was the first woman to serve as Utah’s Governor, worked as Lieutenant Governor for over 11 years and was a member of the Utah legislature for eight years.

Olene Walker will be remembered and revered by Utahns — not because of the many “firsts” she pioneered in politics — but for her commitment to leave a legacy of public, and more importantly, private service based on principles that truly last.

Olene Walker’s life and career were centered in the principles of life-long learning, selfless service and making a difference through civil discourse and meaningful dialogue. 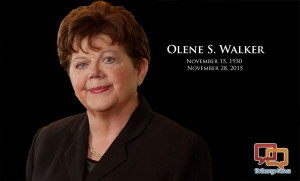 Governor Walker believed that the best way to open a mind was to open a book. Immediately upon becoming governor she launched her “Read with a Child” program — focused on getting adults to read with a child for 20 minutes every day.

She knew that 20 minutes of daily reading would not only transform children across the state by getting them to read at or above grade-level, but would transport them to magical places, big ideas and brighter futures.

Because she became governor at the age of 73, and as a grandmother, I think she also recognized that 20 minutes of reading with a child would inspire the adults in the State of Utah, as well. Governor Walker was never far from a book, or a group of children to read to, often choosing her personal favorite from Dr. Seuss, “Oh the Places You’ll Go.”

Governor Walker went many places in her public service but sent thousands and thousands of Utah children on adventures never to be forgotten in the wonderful world of good books. She was living proof that books expand the mind and that a mind expanded, especially the mind of a child, could never return to its original state.

I was inspired when reading her obituary that the last line, in typical Olene Walker style, stated, “In lieu of flowers, please read with a child.” Her commitment to the principle of life-long learning is a legacy in and of itself.

Governor Walker also understood that it didn’t really matter where she served, but how she served. Whether working alongside her husband in the family snack business, in the legislature or Governor’s office, Olene Walker knew that her time on this earth would never be measured by the titles she held but by the impact and influence she had on others.

She understood and lived the adage, “We are to live our lives not by days, but by deeds, not by seasons, but by service.

After leaving the Governor’s mansion, she participated in literacy forums, served an LDS mission with husband in New York and at an age when most people slow down, Olene Walker took on a new and many would say, “daunting,” challenge of leading dozens of 3- to 11-year-old children for two hours every Sunday in her LDS congregation.

Governor Walker served with confidence, charisma and a charm that was elevating and enlightening. National political players, rural farmers, business executives and children were inspired by her energetic approach and responded to her invitation to engage because they sensed that what they were about to experience was not about Governor Walker — it was about them.

In an age of ego maniacs and narcissists Olene Walker’s example of selfless service in high office is a model for all to follow.

Governor Walker also understood the principle that mean-spirited arguments produce little while meaningful dialogue creates much.  She was known for her disarming style and her ability to pull people into a conversation.

She believed and lived by a motto my offices is committed to — that the solution to any, and every problem, begins when someone says, “Let’s talk about it.”

Olene Walker challenged political candidates, elected officials of both parties and young people in particular to transcend the talk-radio style bombast and personal attacks in favor of civil, serious and substantive discussions.

The Olene S. Walker Institute of Politics and Public Service, at her beloved Weber State University, is a testament to her commitment to make a difference through more meaningful and deeper dialogue.

A picture taken of Olene Walker taken inside the Governor’s mansion contains an interesting image that illuminates much of what Olene Walker was really all about. Resting on a desk in the background of the picture is a statue of a vibrant, energetic, pioneering Brigham Young — he is walking swiftly, leading with staff in hand, eyes set on a bright future as he began the audacious endeavor of being the first to establish a lasting society in the tops of the rocky mountains.

In the picture, the statue of Brigham Young almost appears to be trying to keep up with Governor Walker. Only Olene Walker could get a trailblazing Brigham to pick up the pace. Governor Walker, likewise, was a pioneer and trailblazer — moving swiftly, leading, with a clear vision of a better society — guided by her principles of life-long learning, selfless service and civil dialogue.

Her life of many firsts will be celebrated and emulated for generations to come because it was founded on, and inspired by, such principles — principles which truly last.

Gov. Herbert looks back at the start of the COVID-19 pandemic