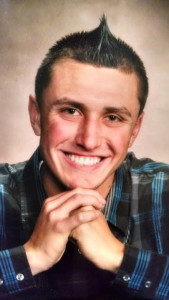 James Michael Bright, 23, of St. George, returned back to his Heavenly Father on Saturday, November 7, 2015. He is our beloved son, brother, father and friend to many. He was born on June 20, 1992, in Salt Lake City Utah, the son of Rick and Theresa Bright.

He graduated from Copper Hills High School in 2010. James was offered many baseball scholarships which he sacrificed for his daughter who he loves dearly. James loved baseball; he played from the time he was in kindergarten all the way through his senior year. He was a great baseball pitcher, and of course he was the best in our eyes. He always made the all-star team and James was recognized as being one of the top players in Utah.

He had a passion for bowling and competed in several tournaments. James loved to bass fish and out fished his dad on numerous occasions. Some of his interests were cooking, camping, working out and always goofing around!

James had one of the biggest hearts and the most contagious smile.

James is survived by his parents Rick and Theresa of St. George; daughter Lacie; sister Tiffany; brother Ricky; Cheyanne Renfeldt which he considered a sister; and grandparents Randy and Linda DeAx.