SAN JOSE, Calif. – Defensive back Michael Wadsworth prevented a two-point conversion to shut down a San Jose State comeback and give BYU football a 17-16 win on Friday night at Spartan Stadium.

With 45 seconds left in the game, SJSU quarterback Kenny Potter rushed six yards to the pylon for six to make it a one-point game. San Jose State went for the win and attempted the two-point conversion with a halfback pass. Wadsworth read the play and was able to get a hand up to disrupt the pass and the ball fell to the turf to preserve the lead.

The Spartans tried for the onside kick and 6-foot-6 BYU wide receiver Mitch Mathews out-jumped San Jose State’s hands team and knocked the ball out of bounds, giving possession to the Cougars to seal the win.

BYU (7-2) tallied 329 total yards, outgaining San Jose’s (4-5, 3-2 Mountain West Conference) 269 yards. The teams were equal in sacks and turnovers with three and one apiece on a night that saw its up’s and down’s. The Cougars dominated the pass game with 293 compared to the Spartans’ 147. 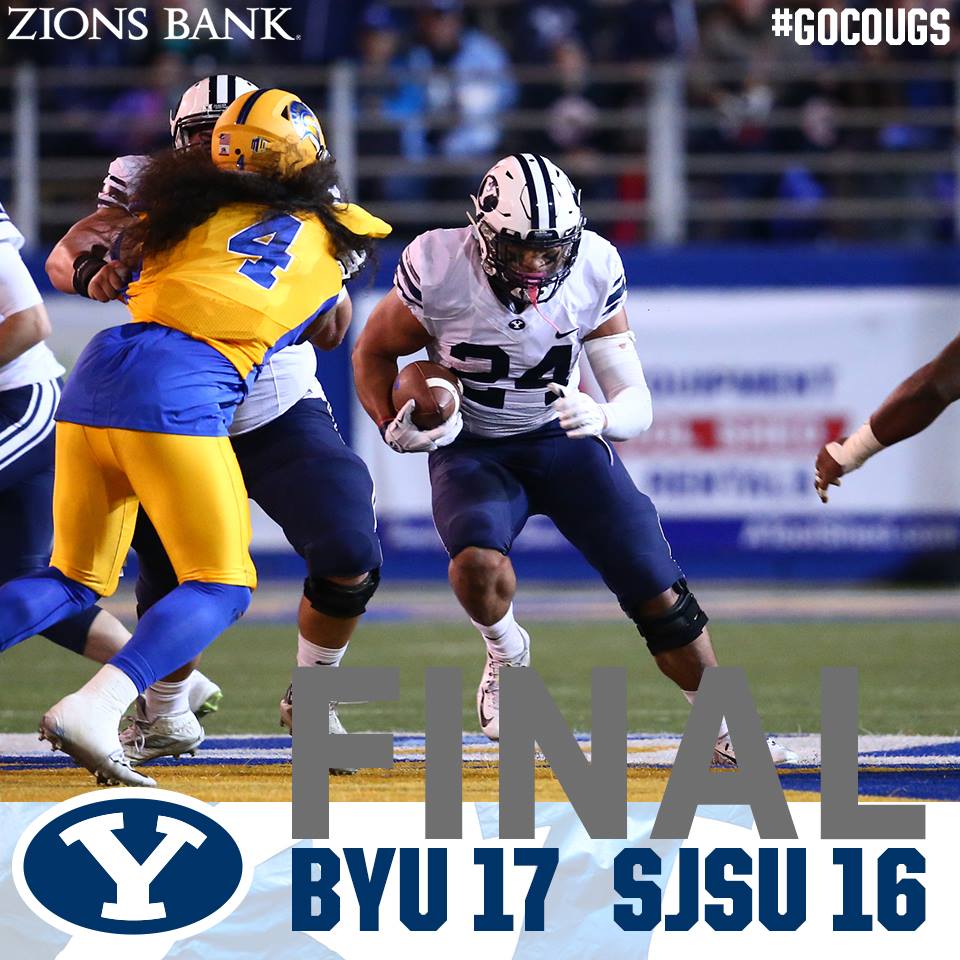 Wadsworth led the defense with 10 total tackles in the win. Fred Warner had two sacks to go along with his eight tackles. It was a bit of redemption for the BYU safety, who was called for a personal foul on SJSU’s late scoring drive.

Tanner Mangum went 23 of 37 for 293 yards, one touchdown and one interception. Devon Blackmon notched 102 yards on six catches, his third 100-yard receiving game. Mitch Mathews caught the lone receiving touchdown in the game as one of four receptions totaling 62 yards.

San Jose marched down the field in its first possession to first and goal, but BYU’s defense held them to a field goal afterBronson Kaufusi and Jherremya Leuta-Douyere sacked the quarterback for a loss of 12 yards.

The Cougars’ answered with in a 4-yard touchdown pass to Mathews from Mangum with 10:07 left in the first quarter to take the 7-3 lead after a 10-play, 75-yard drive. Mathews also had a 19-yard reception in the drive to set up the scoring play.

The second series for BYU’s offense resulted in its second touchdown of the game. A couple of key receptions by Blackmon, one for 5 yards and the other for 16 yards, set up Algernon Brown to rush 5 yards for a score to extend the lead to 14-3 with 10:12 remaining in the second quarter.

Neither team’s offense was able to stay on the field for the majority of the second quarter. The Spartans sacked Mangum in two different series on third down to force the Cougars to punt.

When San Jose attempted to convert on fourth down inside of BYU territory, the ball was fumbled and recovered by Warner.

BYU’s final drive of the first half took a turn when Mathews nearly had his second touchdown of the game jarred loose by SJSU’s Cleveland Wallace III in the endzone. On the next play Mangum was intercepted by Wallace III, who then ran it 61 yards for a touchdown, leaving the halftime score at 14-10.

Neither team put together much offense in the third quarter and BYU’s defense held SJSU off the board again after a missed 46-yard field goal.

To start the fourth quarter, Mangum found Nick Kurtz for a 16-yard gain. A huge catch by Blackmon for 24 yards set up Trevor Samson for the 31-yard field goal to extend the lead to 17-10 with 11:21 left in the game.

The field goal proved to be the difference after SJSU mounted a touchdown drive on its final possession. The Spartans capitalized on a 34-yard quarterback run on a 4th-and-1 when Kenny Potter rolled outside of the BYU defense and got loose. The play set up the Spartan score but Wadsworth had the final say with the pass breakup on the two-point try.

The Cougars hit the road again next week to face Missouri at Arrowhead Stadium in Kansas City, Missouri on Saturday, Nov. 14. The game will kick off at 6:30 p.m. CST and will be live on the SEC Network.